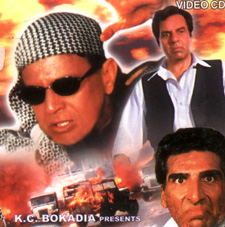 Christopher Domingo / fullhyd.com
EDITOR RATING
1.0
Performances
Script
Music/Soundtrack
Visuals
NA
NA
NA
NA
Suggestions
Can watch again
NA
Good for kids
NA
Good for dates
NA
Wait to rent it
NA
Things just seem to be going from bad to worse. It's flop after flop, but Mithun's films come to torture with unfailing regularity. A miracle for him, but a disaster for unsuspecting viewers. Though this dig might seem in bad humor, one hopes that the sandalwood smuggler goes through with his dare. It is not just the histrionics of this star but also the total absurdity of his films that bring out such dark emotions. Till the day that he decides to stop, we have no choice but to suffer this cinematic terror.

Ayesha (Shaina) is a pretty little garage owner who attracts her customers by dressing up in teeny-weeny skirts and tops, and, sure enough, does some whopping business. Then, one fine day, she is threatened by the local goons, and is pressurized to sell her land. And lo, on the scene appears the savior (Kabira) in disguise and with a kid on his shoulder, and gives the ruffians a belting to be remembered. He also happens to be a mechanic, and is hired to protect and serve not only the business but also Ayesha's romantic fantasies.

Then the question round begins. Who actually is Kabira? Is the kid his? Why is the underworld so scared of him? And why is the film called Sultan?

All is answered in a monotonous filmi style; Kabira is actually Inspector Abhimanyu who goes against the wishes of his Godfather Sultan (Dharmendra), an ex-cop who, disillusioned by the system, becomes a self-styled don who helps the down-trodden. But the forces of evil, headed by Roop Shankar (Mukesh Rishi) and brothers, destroy Abhimanyu's family, and Sultan sacrifices his life trying to save them. This time it is Abhimanyu's turn to be disillusioned by the law, and he adopts Sultan's kid and takes his place as the don. When the kid asks him to give up his violent life, he becomes Kabira. Confused? Not a problem, everyone is and will be. Once Kabira's true identity is revealed, it is time for the final conflict, and Kabira, a.k.a. Sultan a.k.a. Abhimanyu, conquers all evil.

The music is by Bappi Lahari - need we say more? - and the direction of T L V Prasad leaves a lot not to be desired - like the memories that now need to fade away from my scarred psyche (a sincere desire if I had any). Mithun is loud, repetitive and boring, and the same goes for the rest of the cast. This one is strictly for die-hard Mithun fans.
Share. Save. Connect.
Tweet
SULTAN SNAPSHOT

ADVERTISEMENT
This page was tagged for
Sultan desiremoves.in
sultan desiremovies
desiremovies sultan
Mithun ka Sultan picture
Sultan picture Mithun
Follow @fullhyderabad
Follow fullhyd.com on
About Hyderabad
The Hyderabad Community
Improve fullhyd.com
More
Our Other Local Guides
Our other sites
© Copyright 1999-2009 LRR Technologies (Hyderabad), Pvt Ltd. All rights reserved. fullhyd, fullhyderabad, Welcome To The Neighbourhood are trademarks of LRR Technologies (Hyderabad) Pvt Ltd. The textual, graphic, audio and audiovisual material in this site is protected by copyright law. You may not copy, distribute, or use this material except as necessary for your personal, non-commercial use. Any trademarks are the properties of their respective owners. More on Hyderabad, India. Jobs in Hyderabad.