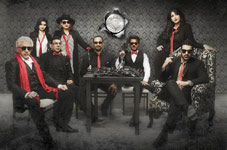 Nupur Barua / fullhyd.com
EDITOR RATING
6.0
Performances
Script
Music/Soundtrack
Visuals
7.0
5.0
6.0
6.0
Suggestions
Can watch again
Yes
Good for kids
No
Good for dates
Yes
Wait to rent it
No
Unless you live under a toadstool, you have had more than your fair share of trailers and teasers that warn you of the type of movie Welcome Back is. You know what to expect, and set your standards accordingly. And if you are a Welcome fan, then half the battle is won, as far as expectations are concerned. The sequel to Anees Bazmee's Welcome is as bizarrely mind-numbing as the original, more chaotic, and great fun, if you have a funny bone.

Uday (Nana Patekar) and Majnu (Anil Kapoor), whose relationship transcends the thickest blood, find their camaraderie threatened. A mother-daughter duo, the Maharani Poonam (Dimple Kapadia) and the Rajkumari Babita (Ankita Srivastava), has managed to drive a wedge between them. Both are in love, or so they think, with Babita. What they don't know and you do, is that Poonam and Babita are con women.

The relationship is saved by their mutual concern for Ranjana (Shruti Haasan), who is Uday's father's third wife's daughter. It is now their responsibility to see her settled in.

In a strange sequence of events, Ranjana falls in love with a hooligan named Ajju Bhai (John Abraham). She knows what Uday and Majnu expect in a brother-in-law, so Ajju pretends to be the son of a respectable man. That man is Dr Ghungroo (Paresh Rawal), and before you can say "Welcome Back", the original trio of the first movie are reunited under uncannily similar situations.

Of course, Ajju's true colours surface too soon, and now Uday and Majnu want to avenge the fact that they were taken for fools. Which is why they turn to Wanted Bhai (Naseerudin Shah) for help. Big mistake, as they discover, since Wanted's drug-addict son Honey (Shiney Ahuja), who is obsessively in love with Ranjana, wants her as compensation for getting rid of Ajju.

Once you have your head wrapped around the complicated network of relationships, you can sit back and laugh at every little silliness as it unfolds on the screen. The star of the movie is the dialogue writer (Raaj Shandilya), whose one-liners and smart retorts make the movie a roller coaster ride of hilarity that threatens to split your sides.

The story is almost a carbon copy of the first film, with a few additional characters thrown in. That is the only disappointment, but the familiarity with the screenplay also makes it easier for faithful audiences to understand the otherwise complicated list of characters and events. You are ridiculously pleased that you can predict the outcome of several plot points (thanks to your experience with not only the previous Welcome, but many other movies), and still act surprised when things fall into place. Predictably, though, the laughs reduce after intermission, and the slapstick begins to irritate.

Nana Patekar, with a double role cameo (appears as an older version of himself for a bit), is subtle and aggressive. He has terrific chemistry with Anil Kapoor, the latter being the epitome of youthful energy. Both the senior actors steal the limelight, even from Naseerudin Shah, who is slightly restrained.

Shruti Haasan has decent comic timing, but she is let down a bit by her co-star John Abraham. The latter is too wooden to be spontaneously comic, but he works as the badass goon. Shiney Ahuja, back on screen after many years, is a convincing drug addict. Dimple Kapadia is pretty much redundant in the story, and Ankita Srivastava loses the interest of both the men she tries to seduce, as well as the interest of the audience, very soon.

With in-your-face locations and music videos, Welcome Back may hurt your eyes and ears, but you may find that it is all worth it in the end. It helps if you are a fan of either Anil Kapoor (specially Anil Kapoor) or Nana Patekar, or both. They make the non-existent story come alive, and everything else, including the inanely loud opulence, fades away when they are on screen. You do not even notice the lack of an original story, and slapstick has never seemed funnier (unless you are a real comic snob).

Have fun this weekend, as you welcome back the goons with a heart of gold, who have been struggling to establish themselves as respectable men for years now. 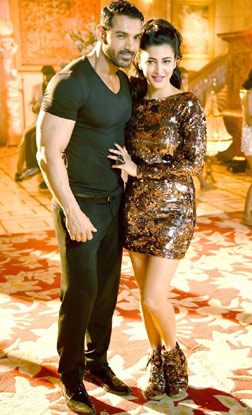 ADVERTISEMENT
This page was tagged for
Welcome Back hindi movie
Welcome Back reviews
release date
John Abraham, Anil Kapoor
theatres list
Follow @fullhyderabad
Follow fullhyd.com on
About Hyderabad
The Hyderabad Community
Improve fullhyd.com
More
Our Other Local Guides
Our other sites
© Copyright 1999-2009 LRR Technologies (Hyderabad), Pvt Ltd. All rights reserved. fullhyd, fullhyderabad, Welcome To The Neighbourhood are trademarks of LRR Technologies (Hyderabad) Pvt Ltd. The textual, graphic, audio and audiovisual material in this site is protected by copyright law. You may not copy, distribute, or use this material except as necessary for your personal, non-commercial use. Any trademarks are the properties of their respective owners. More on Hyderabad, India. Jobs in Hyderabad.