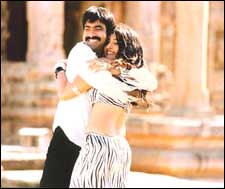 EDITOR RATING
7.0
Performances
Script
Music/Soundtrack
Visuals
NA
NA
NA
NA
Suggestions
Can watch again
NA
Good for kids
NA
Good for dates
NA
Wait for OTT
NA
It always sad when you have to think of what might have been.

Vikramarkudu is like one of those dishes that smell great during cooking, but just don’t taste the same way in the end. The film assiduously builds its story to a crest with your adrenaline pumping on all cylinders, but doesn’t quite know how to handle it thereon. There are some errors of creativity and some of strategy this point on, and the film loses a few more crores that it might have grossed at the BO, and one more star in its rating.

The movie begins quite entertainingly, showcasing the escapades of Ravi Teja and Brahmanandam, a couple of small-time thieves who even steal food from the neighbour's leaf at a marriage when they are being served the same thing anyway. Among the things they've stolen are a post box from outside a post-office, a coin-operated pay-phone, a boring pump, a whole Tata Indicom calling booth (that they use as a loo) and some film hoardings. Even the idol of God they pray for forgiveness to is stolen from a temple.

Into this idyllic and self-reliant world of theirs, enters a kid who claims to be the daughter of Sattibabu (Ravi Teja), and who weaves herself into his world despite all the clauses he shows her about his innocence. Sattibabu loses his girl Neeraja (Anushka) due to this, and even chum Brahmanandam starts suspecting him. It soon turns out, however, that she is not his kid but that of a look-alike of his, Vikram Rathore (Ravi Teja), an IPS officer.

The second half has the flashback – and, while most of us wince at the thought of a flashback, this one has you actually looking forward to it, because of the way Vikram's colleagues introduce him. And sure enough, the flashback, aside of the comic first half hour, is the best part of the film.

Vikram is a fearless officer posted in Chambal valley's Devgarh, and takes on the gang of Bavji, who rules the area ruthlessly, including its police. The opening scene introducing Bavji, where Rajiv Kanakala, a police inspector, goes to him to tell him that his (Kanakala's) wife is missing, is one of the most poignant ever. You have to see it, it's unfair to talk about it.

Raja Mouli's big strength, displayed in Chatrapati and now in Vikramarkudu, is the characterization of the villian. The loathing you are filled with is so intense, you want him and his henchmen hurt in extreme gore, brutally mutilated. The big scene of Vikramarkudu is the next one, where Vikram goes to Bavji's mansion to rescue Kanakala's wife.

The flashback ends with Vikram being taken for dead but being shifted to Hyderabad by his co-officers for treatment, and, like we said, is easily the best part of the film. Vikram is killed in Hyderabad by Bavji's men who come searching for him, however, and Sattibabu decides to don the role of Vikram – something a la Don – and go back to Devgarh.

The undoing of Vikramarkudu happens in this last half hour – Mouli now simply doesn't know how to go ahead, and trivializes the crescendo built. The imperial Bavji is made to suddenly look like a nincompoop, and seems to go down too easily. There are many poorly conceived sequences – like the one in the village square where Sattibabu tries to make the village revolt without proper planning, and another where the home minister does not come to the aid of Bavji who he has been protecting all this while, for no reason at all – and the climax fight is a big letdown for the kind of gravity of the situation that Mouli builds.

What you have then, is a film that entertains in half of the first half and rouses in half of the second, and is scuppered in the rest. It still might make it at the turnstiles, though, since whatever works, works well.

Ravi Teja excels in both roles. He is improving with each film, and in all aspects. Anushka has pretty little to do. Brahmanandam thoroughly entertains, while it’s hard to see what Prakash Raj is doing in almost a walkon part. The songs are pretty good, with some of them already being hits.

Vikramarkudu is capable of entertaining you, if you can pardon the last half-hour or so. It does appear like Raja Mouli has a 5th consecutive another hit.
Share. Save. Connect.
Tweet
VIKRAMARKUDU SNAPSHOT

RATING
4
AFZAL AHMED on 26th Oct 2006, 11:10am | Permalink
liked the item bombs anushka and meghana naidu.... they are HOOOOOOOOOOOTTTT
RATING
8
Rahul Kavuri on 9th Oct 2006, 5:15pm | Permalink
hi, Ravi Teja just takes on the whole film, but the last half an hour as the reviewer said should have been handled more seriously otherwise it would have been a big big hit...
RATING
6
Vaas on 9th Aug 2006, 4:34pm | Permalink
Anushka nadumu baagundi.
RATING
10
Sikandar on 3rd Aug 2006, 12:42am | Permalink
Gud one as per youth is concerned
RATING
6
Zeus on 17th Jul 2006, 5:54pm | Permalink
A stupid movie with the most insensible direction, but made to look entertaining just becos of Ravi Teja's presence all over. And Saradhi's right!!
RATING
6
Idiot Atthili Satthi on 14th Jul 2006, 1:27am | Permalink
gud movie...humourous comedy..xcellent fights...nice performance frm raviteja...

why dont u ppl direct a film and show some light to mouli.

ADVERTISEMENT
This page was tagged for
vikramarkudu movie review
vikramaarkudu full telugu movie
vikramarkudu
Vikramarkudu telugu movie
Vikramarkudu reviews
Follow @fullhyderabad
Follow fullhyd.com on
About Hyderabad
The Hyderabad Community
Improve fullhyd.com
More
Our Other Local Guides
Our other sites
© Copyright 1999-2009 LRR Technologies (Hyderabad), Pvt Ltd. All rights reserved. fullhyd, fullhyderabad, Welcome To The Neighbourhood are trademarks of LRR Technologies (Hyderabad) Pvt Ltd. The textual, graphic, audio and audiovisual material in this site is protected by copyright law. You may not copy, distribute, or use this material except as necessary for your personal, non-commercial use. Any trademarks are the properties of their respective owners. More on Hyderabad, India. Jobs in Hyderabad.