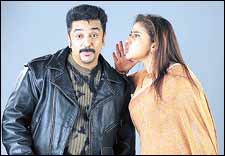 Preetam Akkineni / fullhyd.com
EDITOR RATING
6.0
Performances
Script
Music/Soundtrack
Visuals
NA
NA
NA
NA
Suggestions
Can watch again
NA
Good for kids
NA
Good for dates
NA
Wait to rent it
NA
In 1981, Kamal Hassan and director Singeetham Srinivas made their first movie together. Amavasya Chandrudu (Raja Paarvai in Tamil) was a box office disaster, because apparently the movie was “too modern, too path-breaking for the audience of that time”.

In 1988, they broke new ground again with Pushpaka Vimanam. Everyone gasped at the intelligence of the movie, that had not a word spoken.

The duo then consistently raised the bar with storylines never heard of before in South-Indian Cinema. Apoorva Sahodarulu, Micheal Madana Kama Raju and Aadavaallaku Maatram were all collaborations. Singeetham on his own created a niche in Telugu Cinema with movies like “Aditya 369” and “Bhairava Dweepam”.

Their latest collaboration is a very inventive comedy that again explores new territory. The celebrated art of slapstick comedy returns to the Telugu screen with Mumbai Xpress. The hyper-paced first half is so full of gags that we were ready to hail this as an instant classic. But as recently has been expected from Kamal Hassan, he wanders off a trifle too much in the second half.

The story of a kidnapping gone stupid has space for a lot of confusion and ineptitude. Kamal plays the character of Avinash alias ‘Mumbai Express’, a daredevil deaf motorbike rider who drives around in deep wells and other difficult spots. He then joins a bumbling gang of idiots for the heist.

Avinash politely blends into the gang, while Pasupathy takes centrestage with all the great lines and gags. Manisha’s love story is unconvincing and underdeveloped. She is the kidnapped kid’s father’s mistress. The father is Police Inspector Nasser. Our hearts skipped a beat each in anticipation of the possible confusion.

This is where Singeetham and Kamal go wrong. There is too much confusion and too little comedy, and that kills all the momentum. Kamal clearly missed Crazy Raja who wrote the dialogues for such slobberknockers like Panchatantra, Tenali and Brahmachari. Those rhythmic exchanges are clearly missing.

The comedy has clearly been stolen by Pasupathy and the cronies. The scenes with them on the phone negotiating the ransom are hilarious, and will make your day right there.

The stunts, in spite of being a treat to watch, are a crazy risk, especially since Kamal shot them himself. Watch out for the Vande Mataram song which the children sing while Kamal dangles holding on for dear life. Adding effect into that one is the superb composition by Illayaraja.

The songs are completely in the zone with the present generation. They also had Jazz influence that grows on us, but audiences expecting the Illayaraja of yore will miss him. The background music is classic Illayaraja and a definite hit even outside the movie.

With so many things going for it, it breaks our heart to say that the movie seems unsatisfactory for a combination of such calibre.

This is supposedly completely shot on Digital Video. This apparently saved the producers (Rajkamal Films International) ten crore rupees. This could’ve been invested in writing a tighter story making this a movie for all times. But the movie is pretty close.
Share. Save. Connect.
Tweet
MUMBAI XPRESS SNAPSHOT

ADVERTISEMENT
This page was tagged for
Mumbai Xpress telugu movie
Mumbai Xpress reviews
release date
Kamal Hassan, Manisha Koirala
theatres list
Follow @fullhyderabad
Follow fullhyd.com on
About Hyderabad
The Hyderabad Community
Improve fullhyd.com
More
Our Other Local Guides
Our other sites
© Copyright 1999-2009 LRR Technologies (Hyderabad), Pvt Ltd. All rights reserved. fullhyd, fullhyderabad, Welcome To The Neighbourhood are trademarks of LRR Technologies (Hyderabad) Pvt Ltd. The textual, graphic, audio and audiovisual material in this site is protected by copyright law. You may not copy, distribute, or use this material except as necessary for your personal, non-commercial use. Any trademarks are the properties of their respective owners. More on Hyderabad, India. Jobs in Hyderabad.