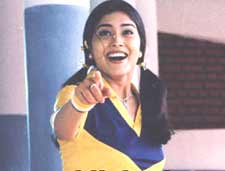 Three stars is the basic rating for Nuvve Nuvve. However, you should add half a star to that rating if you're an adult and thus able to appreciate its wittier (and novel) verbal repartees, another half a star if you're a soon-to-be idealistic lover, and half a star again if you're a fan of Tarun/Shreya. That more or less makes it a four-star movie, which will perhaps explain the movie's victorious opening.

In essence, Nuvve Nuvve is the story of a sweet bunny-hugger called Anjali (Shreya), who is torn between the convictions of her sensible, caring father (Prakash Raj) and those of her lover boy Rishi (Tarun). The film begins on a comic note, but increasingly becomes a serious battle of words. It ends up the same way as any other movie written by Trivikram - Anjali is forced to marry the guy of her father's choice but ends up marrying the choice of her own. 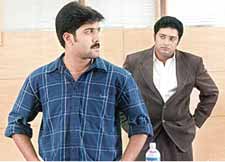 The acting is enjoyable, headed by Tarun and Prakash Raj. But the major problem I have with Tarun in this film is that he pretty much relies on a particular facial expression for the whole film. That pouty "don't mess with me" look remains constant throughout his performance of a character which is actually quite complex and is undergoing tremendous emotional shifts all through the story. There's no passion and no desire - not that the desire is a requirement for such a character, but just that he seems to be making the same damn face the whole movie. Nevertheless, in the light of latest (raucous) Telugu movies (bar Show), one can safely say that all of the performances are first-rate. 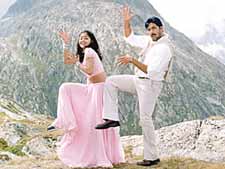 Koti makes a respectable comeback with an attractive mishmash of both plagiarized and creative tunes. The premise of the music, as in all other Koti compilations, appears to be that 'there is something in it for everyone' - good thing or bad, you decide. The title song, "Nuvve Nuvve", inevitably reminisces one of the last track of Nuvve Kaavali, and "Kallaloki Kallu Petti Choodavenduku" and "I Am Very Sorry" of two very famous numbers in Hindi and English. That aside, the music is quite imposing and situational.

Of late Tollywood offerings have accustomed audiences to a zippy, amped-up rhythm - that is not just dialogue but the guerrilla style of stand-up dialogue, where you hit a scene hard and fast then move on to the next one. Precisely, this is where the director Trivikram steers clearly away from the crowd. 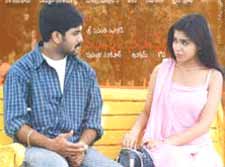 Nuvve Nuvve, more often than not, dawdles. It's terribly talky - not the one-liners but the kind of well-rounded speeches that'll have young kids kicking their chairs in frustration. There's a fussy, adult feel to the movie (ahem!), which is reflected in its rather mature dialogue. Nonetheless, there is not one uninspiring scene in the whole movie, thanks to its novel treatment and well-executed dialogues.

The film is definitely worth watching, thanks to its tight script, decent music, decent performances, novel treatment and brilliantly written dialogues.
Share. Save. Connect.
Tweet
NUVVE... NUVVE SNAPSHOT
See Nuvve... Nuvve full details
NUVVE... NUVVE USER REVIEWS
1 - 10 OF 10 COMMENTS
POSITIVE  |  NEGATIVE |  NEWEST  |  OLDEST  |  MOST HELPFUL  |  LEAST HELPFUL
USER RATING
7.1
68 USERS
Performances
Script
Music/Soundtrack
Visuals
NA
NA
NA
NA
Can watch again - NA
Good for kids - NA
Good for dates - NA
Wait to rent it - NA
karthik86 on 21st Jan 2003, 8:22pm | Permalink
Nice movie - Prakash Raj's action is awesome and Sunil is brilliant.
RATING
8
Mohana Rao Karella on 25th Nov 2002, 11:28am | Permalink
This movie is worth watching for your money and time.
RATING
8
Mungalla Krishna on 10th Nov 2002, 6:48pm | Permalink
I have not watched the movie yet. But I saw the clippings of this film in Gemini TV. Tarun is the best actor - he worked well in this film. But my suggestion to you Tarun is that you must do all types of characters - don't create a loverboy image characters by doing only those. Try to do all characters which will enhance your image and make you to stand long in the industry. Your action and performance in the film Nuvve-Nuvve are quite good, keep it up.
RATING
8
Ajay Jr on 25th Oct 2002, 2:51am | Permalink
It's okey dokey movie. Shriya is cute, worth watchin' 4 her... :)
RATING
6
Vasu on 15th Oct 2002, 3:34am | Permalink
the dialogues of the movie are good, and so is the direction. yet something lacks in the movie.
RATING
2
Dev on 14th Oct 2002, 2:53am | Permalink
The Best Movie of the year so far.
RATING
10
Dev on 13th Oct 2002, 2:23am | Permalink
Anybody got Shreya's email or phone number?
RATING
10
The Editor on 12th Oct 2002, 10:58am | Permalink
Perhaps you should read the analysis for Jenda.
RATING
6
Lal Bahadur on 12th Oct 2002, 1:32am | Permalink
Are there any standards for u guys for a reviewers rating. How on earth can you club both Nuvve... Nuvve and Jenda with a 3* rating. Either you guys have lost your brains or might be a bug in programming.
RATING
8
Vegmanjuria on 11th Oct 2002, 9:36pm | Permalink
fullhyd shld celebrate - its first three star rating in ages....and for giving readers the recommendation that its watchable...uuuu hoooo
RATING
8
LEAVE A COMMENT
fullhyd.com has 700,000+ monthly visits. Tell Hyderabad what you feel about Nuvve... Nuvve!
MORE MOVIES
Latest Reviews
SR Kalyana Mandapam
Ippudu Kaaka Inkeppudu
Thimmarusu
Kadhanika
Shukra
more
Deyyam - 2021
Tempt Raja
Vakeel Saab
Wild Dog
Sulthan (Telugu)
Sulthan
Rang De (Telugu)
Saina
Aranya
Chaavu Kaburu Challaga
Contemporary Reviews
Hanuman
Chetna
Sultan
Mumbai Xpress
Sakhiya
more
786 Khaidi Prema Katha
Ocean's Twelve
Goodhachari No 1
Rain Coat
The Incredibles (Hindi)
Pokiri
Konchem Touchlo Unte Cheputh...
Swaraabhishekam
Apparao Driving School
Random Reviews
Devatha
Jai Betaala (Telugu)
Die Another Day
Ramana
Bangaram
more
The Proposal
Gayam 2
Dookudu
Resident Evil: Retribution (...
The Lunchbox
Maaya
Phantom (Hindi)
Katamarayudu
Goodachari
Jaanu
SEARCH MOVIES
Dissatisfied with the results? Report a problem or error, or add a listing.
ADVERTISEMENT
SHOUTBOX!
{{todo.name}}
{{todo.date}}
[
ip{{todo.ip}}
]
{{ todo.summary }}... expand »
{{ todo.text }} « collapse
First  |  Prev  |   1   2  3  {{current_page-1}}  {{current_page}}  {{current_page+1}}  {{last_page-2}}  {{last_page-1}}  {{last_page}}   |  Next  |  Last
{{todos[0].name}}

ADVERTISEMENT
This page was tagged for
Nuvve Nuvve
Nuvve Nuvve Telugu movie Tarun
Tarun movie Telugu Nuvve Nuvve
nuvve nuvve full movie hindi dubbed
talugu local film the adult
Follow @fullhyderabad
Follow fullhyd.com on
About Hyderabad
The Hyderabad Community
Improve fullhyd.com
More
Our Other Local Guides
Our other sites
© Copyright 1999-2009 LRR Technologies (Hyderabad), Pvt Ltd. All rights reserved. fullhyd, fullhyderabad, Welcome To The Neighbourhood are trademarks of LRR Technologies (Hyderabad) Pvt Ltd. The textual, graphic, audio and audiovisual material in this site is protected by copyright law. You may not copy, distribute, or use this material except as necessary for your personal, non-commercial use. Any trademarks are the properties of their respective owners. More on Hyderabad, India. Jobs in Hyderabad.