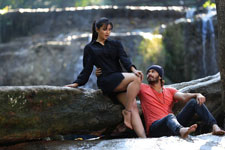 Spandana P / fullhyd.com
EDITOR RATING
3.0
Performances
Script
Music/Soundtrack
Visuals
6.0
2.0
6.5
7.5
Suggestions
Can watch again
No
Good for kids
No
Good for dates
No
Wait to rent it
Yes
Rogue is a vicious attack on your senses. The film, which to start with takes off on a barely average note, continuously further plummets thereafter. Yes, we are very much aware that Puri barely represents his leading men as a chivalrous, well-bred sort. He likes them as Idiots, Pokiris, Desamudurus and Loafers better. And while that has almost always worked for him, it is because they had with them the backing of strong scripts.

With Rogue, however, he completely abandons everything taught in Filmmaking 101 and totally relies on the variety of degrees of psychosis that he writes for his characters. Nutcases and loonies appear under the charades of the hero, heroines, villains and beggars in this crankfest that makes you badly want to format your head by the time it is over.

So Chanti (Ishan) and Anjali (Angela Krislinzki) are professing undying love for each other in an exotic location in some deep wilderness. One song later, she frantically tells him that she is being forced to marry someone of her family's choice. Head-over-heels in love with her, Chanti creates a ruckus at her engagement and beats up some 50 odd policemen in the process.

Obviously he is jailed for all of this. He later gets to know that the girl got hitched willingly - she herself tells him that, with an explanation that is as lame as anything ever got. This gives our hero and our director the moral highground from where they can hurl profanities and display abhorrence towards woman in general. Female-bashing is the focus of about three-fourths of this film. (And for some reason almost all the women who appear on screen are named Anjali - you can't help thinking that perhaps there's a real Anjali somewhere.)

Out of jail, Jay discovers that one of the constables he had thrashed at Anjali's engagement has been strapped to a wheelchair since, due to which his family has spiralled into a financial crisis. He now does not want anybody to rest until he has solved all their problems. Enter Anjali 2 (Mannara Chopra), who is the constable's sister. She sets the ground for the entry of Psycho Villain (Anoop Singh), who is officially bestowed psycho-hood by the script (though the others are not far behind). She is his target for some reason in the past that you are by now pretty indifferent to. How all of them actively contribute to all the dysfunctional situations that come about comprises the, um, plot.

Ishaan would have been better off playing a jilted-lover-turned-alcoholic rather than a rogue. His flawless complexion paired with his droopy eyes evokes nothing rogue-ish about them. It's not convincing seeing him driving a toto sending guys flying in all directions and donning a lungi on some occasions.

Angela Krislinzki's isn't a mainstream character, except that she has a song with the hero. Mannara Chopra gives a decent performance. Ali, in a rehash of his infuriating beggar act from Pokiri, is not impressive. Anoop Singh however fits his character perfectly.

The songs of Rogue are tolerable, and the cinematography is good. The background score is fine, too, except when it gets into that Sanskrit-hymn mode every time the villain appears. The action sequences have the usual gravity-defying stunts, but are passable.

Recommend this film to others only if someone has recommended it to you - that's still more moral than plenty of premises in this one.
Share. Save. Connect.
Tweet
ROGUE SNAPSHOT 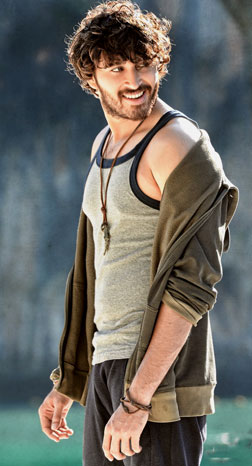 ADVERTISEMENT
This page was tagged for
rogue telugu movie
Rogue telugu movie
Rogue reviews
release date
Ishaan, Mannara Chopra
Follow @fullhyderabad
Follow fullhyd.com on
About Hyderabad
The Hyderabad Community
Improve fullhyd.com
More
Our Other Local Guides
Our other sites
© Copyright 1999-2009 LRR Technologies (Hyderabad), Pvt Ltd. All rights reserved. fullhyd, fullhyderabad, Welcome To The Neighbourhood are trademarks of LRR Technologies (Hyderabad) Pvt Ltd. The textual, graphic, audio and audiovisual material in this site is protected by copyright law. You may not copy, distribute, or use this material except as necessary for your personal, non-commercial use. Any trademarks are the properties of their respective owners. More on Hyderabad, India. Jobs in Hyderabad.