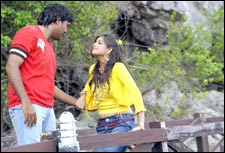 Deepa Garimella / fullhyd.com
EDITOR RATING
6.0
Performances
Script
Music/Soundtrack
Visuals
6.0
7.5
6.5
6.0
Suggestions
Can watch again
No
Good for kids
No
Good for dates
Yes
Wait to rent it
Yes
Cribbing about Aa Okkadu would be like turning down a brilliant interview candidate just because you don't like the colour of his shirt - not only is it rude, it is also stupid on your part because you're going to take ages to dig out another one with his brains. Rarely on our local screens do we get to see a display of intelligence that lasts for more than a sum total of 3 minutes, and when you get an entire movie packaged with the stuff, you really should overlook the lack of 'zing' as we conventionally know it - over-rated stars, gut-scraping dialogue, group butchery, female inanity, and all those things they call 'playing to the masses.'

Pavitra (Madhurima) is the daughter of a retired judge (Vijay Chander), and is fighting a custody case over her dead sister's child - the husband is errant and crooked. A feisty criminal psychiatrist, Pavitra has to suddenly contend with the murder of her brother-in-law - especially since all evidence points to her.

The story is essentially the interplay of dynamics among five pivotal points - Pavitra and her family, an over-deified godman, a criminal lawyer Sri Krishna (Suresh Gopi), a mild neurotic, and a private detective Bujji (Ajay) who works for Sri Krishna. Nasser plays the cop who helps Pavitra solve the multi-faceted case.

Aa Okkadu is for those who don't mind carrying their brains to a movie. It's a well thought-out script, things do add up in the end, and surprise surprise - there's barely any gore (just 2 scenes of stabbing). There's a really sad comedy track involving a mental hospital, and another equally ineffective one involving Sunil as Pavitra's protective stalker, but that's about the only extra flab the film has. Indeed, the only weakness Aa Okkadu has is in its promotion - why would someone come to watch it unless there was a strong reason to, like finding the rest of the multiplex screens full?

The strength of the film is not in the choice of the killer, but in how the jigsaw is pieced together. Unlike thriller novels, movies of the genre don't have the luxury of setting up multiple conundrums leading up to the climax, and solving them - hence earning the enhanced scope of executing those few sequences well. Aa Okkade realizes this. The bit where Pavitra is led out of the house by an intruder who plays around with her car, followed by her calling the police, is an example - Pavitra's role in that scene didn't compromise on even nuances like her panting and buying a soft-drink from the shop where she made that call from.

Though the film is not filled with heavy-duty emotions, there are a couple of impressive touches. There's this scene in which Sri Krishna is being fervently beseeched by the woman who wants him to fight her son's case, and Sri Krishna's wife makes a measured plea to make him agree - which speaks of some poignant writing.

Ajay is slightly deadpan, but then, this is not really his movie. It's the heroine who has the most to do, and she's very good. Among the rest of the cast, it is only Nasser who's the most skillful.

Aa Okkadu is allright in its technical values - it's just the look that's slightly jaded. As for the music, there are a couple of good strokes - a lilting devotional on Lord Krishna in the beginning, and another semi-classical number at the end.

Aa Okkadu looks like that unlikely surprise lurking in the back of your cupboard, and maybe the one you've secretly wished for. And like we said, do take your brains along.
Share. Save. Connect.
Tweet
AA OKKADU SNAPSHOT


Pros: performance of heroine
Cons: made a hash of a good borrowed script

ADVERTISEMENT
This page was tagged for
aa okkadu movie review
Aa Okkadu telugu movie
Aa Okkadu reviews
release date
Ajay, Madhurima
Follow @fullhyderabad
Follow fullhyd.com on
About Hyderabad
The Hyderabad Community
Improve fullhyd.com
More
Our Other Local Guides
Our other sites
© Copyright 1999-2009 LRR Technologies (Hyderabad), Pvt Ltd. All rights reserved. fullhyd, fullhyderabad, Welcome To The Neighbourhood are trademarks of LRR Technologies (Hyderabad) Pvt Ltd. The textual, graphic, audio and audiovisual material in this site is protected by copyright law. You may not copy, distribute, or use this material except as necessary for your personal, non-commercial use. Any trademarks are the properties of their respective owners. More on Hyderabad, India. Jobs in Hyderabad.