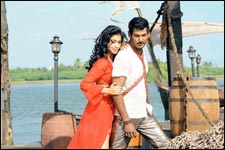 Deepa Garimella / fullhyd.com
EDITOR RATING
4.0
Performances
Script
Music/Soundtrack
Visuals
7.0
3.5
6.0
8.0
Suggestions
Can watch again
No
Good for kids
No
Good for dates
No
Wait to rent it
Yes
When Krishna's brother, Rambabu, is barely 10, he bunks school to get the name of his girl tattooed on his chest, unaware of the dangers that befall kids with such over-eager hormones. His enraged mother (Geeta) tries to erase the tattoo - with a burning piece of wood, of course - following which Rambabu runs away from home.

A decade later, the widowed mother is unable to cope with the loss, and keeps worrying about where he is, what he's doing, what he's eating, and which brand of hair-oil he's using, hoping she'll at least die that way - since these are the questions her husband worried about and died.

After hearing the sorry tale, Krishna (Vishal) sets off to Vizag, where Rambabu was last supposed to have been spotted. Now as Pistha will show you, Vizag is a deadly place with drugs, gangsters, shoot-outs and blackmail in crowded marketplaces - you're much safer getting lost at midnight in Bihar's hinterlands. Krishna is unwittingly caught between 2 rival gangs belonging to Guru & Suryaprakash (Prakash Raj).

In a romantic track that's about as fresh as your closest mortuary, Krishna lands a random air-head Indu (Shriya Saran). He is smitten by her and keeps referring to her as 'figure' whenever he talks about her to others. She, however, keeps referring to the figure on her paycheque whenever she has to share screen space with him.

After a false alarm, Krishna discovers that Guru is his brother, when he accidentally sees the half-burnt tattoo on his chest before stabbing him. This goes on to show that tattoos serve a dual purpose - they come in useful when you need to run away from home young, and also when you're keen on being found later on.

Guru, though, isn't that keen on the latter. Krishna tells him to ditch his weapons and come back home. But Surya Prakash is creating havoc now. Plus, new characters - a minister (Sayaji Shinde) and a cop - are being brought in at this point in the script. Unfortunately, no one can salvage a story that's starting to make a documentary on pig-fur seem like The Adventures Of Mr. Bean.

Pistha is a formula film whose title has nothing to do with the film except land up in a couple of dialogues referring to Krishna's bravado. It's a bilingual and a lot of effort has gone in to make it appeal to Telugu audiences - Telugu lip-sync (by even the Tamil actors), known faces, sign-boards and locational references (they must have decided on Vizag because of what it has in common with Chennai - the beach), and humour. The first half does have comedy, from Ali, M S and other comedians, as well as from the romance.

However, except for Shriya, it isn't anything you'd take the trouble of going to a theatre for. There's too much of thwacking with plus-sized rods, too many close-ups of people belching blood, a sorry-looking romance, and barely a couple of good songs. And quite a bit of 'Tamilified' Telugu.

Vishal is enthusiastic but completely overdoes the acting job, which ends up looking more affected than energetic. As for screen presence, he's hopelessly inadequate in front of his leading lady. Shriya's role was mainly to jazz up the film, which is just as well - during the songs we doubt if anyone notices there's even a hero beside her. By the way, there's no extra oomph as hyped - she's just herself and wears whatever most heroines do. And as for the lip-lock, it's hardly one. The rest of the actors are seasoned, and mostly get to mouth mass dialogues.

Surely no one will fault Pistha for its budget. Slick camera work, lavish locales for the songs, and copious amounts of ketchup mark the film. Manisharma gives us his usual techno-drugged music, but 'O Ammadu' is an interesting song, which is also well-choreographed.

Pistha's promos must have cost enough to feed 6 lakh Somalian kids for a month, and going by how the film is, maybe the kids lost their chance after all.
Share. Save. Connect.
Tweet
PISTHA SNAPSHOT

ADVERTISEMENT
This page was tagged for
Pistha telugu movie
Pistha reviews
release date
Vishal, Shriya
theatres list
Follow @fullhyderabad
Follow fullhyd.com on
About Hyderabad
The Hyderabad Community
Improve fullhyd.com
More
Our Other Local Guides
Our other sites
© Copyright 1999-2009 LRR Technologies (Hyderabad), Pvt Ltd. All rights reserved. fullhyd, fullhyderabad, Welcome To The Neighbourhood are trademarks of LRR Technologies (Hyderabad) Pvt Ltd. The textual, graphic, audio and audiovisual material in this site is protected by copyright law. You may not copy, distribute, or use this material except as necessary for your personal, non-commercial use. Any trademarks are the properties of their respective owners. More on Hyderabad, India. Jobs in Hyderabad.