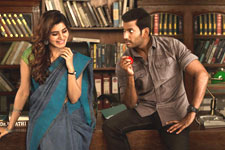 Kritika Deval / fullhyd.com
EDITOR RATING
5.5
Performances
Script
Music/Soundtrack
Visuals
5.5
4.5
5.0
6.0
Suggestions
Can watch again
No
Good for kids
No
Good for dates
No
Wait for OTT
Yes
According to Arthur C Clarke's third law, any sufficiently advanced technology is indistinguishable from magic. We'd like to add a corollary to this that only applies to south-Indian cinema - any and all technology is in fact magic, and therefore can be used as a plot device that does not need explanation. The "magic" in question is cybercrime, and the plot, beyond all the drama and villainy and chest-thumping, is that of the Angry Young Man vs Aadhaar.

Vishal plays Karunakar, a military major with anger management issues who seemingly sees his psychiatrist (Samantha) mostly to flirt with her. He is angry about corruption and inequity and ignorance and any number of social evils that beset our nation. He has a complicated relationship with his father who regularly falls prey to every predatory loan shark in his vicinity. Circumstances lead to Karunakar having to do as his father does and take a shady loan, but the money credited to his account vanishes almost immediately. Now, he is left with no money and a lot of debt that his lenders are increasingly insistent on collecting.

Angry Young Man that he is, Karunakar immediately jumps into solving the mystery of where the money went, and traces a web of smaller evils to a great morass of corruption, at the centre of which is "Master Hacker" Sathyamurthy (Arjun Sarja). You can guess at what happens next, and you'd most likely be right. No one ever accused our filmmakers of being too unpredictable.

None of this happens as quickly as this plot description above implies. The first half takes forever and is mostly backstory and "comedy" and family feels that leave you decidedly unfeeling. The only thing keeping you interested is all the background skulduggery and shady dealings and "magic" pretending to be science as people sort of swipe other people's pockets with their phones to get their hands on personal information. The shadow of evil doings is omnipresent, and is well aided by a background score that skillfully ups the tension in the room. The second half is neatly done with a cat and mouse chase between Karunakar and Sathyamurthy where the two often switch places.

Vishal has a good presence, and it is matched by that of Arjun Sarja. Both of them, however, are slightly crippled by a wishy-washy script that doesn't seem to know what it wants from them. Samantha is sassy and lovely and wears fantastic sarees that we want, but is generally mostly there. The scenes with her and Vishal make you wish this was a different movie, because they do look nice together and a romcom with the two would be fun.

Arjun Sarja switches between over-the-top megalomaniac to Illuminati-esque shadowy puppet master. His general demeanour is often the only thing keeping his character from being too ridiculous amidst the grandstanding and the improbable jargon.

The production is rather slick, with smooth editing and competent cinematography and a well-executed background score coming together to make the whole thing watchable. The dialogue is nicely written, which is something of a relief since films dubbed from Tamil often have dialogue that makes you weep for the Telugu language. The few songs in the movie are a good way to take a break from an often tiresome plot.

The thing is, the south-Indian films watched by this writer in the past few weeks have been this, this, and this. Abhimanyudu in comparison is like applying baby lotion to sunburnt skin. It won't stand up to the scrutiny of a second viewing, but you can watch it once, if for nothing other than to have fun obsessively picking apart plot holes.
Share. Save. Connect.
Tweet
ABHIMANYUDU SNAPSHOT 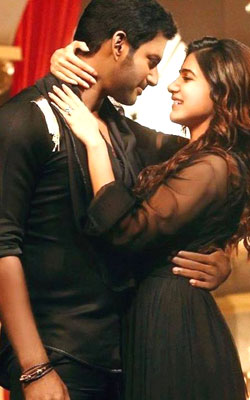 ADVERTISEMENT
This page was tagged for
Abhimanyudu telugu movie
Abhimanyudu reviews
release date
Vishal Krishna Reddy, Samantha Akkineni
theatres list
Follow @fullhyderabad
Follow fullhyd.com on
About Hyderabad
The Hyderabad Community
Improve fullhyd.com
More
Our Other Local Guides
Our other sites
© Copyright 1999-2009 LRR Technologies (Hyderabad), Pvt Ltd. All rights reserved. fullhyd, fullhyderabad, Welcome To The Neighbourhood are trademarks of LRR Technologies (Hyderabad) Pvt Ltd. The textual, graphic, audio and audiovisual material in this site is protected by copyright law. You may not copy, distribute, or use this material except as necessary for your personal, non-commercial use. Any trademarks are the properties of their respective owners. More on Hyderabad, India. Jobs in Hyderabad.