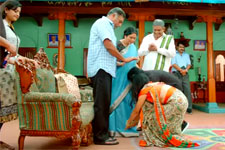 Ajay Kumar R / fullhyd.com
EDITOR RATING
6.5
Performances
Script
Music/Soundtrack
Visuals
8.0
7.0
6.0
7.0
Suggestions
Can watch again
Yes
Good for kids
No
Good for dates
No
Wait for OTT
No
Recent Telugu movies of the rom-com drama genre have stood out for their sexism, misogyny, and long lectures on family and love (Nanna Nenu Naa Boyfriends being an example). Director Satish Vegesna's Satamanam Bhavati thankfully takes a welcome detour from the bigotry and wafer-thin plots its peers offer. It is still a long lecture on family values and love, but it's more tolerable (harrowing speeches in Telugu romcoms apparently are not something you can escape from).

So a stern and laconic Raghavaraju (Prakash Raj) and his compassionate and loyal wife Janakamma (Jayasudha) - the elders of a small village - are living the life of an ideal couple. Or at least that is what they project to their children, grandchildren, and the rest of the village. For, while Raghavaraju strives to solve every problem the villagers face in their married lives, his own marriage is in trouble for unknown reasons as the couple no longer connect.

The couple have three children who are based abroad and barely have time for their parents. But when they sense trouble in paradise, the children, along with their own families, head home to visit Raghavaraju and Janakamma. Only, they have no clue on how to resolve a breaking marriage. So it is now upon the elderly couple's intelligent and sensible grandson Raju (Sharwanand) to discover the root of the problem and a way to patch the crumbling relationship which is on the verge of a divorce. And he needs to do all this while managing his own love life with his uncle's daughter Nitya (Anupama Parameswaran).

Satamanam Bhavati ponders on a very current issue - degrading family values and social interactions in an increasingly digital era. The lead couple's children and grandchildren are based abroad and do not find time for them and their problems, and that starts affecting their parents' relationship as Janakamma constantly speaks of her children's memories and ends up irking and grieving Raghavaraju. The issue gets so deep that they have nothing else to talk over, creating a widening and gap between them which seems to be hitting the point of no return.

But just when you think that Satamanam Bhavati is going to mirror a Baghban and vilify the couple's children for being busy with their own lives, it pleasantly showcases the issue as merely a communication gap with a simple resolution. Another good point about the film is the scripting of Nitya - she is born and brought up abroad and knows little of the ways and traditions of south India, but the movie doesn't shame being Western, showing the villagers as quite inclusive. In fact the movie doesn't dwell upon the subject at all. This is a welcome diversion from several Indian films in the recent past that have belittled the "Western culture".

However, the drama starts to get trite and the dialogues lose flavour towards the last quarter of the movie. But the film compensates for its deficiencies with hilarious comedy and an impactful cast.

Sharwanand and Anupama emote brilliantly, and are refreshing and ebullient. Prakash Raj is excellent, of course - he carries the entire movie on his shoulders. While Anupama's and Sharwanand's acting coupled with decent direction are the foundations of this film, Prakash Raj makes it enjoyable and, also gives the audiences something to ponder over.

Sameer Reddy's rendering of the visuals for the countryside, the lake under starlight and several other scenes are captivating to say the least. And Mickey J Meyer's music and soundtrack are upbeat and enthralling.

While Satamanam Bhavati will appeal only to a segment of moviegoers, it deserves appreciation for taking a rather dated concept and presenting it in a refreshing and relatable format.
Share. Save. Connect.
Tweet
SHATAMANAM BHAVATI SNAPSHOT 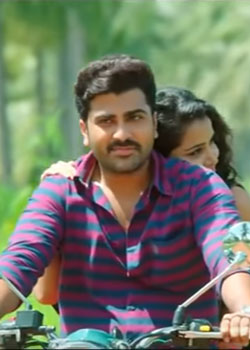 See Shatamanam Bhavati full details
SHATAMANAM BHAVATI USER REVIEWS
1 - 1 OF 1 COMMENTS
POSITIVE  |  NEGATIVE |  NEWEST  |  OLDEST  |  MOST HELPFUL  |  LEAST HELPFUL
JayZ on 14th Jan 2017, 8:49pm | Permalink
Why is it that English and Hindi films tell us a story while Telugu films teach us a lesson?
Ajay on 15th Jan 2017, 9:47am | Permalink
That's probably because the two Telugu states (and most of the culturally uptight States in India) share monochromatic view on values. Too few directors adopt a different frame of reference. This leads to the feeling that their views are being imposed on us (the narrator of this film literally tells you "do this, do that, oh but not that".
But a lot of the forty and fifty plus audience might enjoy this movie.
Josh on 15th Jan 2017, 10:35am | Permalink
Welcome to the comments section, Ajay :)
Kanye on 15th Jan 2017, 12:08am | Permalink
I don't think there's anything wrong with that. We are also the most culturally attached, we don't see an awful lot of that in Bollywood.
JayZ on 15th Jan 2017, 8:13am | Permalink
It was not a statement...it's an observation....and I just wanna know why. ..maybe Josh can join in....
Josh on 15th Jan 2017, 8:56am | Permalink
I can't get the context here. I haven't watched the film. But I feel preaching is not limited to Telugu films even if Telugu films limit themselves to preaching.
LEAVE A COMMENT
fullhyd.com has 700,000+ monthly visits. Tell Hyderabad what you feel about Shatamanam Bhavati!
MORE MOVIES
Latest Reviews
Don't Worry Darling
Vikram Vedha
Ponniyin Selvan - 1
Naane Varuvean
Nene Vasthunna
more
Krishna Vrinda Vihari
Saakini Daakini
Where the Crawdads Sing
Everything Everywhere All At...
Aa Ammayi Gurinchi Meeku Che...
Brahmastra: Part One - Shiva
Oke Oka Jeevitham
Brahmastra: Part One - Shiva
Ranga Ranga Vaibhavanga
First Day, First Show
Contemporary Reviews
The Founder
The Bye Bye Man
Raees
Kaabil
Luckunnodu
more
Nenu Local
Resident Evil: The Final Cha...
OK Jaanu
Live By Night
Gautamiputra Satakarni
Khaidi No. 150
Allied
A Monster Calls
Coffee With D
Random Reviews
Bhavani
Uncle
Monsters Inc
Resident Evil
Godavari
more
The Beach Girls
Saali Poori Gharwali
The Game Plan
Evaraina Epudaina
The Expendables (Hindi)
That Girl In Yellow Boots
People's War
Thoofan
Solo: A Star Wars Story
Ruler
SEARCH MOVIES
Dissatisfied with the results? Report a problem or error, or add a listing.
ADVERTISEMENT
SHOUTBOX!
{{todo.name}}
{{todo.date}}
[
ip{{todo.ip}}
]
{{ todo.summary }}... expand »
{{ todo.text }} « collapse
First  |  Prev  |   1   2  3  {{current_page-1}}  {{current_page}}  {{current_page+1}}  {{last_page-2}}  {{last_page-1}}  {{last_page}}   |  Next  |  Last
{{todos[0].name}}

ADVERTISEMENT
This page was tagged for
satamanam bhavathi telugu movie
telugu deevena satamanam
satamanam bhavati full movie in telugu
satamanam bhavati full movie
Shatamanam Bhavati telugu movie
Follow @fullhyderabad
Follow fullhyd.com on
About Hyderabad
The Hyderabad Community
Improve fullhyd.com
More
Our Other Local Guides
Our other sites
© Copyright 1999-2009 LRR Technologies (Hyderabad), Pvt Ltd. All rights reserved. fullhyd, fullhyderabad, Welcome To The Neighbourhood are trademarks of LRR Technologies (Hyderabad) Pvt Ltd. The textual, graphic, audio and audiovisual material in this site is protected by copyright law. You may not copy, distribute, or use this material except as necessary for your personal, non-commercial use. Any trademarks are the properties of their respective owners. More on Hyderabad, India. Jobs in Hyderabad.