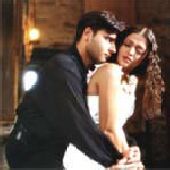 EDITOR RATING
3.0
Performances
Script
Music/Soundtrack
Visuals
NA
NA
NA
NA
Suggestions
Can watch again
NA
Good for kids
NA
Good for dates
NA
Wait for OTT
NA
The badshah of mega-budget blockbusters, the reigning rani of Bollywood, the monarch of Malayalam, the dashing hunk of Mollywood and the magic heroine of Maachis. A casting coup this. And with this fairy tale combination, Rajeev Menon tries to spin out a fairy tale, literally.

Only there is no tale to make the fairies interesting. The fairest of all fairies, Aishwarya Rai, believes in being swept off her feet by a romantic; her accursed sister, Tabu is a down-to-earth seedhi-saadhi ladki, who takes life as it comes. The two sisters start off on a good note. While Ajit, a young assistant director, steals the heart of the elder, the younger meets a like-minded Abbas.

All is well that begins well. But, like in all fairy tales, the riches are soon gone, the girls are forced to migrate to Hyderabad, the lovers are no where in sight. And the family is left to fend for itself.

The fairy tale ends there and the sob story begins. And it is sobs, sobs and even more sobs till the end; both, for the cast and the audiences. There is no denying the fact that we are living in an age, when the container looks more important than the content. And it is sound logic too.

But, to sell your product on the basis of the container alone is asking for too much. Rajeev Menon does precisely that. The result: the breathtaking cinematography serves no purpose. The screenplay is horrible and the songs are as bad, sans one with the two belles of Bollywood singing and bathing in the village pond. All said and done, the farther you keep away from the movie (this is a dubbed version of the Tamil "Kando Konden Kando Konden"), the better. Unless you want to see the ravishing Ash, that is.
Share. Save. Connect.
Tweet
PRIYURALU PILICHINDI SNAPSHOT

ADVERTISEMENT
This page was tagged for
doston doston doston Telugu movie songs please MP3
telugu movie priyuralu pilichindi naa mp3 songs
priyaralu pilichindi movie
priyuralu pilichindi movie rating
priyuralu pilichindi movie review
Follow @fullhyderabad
Follow fullhyd.com on
About Hyderabad
The Hyderabad Community
Improve fullhyd.com
More
Our Other Local Guides
Our other sites
© Copyright 1999-2009 LRR Technologies (Hyderabad), Pvt Ltd. All rights reserved. fullhyd, fullhyderabad, Welcome To The Neighbourhood are trademarks of LRR Technologies (Hyderabad) Pvt Ltd. The textual, graphic, audio and audiovisual material in this site is protected by copyright law. You may not copy, distribute, or use this material except as necessary for your personal, non-commercial use. Any trademarks are the properties of their respective owners. More on Hyderabad, India. Jobs in Hyderabad.