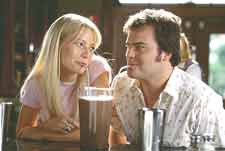 Smriti Kashyap / fullhyd.com
EDITOR RATING
3.0
Performances
Script
Music/Soundtrack
Visuals
NA
NA
NA
NA
Suggestions
Can watch again
NA
Good for kids
NA
Good for dates
NA
Wait to rent it
NA
Shallow waters run deep or some arcane crap like that. Count out Hal (Jack Black). He is about as shallow as they come, thanks to starting off on his wrong foot with some really corny advice given by his dad on his deathbed, which is to "never settle for anything less than the best" (that is when it comes to them chica bonitas).

The last thing anybody needs to take seriously is advice from a guy, let alone from a guy who's just about to kick the bucket. But not ol' Hal! According that stuff the status of manna from the heavens, he sets out on a woefully pathetic life trying constantly to land gals painfully out of his league. I thought men like that always shot themselves! Anyway, someone do a reality check, stat!

A mental midget with the IQ of a fence post and completely unspoiled by failure, Hal goes through life looking only for looks and nothing else in a femme, until the fateful day he meets self help guru Tony Robbins (as himself). Stuck in an elevator, Tony brainwashes Hal to look for the Inner Beauty and quit being so obsessed with the outer shells of the ladies - which is exactly what happens when he meets Rosemary (Gwyneth Paltrow).

Sweet, sensitive and a volunteer at kids' hospitals, Rosemary is the quintessential nice gal, except that she weighs as much as a baby elephant with marching boots on. Let's just say that in her single person she manages to produce the effect of a majority. Hal doesn't see the bulky exterior, and goes straight for her heart and dates her. Nobody can figure why shallow Hal is hanging around a gal who obviously doesn't figure too high in the cover girl department.

This is when the flick gets koncham hyper and drags its feet on a couple of jokes, all the while trying really hard to be politically correct. It's almost like saying "photocopy, photocopy" when you're dying to yell out "Xerox".

Now you know that the higher the monkey climbs, the more can you see of its behind, which is exactly the case with this movie. A couple of really unfunny jokes, and the movie turns into a one- gag, one ha ha movie. Give us break fellas, and throw some nasties this way, willya? What was that scene about Gwenny diving into the pool and the kid in it getting cannoned into the trees? Yeah, even my 6-month-old pet goat didn't find that funny. And why is Jason Alexander called Mauricio? I thought names like that died out with Robin Hood and his merry men.

It's easier catching a Russian flick with German subtitles endorsing the need to look beyond the obvious and go for the heart and not the hairspray (yaaaawn, I thought that the Miss. India contests did a pretty bang-up job of that?). If you want this message wrapped in a sixteen meter piece of yarn and banged across your skull, then catch this movie.

En fin, this is not a flick to be tossed aside lightly, it should be hurled aside with great force!
Share. Save. Connect.
Tweet
SHALLOW HAL SNAPSHOT

ADVERTISEMENT
This page was tagged for
Shallow Hal english movie
Shallow Hal reviews
release date
Gwyneth Paltrow, Jack Black
theatres list
Follow @fullhyderabad
Follow fullhyd.com on
About Hyderabad
The Hyderabad Community
Improve fullhyd.com
More
Our Other Local Guides
Our other sites
© Copyright 1999-2009 LRR Technologies (Hyderabad), Pvt Ltd. All rights reserved. fullhyd, fullhyderabad, Welcome To The Neighbourhood are trademarks of LRR Technologies (Hyderabad) Pvt Ltd. The textual, graphic, audio and audiovisual material in this site is protected by copyright law. You may not copy, distribute, or use this material except as necessary for your personal, non-commercial use. Any trademarks are the properties of their respective owners. More on Hyderabad, India. Jobs in Hyderabad.