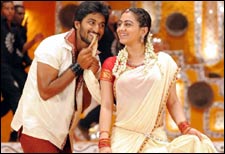 Deepa Garimella / fullhyd.com
EDITOR RATING
5.0
Performances
Script
Music/Soundtrack
Visuals
8.0
3.5
7.0
8.0
Suggestions
Can watch again
No
Good for kids
Yes
Good for dates
Yes
Wait to rent it
Yes
Firstly, Ride is not a mean, fast-paced action film riddled with bike chases and wheelies and stoppies and sultry women in leather hot pants. You wouldn't know this piece of trivia until you came to the end of the movie. For a film whose title screams 'thrill', Ride is more 'aww' than 'ooh'. That's one of the things that will happens when you make a movie about two college kids sulking over a TVS bike.

Mahesh (Tanish) is a college drop-out who has to earn to keep his family going, and his new-found job needs him to have a bike. In another world, Arjun (Nani) is a guy who'd kill to wrap himself around a bike - more because it means that girls will then wrap themselves around him, than any real geeky fervour for the machine. The problem is his skinflint of a father (Ahuti Prasad) who believes that a college-going kid can get by on Rs. 200 a month.

Mahesh is the first to lay his hands on a 2-wheeler, and is doing fine until his bike gets stolen. He finds it is being driven around by this character he's never seen, who turns out to be Arjun. The two bump each other around for a while, and after a bit of mud-slinging and blood-capillary-bursting, agree to share the bike, since each has his own compelling needs to drive it.

Before you know it, Mahesh and Arjun become thick friends, sing a nestam duet together and wear the same coloured shirts, and their babes (Shweta Basu & Aksha, respectively) are done being wooed. Technically, the story's done by now. The Tinkle-style narration still might have been forgiven, if the plot didn't aimlessly run into cliche-land, including a villain and an unimaginative climax involving a completely tame bike race.

Ride spends way too much time building up a premise, and incidentally, that's the interesting part. Then, by the time we get to any actual issue, the story fizzles out. The first half has some detailed characterization, a lot of comedy (including insider jokes on the lead actors' debut films), and the promise of some intelligent action further ahead.

The first half has its flaws, though. The romances are virtually non-existent. The fight sequences between the two are not set up properly, so the whole settling of scores bit seems as flimsy as a pair of third-graders coming to blows over a pencil box. Of course, the question 'why couldn't they have talked it out in the first place?' is very, very impolite at this point. Also, there are a couple of those grinding 'nenu cheppedi koncham vinipinchukovandi' moments that we thought died when free speech was invented.

Nani, Tanish, Shweta Basu and Aksha are all from among last year's favourite hits (Ashta Chemma, Nacchavule, Kotha Bangaru Lokam and Yuvatha, respectively), and while Aksha was just scenery in her film, the other three have been noticed specifically for their acting talent. In particular, Nani is easily the most proficient of the whole set - his comic timing borders on genius.

Basu is cute, but is there just for some songs, and is a misfit in her role, and is unfairly given just 5% of what she's capable of. Not that she's not tried looking like a bombshell; it's just that she and her guy look like they need to go attend their school annual day function first - both she and Tanish look miles away from adulthood. Aksha is vivacious, and does well what she was hired for.

Dharmavarapu has a hilarious comedy track, and Brahmanandam has one or two jokes. The rest of the elder cast, including Ahuti Prasad, Sudha and Tulasi, are their usual selves.

The makers seem to have had an awesome sense of colour - it's mostly a teen drama, and the look and feel of the film seem refreshing. Between Mahesh's broke family and Arjun's relatively well-off home, the visuals are sensible, and yet rich.

Ride has some of the most creatively choreographed songs in recent times - both the settings and the choreography are a treat to watch. You shouldn't miss the danchu danchu remix - it's quite funny. The music, however, is heavy on electronics, and will be remembered only if the film works.

ADVERTISEMENT
This page was tagged for
ride Telugu cinema
Ride telugu movie
Ride reviews
release date
Follow @fullhyderabad
Follow fullhyd.com on
About Hyderabad
The Hyderabad Community
Improve fullhyd.com
More
Our Other Local Guides
Our other sites
© Copyright 1999-2009 LRR Technologies (Hyderabad), Pvt Ltd. All rights reserved. fullhyd, fullhyderabad, Welcome To The Neighbourhood are trademarks of LRR Technologies (Hyderabad) Pvt Ltd. The textual, graphic, audio and audiovisual material in this site is protected by copyright law. You may not copy, distribute, or use this material except as necessary for your personal, non-commercial use. Any trademarks are the properties of their respective owners. More on Hyderabad, India. Jobs in Hyderabad.