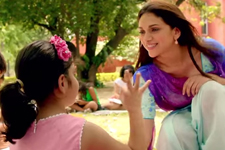 Nupur Barua / fullhyd.com
EDITOR RATING
5.0
Performances
Script
Music/Soundtrack
Visuals
7.0
5.0
6.0
7.0
Suggestions
Can watch again
No
Good for kids
No
Good for dates
Yes
Wait for OTT
No
Orchestra singers moonlighting as informers for the underworld? Only in Haryana, of course. Subhash Kapoor's latest, after his much appreciated Jolly LLB, is unfortunately a mash-up of Welcome 2 Karachi, the Munnabhai movies, the Ishqiya series... in fact, any movie from the past decade that has had Arshad Warsi in a leading role. To simplify - it is an Arshad Warsi movie, and, like in a Salman Khan film, you really do not care what the story is, and you know exactly what he is going to be saying or doing on the big screen.

Which does not mean that the story does not have substance. Subhash Kapoor has moved on to honour killings and the like (which you perhaps already gather, given that the movie is based in Haryana), and peppered the film with a liberal dash of justification for vendetta seekers. Brothers Rangeela (Arshad Warsi) and Guddu (Amit Sadh) really want to climb the ladder of success in the underworld. They make a living otherwise by singing at functions, and have an average-decent life. Rangeela is slightly morose, with a grim sense of humour, and Guddu chases anything in a skirt.

When they are brought in for questioning by the police, the brothers are told that they need to "pay" a certain fine for their activities. Much against Rangeela's wishes, Guddu arranges to kidnap Baby (Aditi Rao Hyadri), hoping to raise the required amount, and more. It turns out that Baby has a connection to Billo (Ronit Roy), the crime kingpin of the area, and suddenly, this reluctant kidnapping could be the best thing ever to happen to Rangeela and Baby. Mutual enemies make the most trustworthy friends, and revenge is always a dish best eaten cold, as the brothers and Baby join hands to bring down Billo.

The film is dominated by Rangeela's dialogues. He has the best lines, and the best situations to deliver those lines in. All the characters have back stories, and they are cleverly revealed at the right moments. The theme - crime of passion, or passionate crime - is inserted verbally in the most mundane manner, but the message gets across. The plot is otherwise pretty staid, and not as compelling as it was in Kapoor's previous film. The first half is entertaining enough, but the second half loses pace, and the journey to the climax becomes tedious.

Also, this is the nth movie that tells us that Haryana is a terrible place to be an honest man or woman (especially woman) in, and that everybody has hidden streaks of violence that could not care a damn about the law. Although Guddu Rangeela is a fresh release, and not similar to other movies set in Haryana, you get the feeling that you have seen it all before.

The movie would have appeared even more jaded if it were not for the performances of Arshad Warsi and Ronit Roy. They play stereotypes of themselves (or of their performances in previous movies), but they are riveting. Roy is the bad guy, intimidating you with his killer expressions, and Warsi is the buffoon, with his wisecracks. Both have done this so many times that it is possible that they could have sleepwalked through their roles. In this movie, they bring to life scenes that could have otherwise bored you to tears.

One of the best performances comes from Rajiv Gupta, who plays a police inspector. Amit Sadh and Aditi Rao Hyadri are slightly dull, overshadowed as they are by their co-stars. They do offer some glamour, though.

Haryana as a setting is so familiar to us now that we can probably become cartographers for the area. That being said, Guddu Rangeela showcases some great cinematography, especially in the action sequences. The music by Amit Trivedi may not be his best, but some of it is catchy enough to stay on in your mind for a while. The editing is pretty slick.

Some controversy and court cases still surround the movie, but now that it is released, we suggest you take a look at it. Especially if you love Arshad Warsi or Ronit Roy, or both.
Share. Save. Connect.
Tweet
GUDDU RANGEELA SNAPSHOT 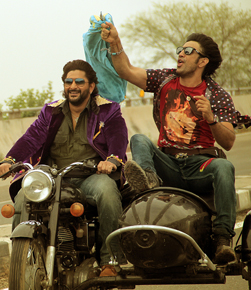 ADVERTISEMENT
This page was tagged for
Guddu Rangeela hindi movie
Guddu Rangeela reviews
release date
Arshad Warsi, Amit Sadh
theatres list
Follow @fullhyderabad
Follow fullhyd.com on
About Hyderabad
The Hyderabad Community
Improve fullhyd.com
More
Our Other Local Guides
Our other sites
© Copyright 1999-2009 LRR Technologies (Hyderabad), Pvt Ltd. All rights reserved. fullhyd, fullhyderabad, Welcome To The Neighbourhood are trademarks of LRR Technologies (Hyderabad) Pvt Ltd. The textual, graphic, audio and audiovisual material in this site is protected by copyright law. You may not copy, distribute, or use this material except as necessary for your personal, non-commercial use. Any trademarks are the properties of their respective owners. More on Hyderabad, India. Jobs in Hyderabad.