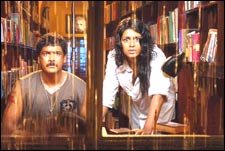 Deepa Garimella / fullhyd.com
EDITOR RATING
3.5
Performances
Script
Music/Soundtrack
Visuals
6.0
3.5
7.5
6.0
Suggestions
Can watch again
No
Good for kids
No
Good for dates
No
Wait to rent it
Yes
Vamsi (Sivaji) has just bought a desolate house on the outskirts of Vizag. A local dancer takes a fancy to him after he protects her from a desperate lover (Jeeva). She wants to come in from the torrential rain outside, and he won't let her in. But after he sees her dance in the rain, he beckons to her to come in. Maybe because he hates to see someone have so much fun, when he's cooped up in a funny house with just a grandfather clock, a massive library, and one month's stock of Bantia Furnitures for company.

He's on the whole, irritated with her, and will do anything to keep her away from him. So he decides to pick up a book from the library, not to smack her across the head, but to read. He comes across a diary that keeps warning readers against prying into someone's personal diary. But he goes on, and finds that the diary throws up a lot - maybe because it just read the role it has to play in the film. It also throws up an interesting story of a couple who lived in the house.

Now Maya has started getting scared out of her wits. Vamsi, who's reading the diary, is not one bit scared. Maya tries to dissuade him from reading any further, but he doesn't. But what he sees just before the interval horrifies him enough to make him stop reading for a while - the script for the rest of the movie.

But soon after the interval, he's back to the diary. He soon finds himself doing exactly what certain lines in it describe, much to his shock. These scenes show some good scope for Sivaji's talent. The blank spaces between those lines are also dealt with. In the expressions of Maya.

A tragic accident and a pleasant cameo by Harshavardhan later, the film draws to an end that calls for a few explanations. Who wrote that diary? Where is Albert now? Who thought up this ridiculous ending?

Diary is a semi-horror thriller, with a good share of creeps, aided by some terrific sound effects and music. And Sivaji. However, on the whole, the film is very feeble-minded. There are many scenes and dialogues that don't add up, and the climax is a shocking farce.

Sivaji is good as the plucky and persistent diary-snoop. Shraddha Das has hardly any role. They tried giving her some substance in the second half, but it just seems like her idea of bloodcurdling is putting on a thicker layer of kajal under her eyes. And like we mentioned, the scary scenes are well-done, though not as much visually as with the ominous sound track.

On the whole, Diary will suit you if you're utterly starved of jitters.
Share. Save. Connect.
Tweet
DIARY SNAPSHOT

ADVERTISEMENT
This page was tagged for
Diary telugu movie
Diary reviews
release date
Sivaji, Shraddha Das
theatres list
Follow @fullhyderabad
Follow fullhyd.com on
About Hyderabad
The Hyderabad Community
Improve fullhyd.com
More
Our Other Local Guides
Our other sites
© Copyright 1999-2009 LRR Technologies (Hyderabad), Pvt Ltd. All rights reserved. fullhyd, fullhyderabad, Welcome To The Neighbourhood are trademarks of LRR Technologies (Hyderabad) Pvt Ltd. The textual, graphic, audio and audiovisual material in this site is protected by copyright law. You may not copy, distribute, or use this material except as necessary for your personal, non-commercial use. Any trademarks are the properties of their respective owners. More on Hyderabad, India. Jobs in Hyderabad.