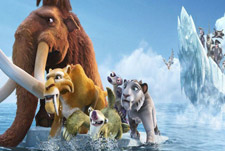 Kritika Deval / fullhyd.com
EDITOR RATING
7.0
Performances
Script
Music/Soundtrack
Visuals
7.0
6.0
6.0
9.0
Suggestions
Can watch again
Yes
Good for kids
Yes
Good for dates
No
Wait for OTT
No
Meeting old friends, some honest-to-God LOL moments, delightful new characters and great visuals are some of the things that make Ice Age 4 a fun watch. You'll notice that a good storyline was not included in the above list. This movie, while an entertaining enough watch, is a definite sign that the franchise has only a tenuous hold on its tether.

Moody Manny the mammoth (Ray Romano), Sid the giant sloth of the "know me at your own peril" fame (John Leguizamo), and "fear me for I'm a dangerous sabre-tooth" Diego (Denis Leary) are definitely happy to be back, along with Ice Age's true star, Scrat the nuts-over-nuts squirrel.

Scrat, as always, sets off yet another disaster in the calamitous pursuit of his beloved acorn, the disaster du jour being continents breaking off and drifting away from the original Pangea landmass.

Meanwhile, there's plenty happening with the rest of our pals from pre-history. Manny and Ellie (Queen Latifah) have a teenage daughter, Peaches (Keke Palmer), whose relationship with her parents resembles that in just about every teen movie in existence. And Sid gets reunited with his long lost family, only to be abandoned again, this time along with his annoying granny (Wanda Sykes).

Soon afterwards, following a highly predictable turn of events, our favorite primeval trio, along with Granny, gets separated from the rest when the ice breaks off due to the drifting of land (seriously, these guys should just call it the "Breaking The Ice" series and call it a day). As the four of them drift into the ocean on an icy raft, they soon find that the seas are a dangerous place, ruled by a ruthless giant monkey pirate of the name Captain Gutt (Peter Dinklage).

Manny steals Gutt's "ship", thus hurtling himself to the top of the pirate's hit list. In the meantime, Diego seems to be falling in love with Shira (Jennifer Lopez), the lovely tigress, who is Gutt's foreman. Sid, on the other hand, is entirely preoccupied with keeping himself and his batty old Granny alive, a difficult task for just anyone, and one that turns Herculean when involving Sid.

What follows is an epic journey over the oceans, replete with equally epic obstacles in the form of storms, sirens, and Captain Gutt. Meanwhile, follow Scrat's story to find out what really happened to the lost kingdom of Atlantis.

The biggest crack in Ice Age 4 is that it spins out a lot of rather promising threads which are either left loose or are tied up rather messily. Beyond the basic premise of the story, the plot is rather lazily executed, relying on star power, former glory, and fantastic visuals to carry the weight of the movie. Since believability is not something we're looking for, we can ignore the fact that when the real Ice Age happened, all the continents had already been in place for about 200 million years.

It is entirely to the credit of the characters that you don't find yourself bored at any point of the movie. Apart from the usual banana-peel humour that appeals to children, there's plenty of rather intelligent tongue-in-cheekiness to bring out everything from sly sniggers to wry chuckles from the adult section of the audience. There are plenty of historical and literary references thrown in along with a liberal dash of impudence to keep you plenty stimulated and amused.

Among the new characters, Granny, with her salty tongue and her propensity for wandering into trouble, is the most memorable of the movie's cast. The rest of them have simply been mass produced from the Fox Animation flat character factory. The usual cast does not disappoint. Wherever the plot lets the movie down, the chemistry between the lead characters, spiffy dialogues and impressive animation uplift it. The music is nothing to write home about, save for one or two numbers that set your foot tapping (Master Of The Seas - hilarious). 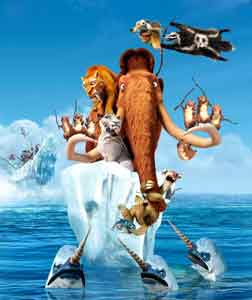 ADVERTISEMENT
This page was tagged for
ice age 4 movie in hindi 3gp videos
ice age 4 download full movie in hindi
ice age continental drift hindi
iceaji all move hindi
ice age 4 Full movie download in Hindi
Follow @fullhyderabad
Follow fullhyd.com on
About Hyderabad
The Hyderabad Community
Improve fullhyd.com
More
Our Other Local Guides
Our other sites
© Copyright 1999-2009 LRR Technologies (Hyderabad), Pvt Ltd. All rights reserved. fullhyd, fullhyderabad, Welcome To The Neighbourhood are trademarks of LRR Technologies (Hyderabad) Pvt Ltd. The textual, graphic, audio and audiovisual material in this site is protected by copyright law. You may not copy, distribute, or use this material except as necessary for your personal, non-commercial use. Any trademarks are the properties of their respective owners. More on Hyderabad, India. Jobs in Hyderabad.