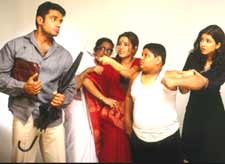 Smriti Kashyap / fullhyd.com
EDITOR RATING
5.0
Performances
Script
Music/Soundtrack
Visuals
NA
NA
NA
NA
Suggestions
Can watch again
NA
Good for kids
NA
Good for dates
NA
Wait for OTT
NA
Looks like Shetty brother's long time investment in acting classes seem to be finally paying dividends. Not rich dividends, but dividends none the same. He teams up with the 'Hera Pheri' team once again hoping for the same gold rush - only, 'Yeh Tera Ghar...'s genre of comedy is written by the sort of guys who wouldn't know what a joke is even if it rose out of the dead and stared at them in the face.

The movie tries to be poignant, serious and funny all the same time, thereby turning into a poignantly serious funny film. This is exactly the sort of movie you are giggling mindlessly at one point and watching with a puzzled expression with your mouth open, not dissimilar to a seal waiting for a fish to be thrown in, at other times. Don't get my drift? Lemme explain.

Poor Dayashankar (Shetty) has all his misfortunes thrown into a bag and shoved into his hands. His house and property are mortgaged, and in order to get himself out of this sticky situation, he needs to go to Mumbai to sell his other house. Mahima Chaudary and her entourage occupy this place. He tries to get rid of them but to no avail. So to solve it all, he decides to move in with them, so that they get bugged and finally move out.

The whole movers and shakers thing doesn't pan out. So Shetty takes the help of his bumchum Paresh Rawal, who is now a cop. But Rawal, the moment his visual senses register Mahima, falls in love with her. The plot doesn't end there. There are a whole lot of peripheral characters that have a lot to do with the story's orbit.

What happens in the end is nothing a 6-year-old can't guess, but some really hilarious situations prevent you from shutting off your thought process. The whole movie borders on mayhem with every character screeching and shrieking like a banshee. At one point, the whole screen seems ablaze with shouting, arm-flailing, hyperventilating characters. Slightly unnerving, but hell, we've seen worse.

Paresh Rawal is the absolute star of this manic movie of mortgages, money and mayhem that reminds you of those old Utpal Dutt / Jaya Bhaduri / Rameswari starrers. He has a brief but superb role to play, and looks centuries younger with his dapper new wig and fake moustache. Sunil Shetty has a bleeding nose at the end of the film, which makes it intensely difficult to concentrate on what he is sputtering out as his lines (not that we understood any of his previously sputtered lines). Mahima is absolute fun to watch - she would get my vote for the 'Fisherwoman Of The Year'. She puts up a spirited performance, and doesn't believe in giving her already threadbare vocal chords any rest.

There are a couple of funny scenes in the movie, but that's about it. It's like eating a whole barrelful of kheer to find two almonds. The whole script seems to be highly charged, and the writers seem to have lost focus after the initial high.

Finalement, check out the film if you have friendly videowallah - don't add to the already fast depleting natural resources by hauling your bike out to go to the theater. Stay at home, vegetate and giggle.
Share. Save. Connect.
Tweet
YEH TERAA GHAR YEH... SNAPSHOT
YEH TERAA GHAR YEH MERAA GHAR SNAPSHOT

ADVERTISEMENT
This page was tagged for
Mp4moviez ye tere Ghar ye Mera ghar
Yeh Teraa Ghar Yeh Meraa Ghar hindi movie
Yeh Teraa Ghar Yeh Meraa Ghar reviews
release date
Sunil Shetty, Mahima Chaudhary
Follow @fullhyderabad
Follow fullhyd.com on
About Hyderabad
The Hyderabad Community
Improve fullhyd.com
More
Our Other Local Guides
Our other sites
© Copyright 1999-2009 LRR Technologies (Hyderabad), Pvt Ltd. All rights reserved. fullhyd, fullhyderabad, Welcome To The Neighbourhood are trademarks of LRR Technologies (Hyderabad) Pvt Ltd. The textual, graphic, audio and audiovisual material in this site is protected by copyright law. You may not copy, distribute, or use this material except as necessary for your personal, non-commercial use. Any trademarks are the properties of their respective owners. More on Hyderabad, India. Jobs in Hyderabad.