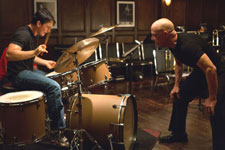 Nupur Barua / fullhyd.com
EDITOR RATING
8.0
Performances
Script
Music/Soundtrack
Visuals
8.0
8.0
9.0
7.0
Suggestions
Can watch again
Yes
Good for kids
No
Good for dates
Yes
Wait to rent it
No
Whiplash is director Damien Chazelle's second movie, and is based on his experiences as a student of music. In a recent interview, he confessed that he realized he does not have what it takes to be a musician, but in the movie, he puts forth a pertinent question - does perfection arise from pure talent and genius, or from dedicated pursuit of excellence?

Terence Fletcher (J K Simmons) believes that practice makes perfect. Which is why he, in his capacity as jazz instructor and conductor at the Shaffer Conservatory, New York, drives his students to the pits of low self-esteem. He is personal and uninhibited with his abuses, and he makes grown men cry. In fact, he is almost sadistic with his name calling and physical punishment.

Andrew Neiman (Miles Teller) is a first-year student at the Conservatory, and plays the drums. Fletcher takes him into his studio band as an alternate for Carl (Nate Lang). Andrew becomes Fletcher's punching bag, and he throws chairs at the young man, and even slaps him, because the former cannot seem to get the tempo right.

However, the more abusive Fletcher gets, the more resilient Andrew becomes. Not only because he wants Fletcher's approval, but also because he genuinely believes that he is destined to be a great, like Buddy Rich. At a local jazz competition, Carl panics because his sheet is lost, and Andrew, who knows the piece, Whiplash, by heart, fills in.

Fletcher shows no favouritism, however, and pushes Andrew harder and harder, until the latter breaks and goes from nervous student to violent victim. In the process, both student and teacher go through some life-altering incidents that separate them, but they are soon reunited, only to go through some more gruelling times. Is Fletcher avenging his humiliation, or is Andrew too cocky to realise that he may not really have it in him? Or is Fletcher so convinced of Andrew's inherent genius that he tries to bring out the best in him?

The movie lets you come to your own conclusions. Fletcher's angst is never really explained, and he becomes the antagonist, so to speak. Andrew, on the other hand, almost kills himself on his way to eternal fame. The screenplay sticks to the chemistry between student and teacher, and everybody else is secondary. Both the writer and the characters themselves give nobody else any importance - family, lovers, friends, nobody. Fletcher and Andrew are obsessed with proving each other wrong, and they give up on anything that is remotely sentimental, to attain their individual goals.

Andrew is not really an underdog, and there are times when you may despise his madness, but it is clear that he is the protagonist. He is the wronged one here, no matter how justified you think Fletcher's methods are. However, there are times when you wonder whether there is a point to Fletcher's way. This debate carries on throughout the movie, and does not come to a definite conclusion.

Fletcher's dialogues are peppered with the choicest abuses, and some may find them hilarious, but most will think they are offensive. In fact, many accomplished artisans and musicians may think that Fletcher is an exaggerated caricature, the likes of whom do not exist, and that the resolution at the end is not a satisfactory culmination of events. And yes, there is a bit of the absurd in the way Fletcher is written. It almost seems as if Damien Chazelle is trying too hard to tell us that this is an evil man, that one needs to hate him. The glorification of sacrifice is overdone a bit, and the climax is rather surreal.

Miles Teller plays a sulking, friendless, arrogant and anti-social young man with such aplomb that you may end up believing he is like that in real life, too. His face has a lot of character, and that helps in his delivery. He is on his way to stardom already, and this film may just be his best so far. In fact, he actually knows how to play the drums, so those are his hands you see wielding the sticks.

J K Simmons, on the other hand, is beyond fantastic. The Academy Award nominee in the Best Supporting Actor category this year truly deserves all the credit he can get, and more. The other actors are effective, but you have eyes only for the two main characters, all the time.

The production design is almost pristine, which is how one may perceive a Conservatory, but it also incorporates spaces such as pubs to underline the tribute to jazz. The costumes are appropriate for the genre, and bring out the difference between the stark mature Fletcher and the young rebellious Andrew.

Special effects are few and far between, but they have the desired impact. The cinematography is subtle. And the editing is near perfect, despite the long periods of silence between the music and the abuses.

The hero of the movie, however, is the music. You have to hear it to believe just how good it is. Couple that with the visuals of Andrew and the band playing it, and you have a definite winner. In fact, the final piece will leave you breathless.

A teacher-student movie is not uncommon in Hollywood, but most of them border on the mushy and the predictable. Whiplash shows us the uglier version of a mentor who aims at perfection and has fun torturing his students. It is not a politically correct film, and that may upset some of the audience. Neither is it a preachy film, which is a relief, despite the very intense but simplified dialogues. It is also not an easy movie to watch, but watch it you can, even if you do not understand jazz. You will not regret it.
Share. Save. Connect.
Tweet
WHIPLASH SNAPSHOT 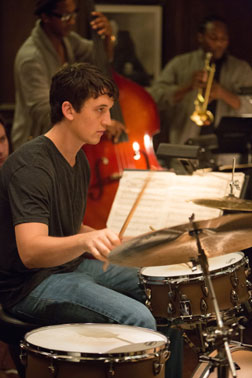 ADVERTISEMENT
This page was tagged for
Whiplash english movie
Whiplash reviews
release date
Miles Teller, J K Simmons
theatres list
Follow @fullhyderabad
Follow fullhyd.com on
About Hyderabad
The Hyderabad Community
Improve fullhyd.com
More
Our Other Local Guides
Our other sites
© Copyright 1999-2009 LRR Technologies (Hyderabad), Pvt Ltd. All rights reserved. fullhyd, fullhyderabad, Welcome To The Neighbourhood are trademarks of LRR Technologies (Hyderabad) Pvt Ltd. The textual, graphic, audio and audiovisual material in this site is protected by copyright law. You may not copy, distribute, or use this material except as necessary for your personal, non-commercial use. Any trademarks are the properties of their respective owners. More on Hyderabad, India. Jobs in Hyderabad.