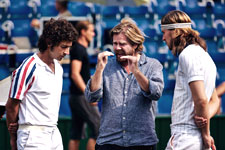 T J Reddy / fullhyd.com
EDITOR RATING
7.0
Performances
Script
Music/Soundtrack
Visuals
7.0
7.0
6.0
8.0
Suggestions
Can watch again
Yes
Good for kids
No
Good for dates
Yes
Wait to rent it
No
The Damned United is a football movie which is not actually about football. This year's It is a horror movie whose real villain is not the killer clown. Whiplash is a film that has drumming coursing through its veins but is not solely about drumming. Good films use either sports or art or the supernatural as a conduit to tell wholly human stories. The humanity they lay bare is what makes them so immensely watchable. Borg McEnroe is one such film.

As the movie's title and poster so clearly suggest, this film chronicles the face-off between Bjorn Borg (Sverrir Gudnason) and John McEnroe (Shia LaBeouf) at the finals of the Wimbledon Championships. In 1980, the cool and calculating Ice-Man Borg was gunning for his 5th straight Wimbledon title (which had never been done before) whereas the fiery brat of tennis, John McEnroe, had made it to his first final on Centre Court. Between the start of the tournament and the last stroke played at the finals, the movie chronicles the men's lives and the experiences that got them to the All England Lawn Tennis and Croquet Club. Yes, this is a story where the sport of tennis is only the backdrop.

Like many episodes of Captain Tsubasa, Borg McEnroe chooses to peel the layers behind the celebrity, noise, fame, fortune and loneliness of a sportsperson. Behind the carefully crafted image and brand are stories of men and women who struggle with pressures and broken personal lives that would make many lesser heads implode. But this is just scratching the surface of a movie brimming with thematic significance.

We are usually advised by our seniors, in both personal and professional lives, to keep journals of our daily activities. The reason they endlessly quote is that these journals work as fantastic roadmaps that we can look back on and learn from when we find ourselves searching for answers in our daily lives. A person who doesn't learn from the past is bound to repeat his mistakes and all that.

But this film asks: What if those mistakes gained sentience, took a human form and came at us with a vengeance? Would we be able to handle it? Would we crack under the pressure of trying to defeat what we were running away from for so many years? Does the fact that we created a better persona for ourselves over years of dedication take away from the bitter truth that, in our minds, most of us are actually terrified overachievers punching above our weight class always scared of the fact that the world we've built for ourselves can come crashing down at the first whiff of defeat?

To paraphrase Kendrick Lamar, "When the s*it hits the fan, do we have any real fans?" Or is it really that lonely both at the top and at defeat? Does fake it till you make it actually work? Did all those TED talks lie to us?

These are hard questions to answer for fully functioning human beings, let alone a 100-minute film. Because of its limited time and the Swedish director's reverence to his nation's hero (Borg), the film glosses over some of the more touchy aspects of the Ice-Man's life while not spending enough time with the Brat. But the facts that it addresses what it does and asks the questions it does, and the finesse with which it does all this, are what makes this movie so infinitely watchable.

Leading men Sverrir Gudnason and Shia LaBeouf add to this watchability in spades. The skill with which both men embody their characters is almost peerless. This is the Shia LaBeouf we were promised when he was a child actor and in his post-Transformers career, he seems to be delivering on his long-dormant potential with both spectacular memes and spell-binding performances. Sverrir Gudnason matches the enigmatic Borg with both looks and demeanour, and makes for a fantastic foil to LaBeouf's McEnroe.

On the flip side, veteran actor Stellan Skarsgård is only serviceable in a role that gives him very little in terms of exploring his range, and Tuva Novotny comes off as quite the two-dimensional female.

This is a moderate shame as this is quite the interestingly shot film. Being a movie with European sensibilities, it prefers staying with and exploring its characters with either long takes and/or long scenes. These scenes are chock-full of Godard-style jump cuts, symbolic editing and an overall aesthetic that chooses to be low on the loudness when compared to its American counterparts. If only it were slightly less heavy-handed with its symbolism. Europeans can't help showing a wee bit of pretentiousness, I guess.

Also, sure, hindsight is 20-20, but the makers of this film should have channelled some of their aforementioned intelligence into improving its mostly bang-average score. From the overuse of classic rock to extensively reusing a certain theme, the musical cues of the movie are a few steps behind matching the ambitions of the legends the movie is rendering on screen.

Through it all, watching this film is a lonely experience. It is spending two long hours in a cinema hall as you imprint your personality on a bunch of moving images and sounds unfolding on screen. Experiencing the movie and the story it has to tell is a deeply personal exercise, and the opinion you form at the end of it is deeply personal as well. Just as no one can ever truly explain the psychology of what it takes to be a maverick in their field, only you can formulate and express how you feel about this film. This review is but an opinion of one man.
Share. Save. Connect.
Tweet
BORG MCENROE SNAPSHOT 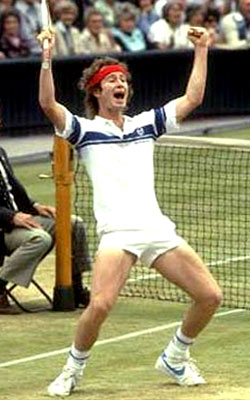 ADVERTISEMENT
This page was tagged for
Borg McEnroe english movie
Borg McEnroe reviews
release date
Sverrir Gudnason, Shia LaBeouf
theatres list
Follow @fullhyderabad
Follow fullhyd.com on
About Hyderabad
The Hyderabad Community
Improve fullhyd.com
More
Our Other Local Guides
Our other sites
© Copyright 1999-2009 LRR Technologies (Hyderabad), Pvt Ltd. All rights reserved. fullhyd, fullhyderabad, Welcome To The Neighbourhood are trademarks of LRR Technologies (Hyderabad) Pvt Ltd. The textual, graphic, audio and audiovisual material in this site is protected by copyright law. You may not copy, distribute, or use this material except as necessary for your personal, non-commercial use. Any trademarks are the properties of their respective owners. More on Hyderabad, India. Jobs in Hyderabad.