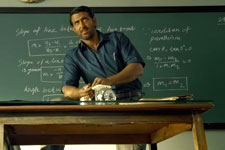 T J Reddy / fullhyd.com
EDITOR RATING
6.0
Performances
Script
Music/Soundtrack
Visuals
7.0
4.0
5.0
7.0
Suggestions
Can watch again
No
Good for kids
Yes
Good for dates
Yes
Wait for OTT
No
We are not as good at math as Anand Kumar or the 30 students under his tutelage, so bear with us as we do some simple mathematics while we share our opinions about his biopic.

Born into a lower middle-class family, Anand Kumar (Hrithik Roshan) is a state award-winning mathematician. His dreams of pursuing a higher education at Cambridge University are dashed owing to his circumstances, and he subsequently takes up the position of a teacher at an IIT-JEE coaching centre to support his family.

But being an active part of the class-based education mafia doesn't sit well with him. He distances himself from said mafia but stays on as an educator. He establishes a free-of-cost institute that assembles the 30 best underprivileged students from his locality and coaches them for the IIT-JEE entrance examination. The outcome of Anand Kumar's noble gesture forms the remainder of the narrative.

The title and trailer for Super 30 may lead you into believing that this is a movie about Anand Kumar, the 30 uniquely talented individuals he mentors, and a couple of Bihari bad guys that oppose his endeavours. If our math isn't wrong, the film should offer us a grand total of 33 characters.

But in reality, director Vikas Bahl's latest offering isolates Anand Kumar, makes the 30 gifted students indistinguishable by pooling them into a homogeneous group, and coalesces the bad guys into one stereotypical class-based opposing force whose motivations are explained by words and not by actions. That leaves us with a grand total of 3 sloppily realised characters. This myopic technique of etching out characters and their dynamics instantly cripples the expanse of the story. The movie's constantly shifting tone does it no favours either.

While the storytelling is a dusty relic from a bygone era, intelligence remains as sexy now as it was then. Watching smart people handle complex situations with their wits instead of their fists is genuinely joyous. Be it the students coming up with novel solutions for their lack of resources or Anand Kumar's malleable morality when faced with keeping his dream alive, intelligent solutions will forever remain sexy. Any piece of art that captures the sheer satisfaction of conquering an obstacle with brains instead of brawns deserves a pat on the back.

Every film and TV show on the face of the earth has taught us that intelligence and someone incredibly sexy are extremely inaccessible to the common person. Reversing this conditioning requires a good performance from an actor who is dedicated to his/her role. Enter Hrithik Roshan. He may not be able to mask his posh South Bombay accent or hide his muscular frame well enough to make us believe that he is a modest teacher from middle India, but what he can do is make us buy an undercooked story hook, line and sinker. Even though he sticks out like an additional thumb in a sea of everyday people with everyday hands, his distinct looks give the space he occupies and the people he surrounds himself with an air of exceptionality.

On the other end of the moral spectrum is Pankaj Tripathi's corrupt education minister. With a disdain-filled laugh here and some broken English there, Tripathi brings layers to a limited role as only he can.

However, not all actors (and the characters written for them) were created equal, and hence the 30 students and the rich people coaching centre head honcho Lallan come off as caricatures. The students have every problem known to man, and Lallan has every vice listed in the Bible, the Quran and the Gita. They become placeholders instead of real people, and hence a sweet story of a man trying to do good teeters on the precipice of turning every hallowed cinema hall into a room teeming with hollow soundbites.

One soundbite that doesn't ring hollow even with the film's insistence on overusing it is a small Sanskrit poem echoing the importance of education. Those few lines trump every other carefully written lyric in the film's many unnecessary songs.

The songs and score feel unnecessary simply because they distract heavily from the story being told and rob precious time away from fleshing out Super 30's many characters. This, in turn, results in a loud score handholding an audience through every one of the movie's pivotal moments. Scenes filled with emotion and growth are never allowed to play for themselves as they don't come about organically. They are sequences of manufactured tension and triumph, and a by-product of this mode of filmmaking is an overused score.

With the film's writing, music and characters tussling about to no end, its smooth presentation slips by with little to no ceremony. A competently shot film that doesn't draw attention to it itself with choppy editing or broken continuity is a rarity in mainstream Bollywood, and we welcome it with open arms.

With all that being said, Super 30 reminds you of the approach a charitable organization's volunteer takes when pitching their charity to the average person. The volunteer introduces him/herself and the organization he/she is working for quite amiably. After a quick chat, the average person is presented with a choice. The person can choose to donate to the charity or walk away even after being presented with the picture of a child living under circumstances that are none too hospitable.

Choice one proves that one possesses humanity or good money to spare or both, and choice two proves that one has ice pumping through his/her veins. Secret option three gives one the opportunity to say that the average person has good thoughts to spare because talk is cheap whereas money is not.

Choosing a nuanced argument when given a simple choice is what we here at fullhyd do. Most of the fellow viewers in our theatre were too busy clapping and cheering when we were trying to make our minds up about Super 30. They made their choice very loud and very clear while we were twiddling our thumbs. We endorsed but we continue to speak.

P. S. If our math doesn't check out, please take solace in the fact that we didn't add one with one and call it eleven.
Share. Save. Connect.
Tweet
SUPER 30 SNAPSHOT 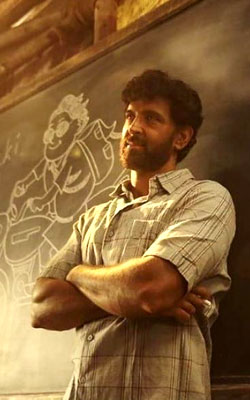 ADVERTISEMENT
This page was tagged for
what was the sanskrit sloak that use in super 30 movie
Super 30 hindi movie
Super 30 reviews
release date
Hrithik Roshan, Mrunal Thakur
Follow @fullhyderabad
Follow fullhyd.com on
About Hyderabad
The Hyderabad Community
Improve fullhyd.com
More
Our Other Local Guides
Our other sites
© Copyright 1999-2009 LRR Technologies (Hyderabad), Pvt Ltd. All rights reserved. fullhyd, fullhyderabad, Welcome To The Neighbourhood are trademarks of LRR Technologies (Hyderabad) Pvt Ltd. The textual, graphic, audio and audiovisual material in this site is protected by copyright law. You may not copy, distribute, or use this material except as necessary for your personal, non-commercial use. Any trademarks are the properties of their respective owners. More on Hyderabad, India. Jobs in Hyderabad.