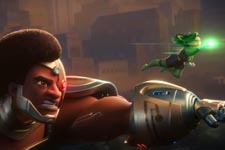 Punarvasu Pendse / fullhyd.com
EDITOR RATING
6.5
Performances
Script
Music/Soundtrack
Visuals
7.0
6.0
6.0
7.0
Suggestions
Can watch again
No
Good for kids
Yes
Good for dates
No
Wait for OTT
Yes
We'll start this review with a disclaimer: this reviewer has not been a huge fan of DC's offerings and their general approach towards superhero movies. Apart from a couple of the Batman movies, the first Wonder Woman movie and Shazam!, yours truly hasn't truly enjoyed any DC movie.

So it was with trepidation that I sat down to watch DC League Of Super-Pets, and honestly ended up being rather impressed by director Jared Stern. This is Stern's second movie as a director - he had previously helmed a rom-com for Netflix called Happy Anniversary. He also has writing credits in two animated features, including one by DC (The Lego Batman Movie) - this is not his first rodeo.

DC League Of Super-Pets opens with an interesting tidbit from Superman's famous origin story - the destruction of the planet Krypton - that baby Kal-El comes to earth with a dog named Krypto in tow. As adults, Superdog / Bark Kent (Dwayne Johnson) is the perfect sidekick to Superman / Clark Kent (John Krasinski) as they both fight crime and try to hide their alter-egos. Things are going along swimmingly until Clark Kent plans to marry his girlfriend Lois Lane (Olivia Wilde), and Krypto gets jealous.

You see, our Superdog doesn't have any friends apart from Supes, and his resentment towards Lois enables the villainous guinea pig Lulu (Kate McKinnon) to free her imprisoned owner, supervillain Lex Luthor (Marc Maron). It is now upto Krypto to help rescue the Justice League - with a little help from some reluctant acquaintances.

DC League Of Super-Pets is a pleasant surprise throughout its quickfire 105-minute running time. If the objective is to tell the story of the triumph of good over evil with some lessons about overcoming obstacles in between, it seems far better to tell it in a light-hearted way than to pester the viewer with self-important drivel. Let's just say that if given a choice between watching DC's Justice League and DC League Of Super-Pets, this reviewer, at the very least, will prefer the latter.

That is not to say that DC League Of Super-Pets is an innovative movie that sets the tone for stuff to follow - not at all. While it is the standard superhero tale of loss and redemption, it shines during its few emotional moments, ones that truly make any pet-owner (or animal lover) feel something. For example, there is a scene which shows Ace / Bat-Hound's (Kevin Hart) origin story that led to quite a few sniffles in the movie theatre (not something one would expect in a light-hearted animated DC movie). For all its slick action scenes and superhero antics, DC League Of Super-Pets is at its best when it wears its heart on its sleeve.

With a fantastic team-effort from a huge cast of talented voice artists that boast of quite a few big names, the "acting" is easily the strongest part of the movie. Ironically, it is the pairing of Dwayne Johnson and Kevin Hart, who are famous for having an easy "buddy movie" chemistry with each other as seen in Central Intelligence and the Jumanji movies, that is the weakest link. It seems that things like physical comedy and the big guy / little guy camaraderie are hard to achieve when both characters are similar-sized animated dogs. Finally, a special shout-out to Kate McKinnon for making a guinea pig look dastardly.

ADVERTISEMENT
This page was tagged for
DC League Of Super-Pets english movie
DC League Of Super-Pets reviews
release date
Dwayne Johnson, Kevin Hart
theatres list
Follow @fullhyderabad
Follow fullhyd.com on
About Hyderabad
The Hyderabad Community
Improve fullhyd.com
More
Our Other Local Guides
Our other sites
© Copyright 1999-2009 LRR Technologies (Hyderabad), Pvt Ltd. All rights reserved. fullhyd, fullhyderabad, Welcome To The Neighbourhood are trademarks of LRR Technologies (Hyderabad) Pvt Ltd. The textual, graphic, audio and audiovisual material in this site is protected by copyright law. You may not copy, distribute, or use this material except as necessary for your personal, non-commercial use. Any trademarks are the properties of their respective owners. More on Hyderabad, India. Jobs in Hyderabad.