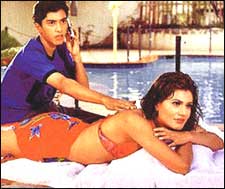 Kashif Ali / fullhyd.com
EDITOR RATING
1.0
Performances
Script
Music/Soundtrack
Visuals
NA
NA
NA
NA
Suggestions
Can watch again
NA
Good for kids
NA
Good for dates
NA
Wait for OTT
NA
Thing is…the kid wasn't smart enough. He allowed himself to be photographed while digging. And now he has to pay the photographer an amount that comes to a tight little crore. Now suppose we take this angle and try to figure out what happened, we'd probably come up with something in the region of pretentious.

That ain't the case, so lock the door and prepare the noose. Apparently the kid had sex with a lady who happened to be the fantasy at the end of the rainbow. And she died. This condition is called sexual murder according to Rocky (Rocky Sandhu). Rocky is the assistant/manager/master ka salt-eater/ham. More on him as the story takes an unexpected turn.

So Rocky, the man with expressions that remind one of spaghetti in its various stages of decay, is a gambler. He owes the trio of Amar, Akbar and Anthony 10 lakh rupees, who in turn work for the even more originally named Sultan bhai.

Who are they, you ask. Well… see… it's like this. The car had number plates made of paper with the numbers on 'em written with a marker. At this point the kid, let's call him Sunny (Amin Gazi), tells the wall that he likes to enjoy himself all alone. The wall has a photo of his dead mother… something I saw once I regained consciousness.

None of this seems to be making any sense. We didn't say it would. We just said the kid wasn't smart enough. Now Mohan Lal Sharma is as big and ridiculous as his disconnected name. He is also known as a business tie-con (as Sunny dearest put it… to the wall… again). He's also known to us Ayub Khan.

Sunny knows him as the father with the I-ain't-skanky-'nuff lady on his shoulder. On account of his mother being dead and all. So the father decides to go for a meeting/vacation/something. He signs some blank cheques, that being the only way to show his love for the begotten son.

While these soul-searing moments take the front seat, Rocky is busy trying to make sense of the world with Rubina/Ravina/Rabina. It's just the single woman with a name that changes every time Rocky changes his accent. R cube (Supriya Karnik) wants to be a star, opposite Shah Rukh Khan.

So, she goes about her dream by unleashing her acting talents and loathing of clothes that are bigger than their price tags, on the waiting male audience. She doesn't disappoint. Neither do the hecklers.

Meanwhile, Rocky traps Sunny (remember them blank cheques?) in the locks of bad acting, skimpy clothes and spasmatic lips, courtesy Payal (Payal Rohatgi) and her feminine overtures. Sunny being the way he is, rabid with them hormones all over the place, falls for Payal… bikini, lotion and lotion around bikini.

He gets jiggy with her one voyeuristic night and finds her dead on waking up. Too much of a man for her, one wonders. Well no, she didn't die; she's just a pawn in Rocky's dastardly plan of killing the audience with his acting.

He photographs Sunny digging Payal's grave, all worried and grunting. Makes you wonder about Rocky's private life, don't it? Anyway, using those photos as bait, Rocky weasels out the crore that he wants. It's a crore; the ten lakh were just there for the light comedy relief. He does so in installments of three cheques of 20 lakhs. That's how blackmailers work, math not being an issue with them. Payal has a change of heart and bikini size, remembers her sick boyfriend, sings a song with him and helps Sunny get his money back.

How that happens, with the help of scenes eviscerated from movies like Big Fat Liar and Home Alone, forms the lid of this coffin, which passes for a film. The women came, they showed, men whistled, we watched, we wrote. Two words - perverse suffering.