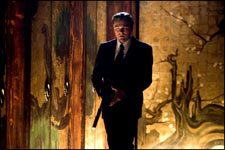 Samrat Sharma / fullhyd.com
EDITOR RATING
9.5
Performances
Script
Music/Soundtrack
Visuals
10.0
9.0
10.0
10.0
Suggestions
Can watch again
Yes
Good for kids
No
Good for dates
Yes
Wait for OTT
No
In making a film about the power of ideas - stealing them and preserving the essence of the truly good ones - Chris Nolan has also emerged triumphant is his execution of that idea. His ideas shape the film, and all his previous sub-textual elements, if you've been paying attention to his oeuvre, come together in a singular vision. It's such a cathartic experience watching this director hone his earlier strong points and exorcise past demons to create the one film that is the kind of film that can make a year special.

Freed from the shackles of fan boy appeasement, Nolan has delivered an action film that takes place entirely in the mind, and where the main antagonist are the demons that each character carries in his head. Where most of his earlier films had the emotional core as subtext, it is very rewarding to see a film where the emotions are part of the narrative fabric and dictate most of the on screen action.

This also defines the pacing of the film - I loved how the film is full of incident. If there isn't a completely nail biting action sequence on screen, there is a quiet moment where you get to know more about the characters. Some may view the exposition as examples of Nolan's cold and impersonal style of making films - but that couldn't be farther from the truth. He is very much interested in creating an emotional centre and understanding more of these people - the exposition isn't a long tirade, but comes in small sentences with plenty of visual cues peppered in between.

As Cobb (Leonardo DiCaprio), an experienced thief who specializes in stealing ideas and secrets from people's subconscious as they dream, tries to steal an idea from a powerful businessman Saito (Ken Watanabe), he unwittingly auditions for something Saito wants him to do. Saito wants him to instead plant an idea in the head of the heir of his business adversary. Most of the first part of the film is then Cobb assembling his team, which gives plenty of room for unravelling the rules of the dream world - and hence the heist - one by one, with plenty of interesting visual spectacle.

The visuals are the greatest strength of the film. Nolan is not interested in a big reveal or a major "gotcha!" moment. Rather, he asks us to follow him as he slowly reveals the film to us. The film is extremely rewarding to people paying attention and will reap major dividends when re-watching the film. The visual detail, explicit and subtle, is phenomenal.

What helps is Nolan's decision to physically shoot each scene. Almost all of the dream sequence is shot on location in real places, with a real camera crew, instead of a large green screen. This gives the film an immediacy - and helps establish the ground rules of dreams and reality. This also creates some of the most visually exciting and downright stunning action sequences committed to film, ever.

The zero gravity fight sequence will readily be compared to The Matrix, but it isn't as simple as that. The sequence uses a different visual language to punctuate it's action, and is easily the sort of highlight that can make you clap and blow whistles. In fact, this is true for most of the second half of the film.

The action goes deeper and deeper into different layers of dreams (dreams within dreams within dreams; within dreams even), and the sub conscious takes centre stage, and keeps on raising the stakes. As each level of dream state changes, the dream withing changes its rules, creating a dense layered action sequence that lasts a good part of an hour. It is the longest action sequence I have seen in recent times, and there is no fatigue - such heft does Nolan bring to the emotions behind the action.

Of course, the emotion is helped by the best actors in the business adding a third dimension to a straight up heist film. What could have been standard character tropes are brought to vivid life by these actors who add that little detail, and the tiniest of details in character moments that completely immerse you in these people's worlds and what they do. A roll call is unnecessary - everyone is so fantastic that there isn't the merest whiff of mediocrity.

In fact the film itself is that special - there isn't a wasted moment, or a run to the ground trope. Everything has its place in this world that Nolan has created, and for a film where losing control is the worst thing imaginable, the director is in complete control, and delivers the best film this year in an entertaining, visually stunning and beautifully realized vision. I'd watch this again in a heartbeat.
Share. Save. Connect.
Tweet
AARAMBHAM SNAPSHOT

ADVERTISEMENT
This page was tagged for
Aarambham telugu movie
Aarambham reviews
release date
Leonardo DiCaprio, Joseph Gordon-Levitt
theatres list
Follow @fullhyderabad
Follow fullhyd.com on
About Hyderabad
The Hyderabad Community
Improve fullhyd.com
More
Our Other Local Guides
Our other sites
© Copyright 1999-2009 LRR Technologies (Hyderabad), Pvt Ltd. All rights reserved. fullhyd, fullhyderabad, Welcome To The Neighbourhood are trademarks of LRR Technologies (Hyderabad) Pvt Ltd. The textual, graphic, audio and audiovisual material in this site is protected by copyright law. You may not copy, distribute, or use this material except as necessary for your personal, non-commercial use. Any trademarks are the properties of their respective owners. More on Hyderabad, India. Jobs in Hyderabad.