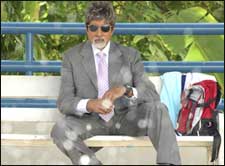 EDITOR RATING
6.0
Performances
Script
Music/Soundtrack
Visuals
NA
NA
NA
NA
Suggestions
Can watch again
NA
Good for kids
NA
Good for dates
NA
Wait to rent it
NA
The bags under the eyes are very real. The skin is sagging and porous with wear. The hair is streaked with obstinate lines of silver. The gait has a pronounced arch around the limbs. He looks 63 going on 75.

This man still rules Bollywood, and there seems no end in sight. Amen.

Prima facie, it would be hard to imagine Ek Ajnabee working – it has no heroine, no comedy, no songs, no novel script. What it has in it, however, is the man who can make all of those seem out of place. If the youth of Amitabh’s career was driven by the inability of audiences to see beyond his mere presence, the twilight shows you all that you missed when you went seeking the angry young man. The actor.

Ek Ajnabee does not have a script that needs a mature actor in his 60s in its lead role – it’s just another assembly-line action film. What saves it from being one, however, is the mature actor in his 60s. And to accommodate him, the script achieves subliminality. At least in your mind. Until someone asks you later how the film was, and you finally think.

Colonel Suryavir Singh (Amitabh Bachchan) is an ex-officer of the Indian Army, who has a rather tame flashback that spirals him into a serious drinking problem. All he did was mistakenly fire at two kids in an ambush operation, trying to save a member of his unit. I mean, what should George Bush do then?

Many years later, the person he saved, Shekhar (Arjun Rampal), calls him to Bangkok to work as the bodyguard for the 8-year-old daughter Anamika (Rucha Vaidya) of one of the richest businessmen in the city, Ravi Rathore. He’s old, but the Colonel, one of the best officers of the Army in his prime, is still able and sharp despite his drinking, and accepts the assignment.

The first half focuses exclusively on a bond building between the kid and her fiercely private bodyguard, and while this should normally have been the heart of the film, suffers due to too little footage and too few moments. Like we said, the bit about unknown fears from the Colonel’s past haunting him lacks depth completely, and looks more like an attempt to make the script intellectual at any cost than to be the raison d'etre for anything.

Anamika is eventually kidnapped despite her bodyguard’s ferocious attempt to save her – he takes down half a dozen men in the process – and then killed due to a mistake in dealing with the kidnappers. But the kidnappers make a big mistake in leaving her bodyguard alive, and the film plunges into the murky underbelly of Bangkok’s mafia as one of the best men of the Indian Army is on a personal mission to salvage his sanity and his soul.

While it’s an open secret that Bachchan can spill raw intensity and make you cry with him, it’s the kid who deserves special mention. Playing a prodigal girl, Rucha effuses acumen and warmth in equal measure, and makes the truncated character-building of the first half still work. Arjun Rampal’s is more a cameo than a full role, and he’s mostly eye-candy for the female crowds. Perizaad Zorabian, as the mother, delivers an impressive performance, too.

Ek Ajnabee will perhaps be a trend-setter in Bollywood for thriller films anchored by veterans, in the genre of Clint Eastwood, Harrison Ford or Sean Connery starrers. Bachchan hardly makes you feel the lack of a more youthful hero, or even a heroine, and is a draw all by himself. Though it’s hard to see anyone other than Bachchan being able to carry that off in Bollywood.

The film is also slickly presented like all Bollywood thriller stuff is these days, with Courier New fonts, sepia-and-tint gloss, lean dialogue and skid-street editing, which seems to make anything worth a watch. Which this one certainly is, at least for urban audiences.
Share. Save. Connect.
Tweet
EK AJNABEE SNAPSHOT

ADVERTISEMENT
This page was tagged for
Ek Ajnabee hindi movie
Ek Ajnabee reviews
release date
Amitabh Bachchan, Arjun Rampal
theatres list
Follow @fullhyderabad
Follow fullhyd.com on
About Hyderabad
The Hyderabad Community
Improve fullhyd.com
More
Our Other Local Guides
Our other sites
© Copyright 1999-2009 LRR Technologies (Hyderabad), Pvt Ltd. All rights reserved. fullhyd, fullhyderabad, Welcome To The Neighbourhood are trademarks of LRR Technologies (Hyderabad) Pvt Ltd. The textual, graphic, audio and audiovisual material in this site is protected by copyright law. You may not copy, distribute, or use this material except as necessary for your personal, non-commercial use. Any trademarks are the properties of their respective owners. More on Hyderabad, India. Jobs in Hyderabad.