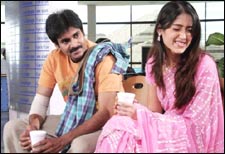 EDITOR RATING
7.0
Performances
Script
Music/Soundtrack
Visuals
NA
NA
NA
NA
Suggestions
Can watch again
NA
Good for kids
NA
Good for dates
NA
Wait for OTT
NA
A small good turn by fate can offset a disproportionately large amount of baggage from the past. For Pavan Kalyan, fate happens in the form of contemporary Telugu cinema's best writer Trivikram Srinivas. And the good turn is not small either - this is likely to be an impressive hit.

It will help forget a bad phase that never seemed to end, and it will do more. Pavan Kalyan is a superstar again, and even if baggage builds again, there's going to be no contribution from the pre-Jalsa part of his career. That is now forever irrelevant conversation, irrelevant thought. When you go downhill, people tend to see it only from the last peak, and in the period before that they remember only the peaks.

Jalsa is a Trivikram Srinivas product, which says more now than any other promotional material. He manages something that falls more in the realm of professionalism than of creativity - consistence. And given that he already produces reams of creativity, that's all the requirements for a solid brand in the film industry.

The film has all that you go looking for - great dialogues, great comedy, good songs, stirring fights, big stars and gloss all around. It makes you laugh out loud, it makes your blood surge and it makes you ponder ("bedirimpu arthamkavadaniki bhasha teliyakkaraledu"). The story is simple enough - Sanjay Sahu (Pavan Kalyan) is a student who makes big enemies when he rescues a couple of girls Jyotsna (Parvati Melton) and Bhagmati (Ileana) from some goons. The girls both fall in love, but the dominant Jyotsna loses out to the mousy Bhagmati.

The courtship is more entertaining than mushy - while the movie has a good bit of romance in its core, it doesn't stand out anywhere for that - and keeps the first half lively. Sunil and Dharmavarapu add to the laughs, but Ileana's featherbrain character does little for intellectual stimulation in the serenading - Bhumika was as big in Khushi as Pavan.

The second half sees the villian Damodar Reddy (Mukesh Rishi) getting more pro-active and things appearing to lose focus, but this being a Trivikram film, it's not all downhill into a morass of violence. Bhagmati breaks up with Sanjay over something and he re-woos her in more lighthearted scenes, and the fights are arresting, too. All fights in general are, except the climax one.

Pavan Kalyan is a star, and that brings its own inputs to the watchability of a film casting him. He puts in a decent performance, but the problems with fast-paced dialogue delivery continue. In the pre-interval diatribe on society and suffering, for example, it's can be tough to follow what he's saying, and you have to concentrate like you do in a Hollywood film.

Parvati Melton and Kamalinee Mukherjee have negligible roles, and so does Sivaji - it's a moot point what the latter two are doing in the film. Ditto with Ali. And Brahmanandam comes in with promise but fizzles out soon in an abridged version of a role you've seen him do before, this very year. Prakash Raj is his usual talented self.

The songs are already popular, especially the Baba Sehgal rendered title track, and Devisri Prasad delivers in style. It's easy to see them top the charts one after the other. This is a film intended for family audiences, and the songs are visually in that palette.

And the fights, while rich in gore, have you seizing up in anticipation and gritting in endorsement. The first fight is a particularly just payoff for your expectations, and another sequence where Damodar Reddy attacks a mafia don to grab land impresses in the thought behind it - how the former comes prepared for Plan B too.

Jalsa is on the whole a well-made and good-looking film, and will arguably rate a notch below Khushi in Pavan Kalyan's career. It lives up to monstrous expectations, and is worth the crusade for tickets.

Finally, there's someone interesting who does the narration. Someone very interesting.
Share. Save. Connect.
Tweet
JALSA SNAPSHOT

See Jalsa full details
TOP COMMENT
m_mrk on 14th May 2008, 11:35am | Permalink
keeping aside script and naxal part JALSA is a good entertainer. No one will feel bored after watching the movie. The main purpose of every movie is to entertain and this movie has done it.

Coming to movie Pawan did well and also illeana and other supporting characters.But the minus in this movie is NAXAl backgorund.The flash back starts seriously(unnecessarily also, even if you edit the flash back it wont affect the story) and ends funnily(meaning less end of the flash back ).Songs picturisation also not good.There are only few Trivikram trademark dialogues in the movie.

It is just a okay type movie but when compared to Pawan previous flops it is an above average movie.

I don't know why pawan changed his style after Khushi.Up to the Khushi all his movies are worth watching and i became die hard fan to him at that time.At that most of his movies are different to the other heroes regular type movies.But after Jhonny he also started to do same routine things like other big heroes.

This movie is good for time pass and dont compare with Khushi.

RaviKumar79 on 10th Jul 2008, 2:16pm | Permalink
The movie is a time pass movie. the chemistry between illena and pavan kalyan was good. soem songs were good to hear. overall its a one time watchable entertainer.
RATING
6
Kalyan Kumar on 30th Jun 2008, 5:01pm | Permalink
Though there is no story in the movie, it provides u da entertainment. And the music of movie is awesome. But the songs are not picturized well.
the_juggernaut on 3rd Jun 2008, 12:46pm | Permalink
Jalsa,probably the best movie released so far after Gamyam in this year.Full credit to pawan for making the film lively n colorful.Perfect timing supported by good dialogues makes this movie watchable.Music,comedy n fights r a bonus.Overall,its a nice entertainer with no twists,excessive fights n obscenity.People looking for a story n logic in it might get dissapointed.Overall a worth watching movie...!!

m_mrk on 14th May 2008, 11:35am | Permalink
keeping aside script and naxal part JALSA is a good entertainer. No one will feel bored after watching the movie. The main purpose of every movie is to entertain and this movie has done it.


Pros: Pawan Kalyan, Songs, Comedy
Cons:
RATING
10
bab on 2nd May 2008, 3:08pm | Permalink
one of the finest movies and clean entertainer. If a vulgar movie like krishna is hit then this movie will be an industry hit


Pros: pawan kalyan energetic performance. ileana, whole movie. comedy is the best
Cons: a little tight screenplay would have been better
RATING
10
pnp12345 on 28th Apr 2008, 1:09pm | Permalink
oka chetta cinema :)... Yesterday Ileana herself agreed that this movie is not going great in her interview on NDTV. OMG!! Pawan is a naxalite eating chicken burgers and Pizzas and then drinking in bars :)... wowwie a new concept and ground breaking script...

ADVERTISEMENT
This page was tagged for
jalsamovei.orm
jalsa movie review
jalsamovie.best
jalsa cenema
jalsa movie review in telugu
Follow @fullhyderabad
Follow fullhyd.com on
About Hyderabad
The Hyderabad Community
Improve fullhyd.com
More
Our Other Local Guides
Our other sites
© Copyright 1999-2009 LRR Technologies (Hyderabad), Pvt Ltd. All rights reserved. fullhyd, fullhyderabad, Welcome To The Neighbourhood are trademarks of LRR Technologies (Hyderabad) Pvt Ltd. The textual, graphic, audio and audiovisual material in this site is protected by copyright law. You may not copy, distribute, or use this material except as necessary for your personal, non-commercial use. Any trademarks are the properties of their respective owners. More on Hyderabad, India. Jobs in Hyderabad.