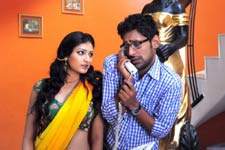 Fact is, Varun Sandesh movies nowadays are being hurtled at us with the frequency of the credit card statement, the phone bill, the gas bill, and certain other things that happen once a month. And they feel just as icky and depressing, and just like them, basically make you want to kill yourself.

Abbayi Class Ammayi Mass joins the growing list of these films, and lives up to the audiences' expectations of it. If it makes things any better, however, Varun Sandesh isn't the worst thing about it. The movie is fundamentally bad, right from the conceptual level.

Sri (Varun Sandesh) is an award-winning entrepreneur who breaks into a sweat whenever he's breathing the same air as a woman. He attracts the attention of Anjali, the daughter of a rich businessman (Ahuti Prasad), When Anjali confronts him, he runs away.

Meanwhile, Sri ruins THE MOMENT of his career when a prospective investor, a woman, asks him an important question. Anjali's father then swoops in, and offers to save Sri's sinking company if he marries Anjali, to which Sri agrees.

But Sri is supremely uncomfortable even in the presence of a woman. How, then, will he marry a "she"?

His friend, Rishikesh (Srinivas Reddy), hits upon an ingenious idea. Why not put Sri in the company of a hooker for 10 days until his wedding, so that he can get comfortable with girls? Sri agrees to this totally-not-asking-for-trouble idea, and thus enters Neeru (Hari Priya) into Sri's life.

Neeru is a high-maintenance prostitute who has very specific demands about her work. In her free time, she likes to bite her lower lip seductively, even when no one's looking.

Don't ask us the details, but before you know it, Sri and Neeru are doing their Tom & Jerry thing in a suite in Goa.

In Goa, too, Sri messes up his meeting again. And he hasn't even seen women in bikinis yet - these supposed femme fatales are in the conference room, fully clad in business suits.

But one night changes everything. That is, the night he pukes into Neeru's hand. He has had too much to drink, having spent his evening cursing his grandmother for having brought him up like this. As the doctor explains, "Raa (raw) thagaadu. Baaga hangover unnattundi". Insightful.

That night, Neeru tends to his health, playing the role of the perfect wife. In the morning, she even gives him a lecture before he leaves for work.

Transformed, Sri sees Neeru in a new light. The two now start having feelings for each other. After shopping for clothes in what suspiciously looks like a Kalamandir showroom (in Goa? Bad business sense), they start for Hyderabad in a cab, where they sit like a pair of Siamese twins and blush when the cab driver unwarrantedly, and for absolutely no reason, asks them to get married "quickly".

More toomfoolery follows, including a wedding and a shootout. In the end, we go back to the beginning. That is, with Sri searching for Neeru, who has just been released from jail. Why was she in jail? Why is he searching for her? Will they be united?

Abbayi Class Ammayi Mass is a poorly-written movie. There is no point to anything that goes on in the film, and logic has been murdered callously to string together a most unconvincing tale of rich-guy-falls-in-love-with-streetwalker.

While the premise itself has been inspired by Pretty Woman, there are blatant rip-offs of other movies as well, and even these are badly thought out and executed. The most striking example of this is the re-creation of Kahaani's Bob Biswas, a samosa-eating pot-bellied middle-aged "Haridas" who goes about shooting people who take his "courier". This guy technically has no place in a story like this, but oh boy, they make it happen.

The dialogues sound like spoofs, and the actors seem to know how cheesy they are. All the scenes seem contrived, without exception.

Hari Priya shows maturity in acting as a prostitute, and her dialogue delivery is quite alright. But her basic appearance and her make-up don't gel with the attempt to make her seem crude - her chief characteristic of "crudeness" seems to be a lack of table manners. That said, she's a pretty good actress who has enough screen presence to be one of the few things about the movie you remember after it is finished.

Varun Sandesh seems to have improved a bit, but he still has that backpack-toting-college-kid feel about him that makes you not want to take him seriously. Srinivas Reddy is funny. Ahuti Prasad, Sri Lakshmi, Ali, Dhanraj and others try to infuse some sense into the movie.

The cinematography is quite pleasing, with nice colours and wide-angled shots. Only, the over-zealous cameraman has a penchant to zoom in to everything, even if it's not pretty. The music is surprisingly very good, and the music director deserves much better films.

In all, avoid this film as best as you can.
Share. Save. Connect.
Tweet
ABBAI CLASS AMMAI MASS SNAPSHOT 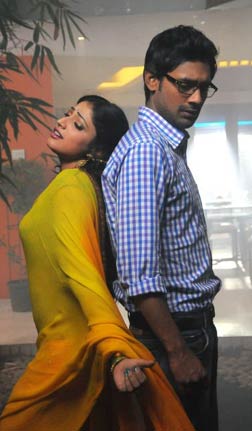 ADVERTISEMENT
This page was tagged for
Hyderabad Telugu ammayi bf full downloading
movie rolze
abbai mass ammi mass
Abbai class ammai mass rolze
Abbai Class Ammai Mass telugu movie
Follow @fullhyderabad
Follow fullhyd.com on
About Hyderabad
The Hyderabad Community
Improve fullhyd.com
More
Our Other Local Guides
Our other sites
© Copyright 1999-2009 LRR Technologies (Hyderabad), Pvt Ltd. All rights reserved. fullhyd, fullhyderabad, Welcome To The Neighbourhood are trademarks of LRR Technologies (Hyderabad) Pvt Ltd. The textual, graphic, audio and audiovisual material in this site is protected by copyright law. You may not copy, distribute, or use this material except as necessary for your personal, non-commercial use. Any trademarks are the properties of their respective owners. More on Hyderabad, India. Jobs in Hyderabad.