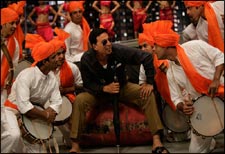 Deepa Garimella / fullhyd.com
EDITOR RATING
4.0
Performances
Script
Music/Soundtrack
Visuals
8.0
3.0
7.0
7.0
Suggestions
Can watch again
No
Good for kids
No
Good for dates
Yes
Wait for OTT
Yes
Sigh. The Priyadarshan-ness of it all.

Hidden beneath the screaming, the cussing, the hitting, the running, the murders, the rapes - the sheer loudness that is Khatta Meetha - is an anti-corruption flick that could have done far better. The comedy doesn't fall flat, but the decibel levels take away whatever the film has going for it.

It's a family of contractors and municipal officials, and Sachin Tichkule (Akshay Kumar), the son, is a road contractor whose career hasn't risen above being mediocre. He's the black sheep of the family, despite being a lot cleaner than his utterly despicable brothers-in-law, and that is because he doesn't bother to hide his sins.

These crooks, meanwhile, are the kinds who'd wash their hands off serious crimes of negligence like that of a bridge collapsing and taking busloads of people down with it - they push the blame onto their loyal family driver (Tinnu Anand), and even kill him.

Gehna Ganpula (Trisha Krishnan), an ex-girlfriend, walks in as the newly-appointed municipal commissioner of the town. Tichkule's conflicts with her, and the rest of the muck being raised with all the red tape all over, form the rest of the story.

Among the film's strengths is an unmistakable middle-class air, that keeps the characters and situations identifiable, especially the whole oppressive bureaucracy bit. But then, the movie's negatives keep catching up with its positives.

First up, this is a cluttered story, with no agenda. Priyadarshan tends to keep picking up fly-away threads of the story - for example, the sequence with the road roller - and stagnating with them.

Then, there's too much of incongruous villainy all over the place - you've come to this film to watch a comedy, and watching evil government officials and politicians shamelessly abetting in killing/raping innocents is not what you want as melodrama.

And despite certain well-written, genuinely funny lines, why Akshay has to scream his way throughout the flick is beyond comprehension. It's not as if the rest of the troupe is a quiet bunch - Asrani and Rajpal Yadav are but the weaklings in this shrieking marathon, and that is indeed something.

Still, Akshay brings the movie his trademark stardom, and it is comforting to have him around in this riot. Trisha is surprisingly inadequate, partly because her character isn't given much to do except put on around 2-3 stock expressions. A big disappointment, that.

The Priyadarshan regulars are mostly around, and they're made to do what they always do. Johnny Lever, however, has a knee-slapping cameo.

A couple of filmi song-and-dance sequences complete the show for Priyadarshan, who brings his standard production values into the visuals and the background settings.

Immensely skip-able, Khatta Meetha needs too many things for it to be right, but it's too late now.
Share. Save. Connect.
Tweet
KHATTA MEETHA SNAPSHOT

See Khatta Meetha full details
KHATTA MEETHA USER REVIEWS
1 - 1 OF 1 COMMENTS
POSITIVE  |  NEGATIVE |  NEWEST  |  OLDEST  |  MOST HELPFUL  |  LEAST HELPFUL
satish on 26th Jul 2010, 5:54pm | Permalink
the movie is good and akshay kumar acting is good but trisha not create any impact to attract the audience.but over all movie is good.

ADVERTISEMENT
This page was tagged for
khatta meetha movie in hindi
hindi film khatta meetha
Khatta Meetha hindi movie
Khatta Meetha reviews
release date
Follow @fullhyderabad
Follow fullhyd.com on
About Hyderabad
The Hyderabad Community
Improve fullhyd.com
More
Our Other Local Guides
Our other sites
© Copyright 1999-2009 LRR Technologies (Hyderabad), Pvt Ltd. All rights reserved. fullhyd, fullhyderabad, Welcome To The Neighbourhood are trademarks of LRR Technologies (Hyderabad) Pvt Ltd. The textual, graphic, audio and audiovisual material in this site is protected by copyright law. You may not copy, distribute, or use this material except as necessary for your personal, non-commercial use. Any trademarks are the properties of their respective owners. More on Hyderabad, India. Jobs in Hyderabad.