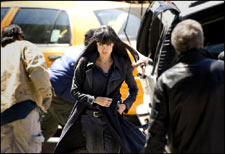 Deepa Garimella / fullhyd.com
EDITOR RATING
7.0
Performances
Script
Music/Soundtrack
Visuals
8.0
5.0
8.0
8.0
Suggestions
Can watch again
No
Good for kids
No
Good for dates
Yes
Wait for OTT
No
Salt is a crackling bundle of unlikely stunts and chases, in the midst of which there is one woman behaving like her body's made of high-tensile titanium. This Jolie caper carnival is on so much butt-kicking adrenaline that the plot is almost an accessory.

American intelligence and Russian espionage keep getting tossed about in the script, but revealing anything more would undo the whole experience. Evelyn Salt (Angelina Jolie) is a mysterious secret agent whose loyalties aren't entirely clear.

Throw in attempts at high-profile assassinations - of heads of state, and none less - and threats of nuclear attacks with twisted political aims, and you have a movie that's trying hard to build as much substance around the heroine as possible.

A spy story risks being either oversimplified or being ridden with so many convoluted twists it doesn't make sense. Salt dangerously veers towards being the latter, but you quickly realize it doesn't matter much.

There are no overwhelming surprises in the script - for example, when the moles keep crawling out of the woodwork and changing directions - but to its credit, at least some of the film's attempts to stay mysterious and intriguing do succeed.

And it's pretty clearly spelt out - Salt is meant to be all about the dodging and evasion, the muffled punches and kicks, the impossible leaps. And all that all over again. The action is a well-choreographed mix of calculated, dramatic and ridiculous, and it is this that keeps the flick alive.

Apart from Angeline Jolie, of course. Jolie is what the movie celebrates. It works the other way round, too, since the actress throws herself into the battle-field with barely believable energy levels. The plot twists involving her "deceptive" make-up demand a lot of explanations, but everything is hustled at a pace that makes those offensive little details seem unimportant.

The performances don't have problems, but basically, there's not a lot to emote about. Somehow, Chiwetel Ejiofor, who plays Peabody, the CIA agent most suspicious of Salt, is among the more captivating of the rest of the crew. Schrieber, meanwhile, mumbles away in a role that could have been much more.

Well, if you know what to expect, Salt doesn't under-deliver. And if you're as Jolie-struck as a lot of the world, you probably don't need too many other reasons to be game for a snappy chase out to nowhere.
Share. Save. Connect.
Tweet
SALT (TELUGU) SNAPSHOT

ADVERTISEMENT
This page was tagged for
Salt Telugu movie story
salt telugu movie review
salt 2021 telugu movie review
salt telugu full movie download
salt telugu movie download
Follow @fullhyderabad
Follow fullhyd.com on
About Hyderabad
The Hyderabad Community
Improve fullhyd.com
More
Our Other Local Guides
Our other sites
© Copyright 1999-2009 LRR Technologies (Hyderabad), Pvt Ltd. All rights reserved. fullhyd, fullhyderabad, Welcome To The Neighbourhood are trademarks of LRR Technologies (Hyderabad) Pvt Ltd. The textual, graphic, audio and audiovisual material in this site is protected by copyright law. You may not copy, distribute, or use this material except as necessary for your personal, non-commercial use. Any trademarks are the properties of their respective owners. More on Hyderabad, India. Jobs in Hyderabad.