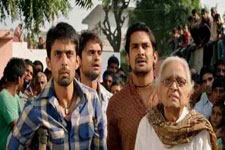 Nupur Barua / fullhyd.com
EDITOR RATING
4.0
Performances
Script
Music/Soundtrack
Visuals
6.0
4.0
4.0
5.0
Suggestions
Can watch again
No
Good for kids
No
Good for dates
Yes
Wait to rent it
No
In beauty pageants for all living creatures, men and women are judged on the basis of their physical appearances (generally), with maybe the additional test of intellect, sometimes. Buffalos, as we find out in Miss Tanakpur Haazir Ho, are assessed on how much milk they can provide within a specified time, and the quality of the milk. Which is why Tanakpur's headman, Saulal Gandas (Annu Kapoor), is in a celebratory mood - his buffalo is Miss Tanakpur, and that is no less prestigious than a Miss India title.

Saulal has a young wife named Maya (Hrishita Bhatt), a rather restless woman who cannot find solace in the arms of her husband. With uncharacteristic daring, she seduces Arjun (Rahul Bagga), a young man from the same village. Their romance is the stuff of novels, made more exciting because it is prohibited. But as they become more audacious, rumours begin to fly, embarrassing Saulal.

Catching the couple red-handed is imperative for Saulal to take action. When the lovers finally slip up, Arjun is given more than his share of a dressing down, and then it becomes necessary to punish him further. And that is how the young man finds himself brought to trial for rape. The victim? Not Maya, because, you know, social snubbing and all, but Miss Tanakpur. The argument - she is Miss Tanakpur!

Vinod Kapri insists that the story is based on true incidents, but we all know a satire when we see one, and this is what the movie really is. A commentary on the judicial system that oppresses the weak and makes the powerful invincible. Even well-meaning cops such as Matang Singh (Om Puri) cannot overpower the belief that the simple folk have in the fraudster village priest (Sanjay Mishra). Superstition overrides logic, and the result is a firm conviction in retaining a higher moral ground, no matter how ridiculous the rationale.

The director prefers to let broad generalisations and familiar stereotyping do the talking for the script. You understand that what you are exposed to is the social barbarianism of rural communities that neither are you a participant in, nor affects your existence. Gender and religion politics, the likes of which could put the Taliban to shame, are rampant here, and you as the outsider can only be horrified, maybe even sceptical. And let us not even get swayed into the argument of objectifying animals, since one presumes this is also a side-effect of fringe communities in our nation, and concentrate instead on the humour.

Of which there is quite a bit, but which is not as palatable as you think it would be. The overindulgence of slapstick kills the wit, and the movie becomes a series of inane and sometimes tasteless dialogues and actions that carry on forever. The setting is immediately familiar - a generic, albeit fictitious, village somewhere in North India where khaap panchayats thrive and rule. Ditto for the costumes. The language is a strange mix of various regional accents. The outrageous premise of the plot, which has a lot of promise, spirals downwards with alarming speed as it loses its way in its effort to be too clever. It becomes tiresome, and then some.

Annu Kapoor, Sanjay Mishra and Ravi Kissen have a blast doing whatever they are doing in the movie. They do not take themselves seriously at all, and are, more often than not, great fun to watch. They overdo their caricaturish roles at intervals, but they manage to be entertaining, if somewhat offensive. Om Puri is an actor par excellence, even when he plays a buffoon. As the henna-haired (and moustached) cop, he provides comic relief (in a not-as-funny-as-you-think comedy) with dignity. Hrishita Bhatt goes over the top a few times, and her enthusiasm can be slightly irritating. Rahul Bagga remains expressionless throughout the film, and does not manage to garner the sympathy that his character demands.

The music is disappointing, and the song sequences involve a whole lot of lecherous gyrations and mismatched steps. Although it is not a particularly lengthy film, the repetition in sequences make it seem longer, and the editing could have been stricter.

On a more positive note, it is wonderful that we can all laugh at ourselves, and even more magnificent that we are not ashamed to admit that we are quite stupid. Then again, our faults irritate us most when we see them in others, and Miss Tanakpur Haazir Ho does irritate. Maybe that was the intention of the director, and maybe you should check out what seems to be a rather tedious slice of rural Indian jingoism, just to give yourself a reality check (and come off your possible urban high horse).
Share. Save. Connect.
Tweet
MISS TANAKPUR HAAZIR HO SNAPSHOT 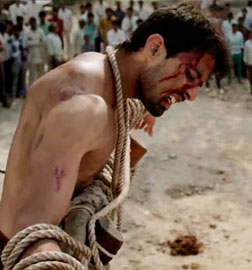 ADVERTISEMENT
This page was tagged for
miss tanakpur haazir ho full movie .com 9x movies
Miss Tanakpur Haazir Ho hindi movie
Miss Tanakpur Haazir Ho reviews
release date
Annu Kapoor, Hrishita Bhatt
Follow @fullhyderabad
Follow fullhyd.com on
About Hyderabad
The Hyderabad Community
Improve fullhyd.com
More
Our Other Local Guides
Our other sites
© Copyright 1999-2009 LRR Technologies (Hyderabad), Pvt Ltd. All rights reserved. fullhyd, fullhyderabad, Welcome To The Neighbourhood are trademarks of LRR Technologies (Hyderabad) Pvt Ltd. The textual, graphic, audio and audiovisual material in this site is protected by copyright law. You may not copy, distribute, or use this material except as necessary for your personal, non-commercial use. Any trademarks are the properties of their respective owners. More on Hyderabad, India. Jobs in Hyderabad.