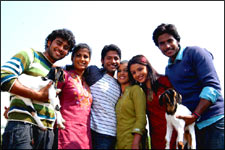 Deepa Garimella / fullhyd.com
EDITOR RATING
5.5
Performances
Script
Music/Soundtrack
Visuals
6.0
6.0
7.0
7.0
Suggestions
Can watch again
No
Good for kids
No
Good for dates
Yes
Wait for OTT
Yes
As an age group, the '20s of today are ridden with several convoluted personal battles - battles that are in constant danger of over-simplification by story-tellers. Snehageetam is a pleasant surprise, however, and doesn't shy away from sketching important details of some common issues that youngsters today face.

The film is being marketed as a product of the Happy Days genre, and that might lead you to go in expecting a wannabe, low-rent effort; which actually works in the movie's favour, since its maturity turns out to be a revelation.

Basically, Snehageetam deals with the inconveniences that are thrown your way when you're no more a carefree student. A usual, quintessential college gang is in its final years of engineering education, and is preparing to leave college. Thankfully, this bunch is not the filmi, over-ambitiously cocky kinds, nor does it have the utter wastrels that we have come to expect of a "youth flick" - each of them has real dreams like you or anyone you know.

The ones who're content with cracking their campus interviews are thrilled at their offer letters and the new life that lies ahead. However, you also have here an aspiring filmmaker whose dad finds his career plans ridiculous, and a brainy whizkid who wants to become an entrepreneur. Needless to say, their journeys are potholed.

Then, there are the love stories, with the gang conveniently consisting of 3 girls and 3 guys. One of the couples faces problems of jealousy plus a lecherous boss hitting on the girl, and the other two pairs have career issues to sort out before they can get hitched.

Snehageetam is a movie that smacks more of honesty in its intention than brilliance in execution. For example, you're likely to think of at least one of the stories in the flick as something that happened to you, but you might not exactly applaud at how dramatic it all feels, like, say, a Bommarillu might have made you. It is still a pretty person-next-door film, and not really an "aspirational marketing" kind of flick.

The characterizations and their dialogues are drawn from real life, and yet, are well-written. Some of the best parts come in towards the end, when one of the parents emotes on how she trusts her son to make the right choices for himself.

The performances by the lead cast range from amateur to sincere. Sandeep Kishan, who plays Arjun (the aspiring movie maker) was earlier seen in Prasthanam, and is pretty pleasant to watch. Among the other notable performances are those by Venky (Ravi, the entrepreneur) and Shreya Dhanwantary (Sailu, Ravi's girlfriend). Venumadhav leads a mildly funny comedy track of a college lecturer.

The soundtrack, at least one of its songs, has been on air for quite some time now, and is quite breezy. The film has been shot well, too.

In sum, Snehageetam may not the the mightiest cinematic effort ever made, but merits a watch because of its plain-heartedness.
Share. Save. Connect.
Tweet
SNEHA GEETAM SNAPSHOT

ADVERTISEMENT
This page was tagged for
Sneha Geetam telugu movie
Sneha Geetam reviews
release date
Sandeep Kishan, Chaitanya
theatres list
Follow @fullhyderabad
Follow fullhyd.com on
About Hyderabad
The Hyderabad Community
Improve fullhyd.com
More
Our Other Local Guides
Our other sites
© Copyright 1999-2009 LRR Technologies (Hyderabad), Pvt Ltd. All rights reserved. fullhyd, fullhyderabad, Welcome To The Neighbourhood are trademarks of LRR Technologies (Hyderabad) Pvt Ltd. The textual, graphic, audio and audiovisual material in this site is protected by copyright law. You may not copy, distribute, or use this material except as necessary for your personal, non-commercial use. Any trademarks are the properties of their respective owners. More on Hyderabad, India. Jobs in Hyderabad.