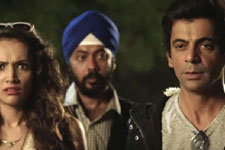 Ajay Kumar R / fullhyd.com
EDITOR RATING
3.5
Performances
Script
Music/Soundtrack
Visuals
4.0
3.0
3.0
4.0
Suggestions
Can watch again
No
Good for kids
No
Good for dates
No
Wait for OTT
No
Of course, India Wants To Know what happens when dreaded journo and machine gun mouthpiece Arnab Goswami and dreaded don-tycoon Dawood Ibrahim lock horns on prime time. But here, a variant of the Goswami species named Ghosh (terrible impersonation by the ever poker-faced Sunil Grover a.k.a. "Gutthi" from a Hindi comedy show) sets out to do the job. And he succeeds. Well, at least inside this inane reel world of Coffee With D.

Arnab Ghosh, an acclaimed, provocative and sharp journalist, loses his prime time slot after he makes a big politician weep on the sets, and is demoted to a one-hour anchoring slot in a culinary show by the boss (Rajesh Sharma) due to pressure from the politician's friends. Ghosh's job is given to his sleazy female colleague Neha (played by Dipannita Sharma).

Unhappy at the thought of losing his fame and fortune, he takes a cue from his crime-reporter wife Parull (portrayed by an overbearing Anjana Sukhani) and decides to do something monumental and earth-shaking to regain TRPs and save his career from extinction after the crying-politician fiasco on set. And that earth-shaking decision is nothing but a coffee date with Dawood (played by a funny yet annoying Zakir Hussain), who goes by the acronym "D".

By doing really silly things he somehow gains D's attention, and the latter agrees for an interview at his own premises in Pakistan. But the underworld kingpin has a hidden agenda/condition, and several lives and reputations are at stake. A series of witty and also dim-witted questionnaires and conversations are then marred by sloppy acting, inconsistent dialogue, a wafer-thin plot and shoddy direction.

It's surprising Cyrus Broacha wasn't considered to do a Goswami. The Week That Wasn't with its certified and witty news-comedian with an actual spoof-slot in a reputed channel would have done way better in interviewing D with his splendid comic timing, than the repetitive Comedy Nights supporting stage actor who mostly tickles only Sidhu and a laughtrack.

Yes, Sunil Grover is generally funny and did a decent job in Punjabi comedy film Vaisakhi. But he just isn't cut out for the big screen as his funnily self-depreciating and satirical persona (like Gutthi) has been lost somewhere in the transition from stage to celluloid, and turns into a rather clueless and underconfident debutante. His character doesn't scream "Arnab Goswami" (or like him) like it should have, giving you a dull affair and leaving the real Goswami - on behalf of the nation - wanting to know why such blasphemy has been committed in his name.

Apart from the obviously incorrect caricature of the bombastic demeanour of India's most renown media personality, CWD's version of D lacks substance and depth. Although Zakir Hussain's emoting is satisfying, the character development isn't layered enough. Little research seems to have gone into the person. If you are going to ask some "tough" questions of and decode a hated don in the hit list of nearly 10 nations, the scripting and the emoting need to be up to the challenge. Instead, director Vishal Mishra shows how he isn't interested in judging D and how he hates to offend the gang and the nation.

Other supporting actors aren't worth mentioning except maybe the person who plays D's close aide Giridhar. Dipannita Sharma's Neha is an objectified news reporter who has been declared the best writer in town by her boss only because she is attractive. Her character doesn't play any important part in the movie other than accompanying Ghosh to Pakistan.

And all hail Pahlaj Nihlani (or maybe the numerous death threats Mishra supposedly received from the gang) for giving us at least five censor bleeps in each of the sentences during the most important interview of Arnab's life. Why not just ban (or not release) the movie when you don't want the audience to understand what is going on?

Band Superbia's and Dhruv Bhalla's rhythms add neither gusto or tension to the comic-cum-serious (as intended) interview with D. And Anu Malik's compositions, although brilliant till the early 2000s, are slowly losing their relevance in contemporary music.

The cinematography (Anshul Chobey) does not help in rendering the movie as gritty and engaging as it should have been given the genre and the theme. And the editing (Banty Nagi) helps the weak dialogues mar the interaction between D and Goswami ...er, Ghosh.

No one in the sets other than Sunil Grover seems to have taken the motive of this flick seriously. We're thinking of Cyrus Broacha again.
Share. Save. Connect.
Tweet
COFFEE WITH D SNAPSHOT 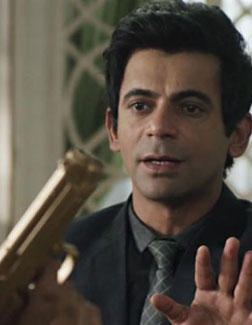 ADVERTISEMENT
This page was tagged for
coffee d movie in hindi movies
Coffee With D hindi movie
Coffee With D reviews
release date
Sunil Grover, Zakir Hussain
Follow @fullhyderabad
Follow fullhyd.com on
About Hyderabad
The Hyderabad Community
Improve fullhyd.com
More
Our Other Local Guides
Our other sites
© Copyright 1999-2009 LRR Technologies (Hyderabad), Pvt Ltd. All rights reserved. fullhyd, fullhyderabad, Welcome To The Neighbourhood are trademarks of LRR Technologies (Hyderabad) Pvt Ltd. The textual, graphic, audio and audiovisual material in this site is protected by copyright law. You may not copy, distribute, or use this material except as necessary for your personal, non-commercial use. Any trademarks are the properties of their respective owners. More on Hyderabad, India. Jobs in Hyderabad.