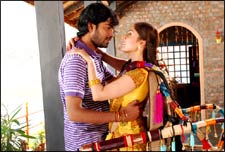 Deepa Garimella / fullhyd.com
EDITOR RATING
4.0
Performances
Script
Music/Soundtrack
Visuals
7.0
3.0
6.0
6.0
Suggestions
Can watch again
No
Good for kids
No
Good for dates
Yes
Wait for OTT
Yes
Fact remains that the man has built such an immortal body of work that he can make as many movies as he wants even when he's not connecting to his audience any more, and still get away with it. Indeed, it is respect towards K Viswanath's heyday that helps you endure this jerky journey called Subhapradam; like how you would indulge a senile grandparent who's going on and on on no particular topic.

First and foremost, Subhapradam is a scatter-brained movie. Its problem does not lie with its ideology, but with the fact that it is incoherent about it. The flick starts off behaving as though it is a music-themed story, moves on to "marriage & relationships" mode, then starts championing the dignity of labour, and ultimately, throws acid in your face.

Yes, it is that painful to watch it ramble without ever finishing a single topic it begins. And we were not completely kidding about the acid part.

Indu (Manjari Phadnis) falls for Chakri (Allari Naresh), just because the first time she sees him she thinks he's a talented singer when in fact he was lip-syncing to S P Balasubrahmaniam's Sankara naada sarira para playing in a music van on the road behind him.

And that is just the start of things to come.

After misleading amounts of tribute-paying to music and nature's sruti, including an enthusiastic cameo by S P Balasubrahmaniam, we're taken through the romance between Indu and Chakri. Then, reality strikes.

Indu's family members don't want Chakri to marry her because they think he's a wastrel. He, however, wins them over in a few months by telling them he's a changed man. Indu and Chakri get married and move to his home, which is when Indu is in for a few unpleasant surprises. Chakri, though clear-hearted, has lied to her about much of his life.

Still, she takes things in her stride, and much to her credit, their marriage starts glowing. Then, a well-wisher (Sarat Babu) Indu had met earlier in the movie walks into their life as a sick man in need of bedside tending. Indu serves him with incredible amounts of devotion, which irks Chakri - all he wants is some "alone time" with his wife in their one-room shack.

More drama and a flashback ensue, to let us know what really is up with some of the strangeness that is starting to surface in the movie, and a happily-ever-after ending finally closes the deal.

Clearly, the intent was to promote old-fashioned goodness - service to elders, an appreciation of fine arts, natural healing, honesty, selflessly helping the helpless, and a caution against materialism. The flick could serve to soothe certain sensibilities with its vintage stamp - in the mannerisms of characters, or in the dialogues and the subtlety of the humour.

And it would have been quite charming, if it wasn't so cluttered. The story starts off with being a disjoint set of scenes and character sketches. For example, the whole bit about the cross-culturalism of Indu's family doesn't make sense, and it doesn't even lead to anything important; it's just a prop, and a lousily-executed one at that. Plus, ideas are scattered even as the movie goes on, and classicism is force-fitted into the proceedings.

Well, much of the reason Subhapradam might stand a chance is its immensely watchable heroine. This is a heroine-centric flick, and Manjari Phadnis evidently has the kind of classic beauty that you'd find in most K Viswanath flicks.

Naresh doesn't have much work cut out, but as always, he's good at bringing his character to life. Plus, interestingly, it is he who provides the audience with some really identifiable emotions. The rest of the actors are limited mostly by the scenes they're given and the lines they're made to mouth.

As for the music, Manisarma has done better. A few of the songs - including a folk number and a couple of classical songs - are good, though.

We wouldn't recommend this as great cinema, but watch it if you can tolerate the extremes of mediocrity from a man who once delivered nothing less than excellence.
Share. Save. Connect.
Tweet
SUBHAPRADAM SNAPSHOT

ADVERTISEMENT
This page was tagged for
Subhapradam telugu movie
Subhapradam reviews
release date
Manjari Phadnis, Allari Naresh
theatres list
Follow @fullhyderabad
Follow fullhyd.com on
About Hyderabad
The Hyderabad Community
Improve fullhyd.com
More
Our Other Local Guides
Our other sites
© Copyright 1999-2009 LRR Technologies (Hyderabad), Pvt Ltd. All rights reserved. fullhyd, fullhyderabad, Welcome To The Neighbourhood are trademarks of LRR Technologies (Hyderabad) Pvt Ltd. The textual, graphic, audio and audiovisual material in this site is protected by copyright law. You may not copy, distribute, or use this material except as necessary for your personal, non-commercial use. Any trademarks are the properties of their respective owners. More on Hyderabad, India. Jobs in Hyderabad.