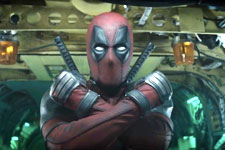 Kritika Deval / fullhyd.com
EDITOR RATING
8.5
Performances
Script
Music/Soundtrack
Visuals
8.0
9.0
9.0
9.0
Suggestions
Can watch again
Yes
Good for kids
No
Good for dates
No
Wait for OTT
No
So the whole thing starts with Deadpool (Ryan Reynolds) doing his thing, i. e. making people worse than him dead in ways that make you feel your mortality in visceral ways, when one of his opponents gets away. As this is still the beginning, you get the feeling that this miss is going to come back to bite our protagonist in the arse. You ignore the feeling, because this is Deadpool and any metaphors you might imagine could very well be taken quite literally by writers who seem to all have driven away the angels on their shoulders so they can join their personal demons in a drinking game.

It is Wade Wilson who then goes home to his fiancée Vanessa (Morena Baccarin) to spend their anniversary, where he gifts her a lead token from the gaming arena where they had their first date, while she in turn gifts him her IUD, which, as she patiently explains, is not an explosive device but her way of announcing her readiness to start a family.

As they spend their day being gross and sappy and shockingly romantic for all that, their idyll is broken up rather violently by the one who got away from the first scene who's found Wade's home along with some backup. While Wade kills all of them with myriad kitchen implements, one of them manages to kill Vanessa, which - wait, what?! They were just discussing baby names!

And so the opening credits roll to an audience that is in a state of bewilderment that chases them for the rest of the film.

The rest of the film has plot. Basically, Deadpool tries to kill himself by way of picturesque auto-explosion, only to be met by a barrier between himself and a spirit Vanessa, and a cryptic clue to surpassing it. Colossus (Stefan Kapi?i?) comes to literally pick up the pieces (example of metaphors taken literally), and takes him to X-Mansion, the residents of which include Negasonic Teenage Warhead (Brianna Hildebrand) and her girlfriend Yukio (Shioli Kutsuna).

Colossus is altogether magnificent, and, some banter and weirdness later, manages to convince Wade his place is with the X-Men. Soon, they are called on scene to subdue a teenaged Russel Collins, aka Firefist (Julian Dennison), with out of control powers and volatile emotions. This leads to Deadpool being very Deadpool and getting himself and Russel arrested and put in the Ice Box with their powers bound by a collar. Cable (Josh Brolin) turns up from the future to kill a young Firefist in revenge for the death of his family, and the rest of the film then becomes a struggle to protect Firefist from Cable as well as the darkness in his soul. All you need to really know going is that there are lots of people, and s**t goes down. In some cases, literally.

Schadenfreude, thy name is Deadpool.

This is a very standard superhero movie plot. That is all that is standard about it. If you've seen Deadpool, you'll know that plot isn't what this is about. This series is for the fans, those who've treasured special edition comics like they're gold, those who've bled and fought online in battles pretending to be discussions, those who are understandably peeved whenever their favourite nutjobs are unduly sanitised to be made suitable for their kids when they are the ones that are more excited about it. If you've seen the first part, you'll also know to take the 'A' rating really f***ing seriously.

There's all kinds of shocking crassness going on here that regularly drags laughter out of you with the same sudden violence displayed by the latest body to disintegrate into its constituent components. A bit where Ryan Reynolds does his variation of Sharon Stone in Basic Instinct had this writer wishing to scratch her eyes out. There's also lots of death - people getting blown up and hacked into prices and turned into squelchy mush that looks like Hannibal had diarrhea. It's all very exhilarating, this sudden awareness that you have of the fact of your existence and how very breakable the shell is that keeps you you. You are never bored, you're always going from one strong emotion to another, and, if you're older than 25, you're getting constant fistbumps from across the fourth wall that make you feel so, so good about that fact that you're getting old.

Ryan Reynolds has so much energy and does such an even better job embodying the subversive quality and sheer bloody-mindedness of his character now that he has a hand in the writing of it. Zazie Beetz is utterly brilliant as Domino, a superhero whose power is luck, which Wade vehemently denies is a power at all, even as the entire universe twists and tumbles to her benefit in entirely adrenaline-pumping ways. Morena Baccarin is so good that you leave the theatre with an impression far more substantial than the amount of time she spends on screen. Julian Dennison, Karan Soni, Brianna Hildebrand and many others form an ensemble cast that demonstrates how great acting comes from better writing.

The movie looks fantastic. It's how you imagine walking into a comic book would look like. The aptly named Weasel (T J Miller, who we have no trouble believing got arrested for taking a bomb threat) runs a bar that is almost poetic in its shadiness. The CGI that makes up Colossus is a true work of art.

The music is all mood and nostalgia, and will have you looking up your old playlists only to find that your brain is now accompanying them to images of murder and mayhem.

Deadpool 2 is a lot of fun if you're going in with a clear idea of what you're getting. It is most definitely not a regular superhero movie. It is about clichés and crassness and a story that is so self-aware that most attempts at deconstruction happen within the movie. It is about a redemption that points to how ridiculous redemption it is when it's built on a mountain of death. It is about a genre that an entire generation has spent a great deal of effort obsessing over. 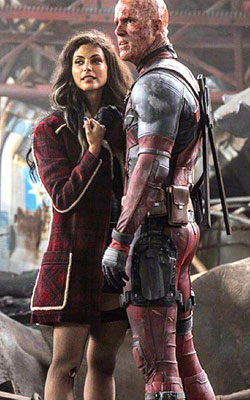 ADVERTISEMENT
This page was tagged for
deadpool (english) movies
deadpool english telugu movie
Deadpool 2 english movie
Deadpool 2 reviews
release date
Follow @fullhyderabad
Follow fullhyd.com on
About Hyderabad
The Hyderabad Community
Improve fullhyd.com
More
Our Other Local Guides
Our other sites
© Copyright 1999-2009 LRR Technologies (Hyderabad), Pvt Ltd. All rights reserved. fullhyd, fullhyderabad, Welcome To The Neighbourhood are trademarks of LRR Technologies (Hyderabad) Pvt Ltd. The textual, graphic, audio and audiovisual material in this site is protected by copyright law. You may not copy, distribute, or use this material except as necessary for your personal, non-commercial use. Any trademarks are the properties of their respective owners. More on Hyderabad, India. Jobs in Hyderabad.