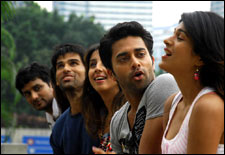 Ramanaidu isn't too far off the mark - he is just what the doctor ordered for quite a few of Mugguru's cast. Navdeep, at least, sure needed a Suresh Productions movie, however mediocre-budgeted, to salvage a cripplingly stagnant career.

Mugguru is a lot like a typical Allari Naresh movie, featuring a bunch of friends conning their way through life. It doesn't match up to the sheer wit of an Allari Naresh flick, but it's on its way there.

Navdeep (whose talent, good looks, and on-screen enthusiasm never seem to explain why he didn't make it big in Telugu cinema), Avasarala Srinivas (who's a few films old but definitely deserving of good comedy projects) and Rahul (who still has a problem with his diction but shows promise) play 3 wastrels who have no education, no ethics, no jobs, and no qualms about their collective aim in life - to get super-rich quick.

They bluff their way into the heart of millionaire JP (Ahuti Prasad), who now wants to give them high-paying jobs in his Malaysian firm and also get his 3 staggeringly stupid daughters married to them.

JP has an employee (Ali) who himself is vying for the son-in-law post, and who, when he has to welcome the trio in Malaysia, is shocked at the kind of tramps they really are. JP thinks they are gold, though.

There are no two ways to say this - Mugguru's plot is atrociously hare-brained. The plot flows just because the script-writers make it, and doesn't have any logic backing it. The heroines are painfully stupid, and their romances even more so.

Moreover, the 3 leading characters never seem to undergo any sort of real redemption, leaving no room for emotional warmth towards the story (as opposed to an Allari Naresh theme, which usually features "slapstick emotion" that swings between black and white).

However, there are some well-done comedy scenes, and the cast is good. There are also some scenes that have been well-conceptualized, visually. In addition, the dialogues are quite funny, reflecting a very "common man" kind of humour.

The humour is a little sleazy in places (and we don't know how the middle finger keeps getting past the censors these days) but there's rarely an empty, laugh-less sequence.

The boys don't really need an Ali or a Brahmanandam to breathe life into their scenes. Navdeep is quite good - he lives his part, and is extremely savvy with his lines. Srinivas and Rahul end up merely as props to Navdeep, with Rahul being given the least screen-space. Srinivas, though, deserves more flicks.

Then, there's Ramesh (who is famous as the drunkard from the Ala Modalaindi wedding sequence), who holds great promise. Ahuti Prasad, Ali and Brahmanandam do their usual thing.

The women, however, are in this for the skin show. They have terrible lip-sync, and some of them aren't even mouthing their lines in Telugu. Reema Sen looks extremely jaded.

Koti's music is as mindless as the movie is - no real tunes there. The title sequence, with Mano singing the credits as they appear, is completely weird.

The film's overall budget seems to have been low, but that doesn't hurt the movie. In fact, where the set design demands simplicity, like on Vizag's streets, the trio's bachelor pad, or in the village wedding sequence, the film is bang on.

Mugguru deserves a chance, but only if you've run out of movie options. And only if there are no kids or grandparents around.
Share. Save. Connect.
Tweet
MUGGURU SNAPSHOT

ADVERTISEMENT
This page was tagged for
Mugguru telugu movie
Mugguru reviews
release date
Navdeep, Rahul
theatres list
Follow @fullhyderabad
Follow fullhyd.com on
About Hyderabad
The Hyderabad Community
Improve fullhyd.com
More
Our Other Local Guides
Our other sites
© Copyright 1999-2009 LRR Technologies (Hyderabad), Pvt Ltd. All rights reserved. fullhyd, fullhyderabad, Welcome To The Neighbourhood are trademarks of LRR Technologies (Hyderabad) Pvt Ltd. The textual, graphic, audio and audiovisual material in this site is protected by copyright law. You may not copy, distribute, or use this material except as necessary for your personal, non-commercial use. Any trademarks are the properties of their respective owners. More on Hyderabad, India. Jobs in Hyderabad.