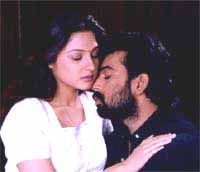 Arpan Panicker / fullhyd.com
EDITOR RATING
6.0
Performances
Script
Music/Soundtrack
Visuals
NA
NA
NA
NA
Suggestions
Can watch again
NA
Good for kids
NA
Good for dates
NA
Wait to rent it
NA
Ever thought of the names of all these boy-stuck-in-underworld-struggle movies? Shiva, Satya, Durga? all toughie. The hero, though harmless looking, has a really macho name to fall back upon. Maybe there indeed is something in a name!

The movie announces, "Where Satya ends, Durga begins". And though Durga does not have the touch of class that Ram Gopal Verma imparted to Satya, it is a statement in its own right. With a hero who's kind of perfecting the angry-young-man role, a heroine who is pretty and manages to act as a bonus, and a cast that looks tough-as-nails portraying some of the roughest elements in Mumbai, this movie has a lot going for it.

The story is pretty straightforward. Durga (Chakravarthy), a college student, falls in love with Gayatri (Priyanka), and after a few initial wrinkles, their love story starts running smoothly.

The backdrop is formed by the power struggle between dons Ramdas (Jai Prakash) and Bhushan Thapa (Shayaji Shinde) - or rather their respective brothers and gangs - as both the bhais enter the fray only after the interval. The gang wars show a certain rather "rubber" hand being abused every time there is some violence to be portrayed. First it is bent - a man screams because his finger has been "broken". Then it is stabbed with a pen - another scream. And finally it is run through one of those machines used to squeeze sugarcanes (dunno about the man whose hand it was supposed to be, but a few in the audience sure screamed!).

Parallel lines converge as the gang dispute and Durga's love life intersect. The girl's dad, Shivaji Rao (Anjan Shrivastav), disapproves of Durga. The Thapa gang that uses Shivaji Rao's theater as a hangout comes to know of this, and so they send a few guys to teach Durga a lesson. Durga retaliates when hit and beats up the entire bunch but one, and this "but one" stabs Durga with a broken bottle.

And then it's discovered that Durga is Ramdas' son.

The cast does a good job with Jai Prakash and Shinde looking suitably formidable as the two dons. Chakravarthy as Durga looks like he is getting used to these roles. Priyanka is definitely a find. With a cute visage and the ability to act when requires, she manages to balance the fine line between acting and looking good.

In spite of a stale storyline, the flick manages to impress as it tries to portray the futility of violence, and does a pretty good job. The songs are distracting and this movie would have been much better off without them. With tight direction and well-choreographed action sequences, the audience stays put right to the end. Though the message the movie seems to convey is "To put a stop to violence, you need to beat up all the gangsters first", it has the right intention.
Share. Save. Connect.
Tweet
DURGA SNAPSHOT

ADVERTISEMENT
This page was tagged for
durga.movie.j.d.chakravarthy
durfga 2002 movie in Hindi download
online free j.d. chakravarthy durga 2002 hindi full movie
jd chakravarthy Durga movies in hindi download
How to download Durga 2002 movie download
Follow @fullhyderabad
Follow fullhyd.com on
About Hyderabad
The Hyderabad Community
Improve fullhyd.com
More
Our Other Local Guides
Our other sites
© Copyright 1999-2009 LRR Technologies (Hyderabad), Pvt Ltd. All rights reserved. fullhyd, fullhyderabad, Welcome To The Neighbourhood are trademarks of LRR Technologies (Hyderabad) Pvt Ltd. The textual, graphic, audio and audiovisual material in this site is protected by copyright law. You may not copy, distribute, or use this material except as necessary for your personal, non-commercial use. Any trademarks are the properties of their respective owners. More on Hyderabad, India. Jobs in Hyderabad.