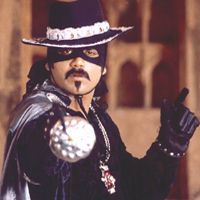 EDITOR RATING
6.0
Performances
Script
Music/Soundtrack
Visuals
NA
NA
NA
NA
Suggestions
Can watch again
NA
Good for kids
NA
Good for dates
NA
Wait to rent it
NA
Whoops! That ain't no moustached Zorro! It's our very own Nagarjuna, back to the action genre. And this time it is his turn to take on the might of the ISI juggernaut that is out to destroy the country. And we must say that Telugu movie-makers make it all seem pretty easy. Quashing the ISI, that is. Wonder what the Indian army would say if they saw the spate of Telugu movies in recent times that have the ISI defeated nearly single-handedly. Not one action film has been made recently without making it the destabilising force. Even dubbed films like Police Commissioner Narasimhanaidu harp on the same beaten theme. Well, at least the politicians and policemen - the favorite villians - are getting a break!

Aazad's plot is a direct lift from Main Azaad Hoon, which in turn is a copy of Frank Capra's 1941 film Meet John Doe. The original, a simple film that showcases the degradation of moral values, has been stretched into an action thriller in Telugu. Soundarya, a photo-journalist, is perturbed over the ever-growing violence spawned by Raghuvaran. As president of Hindu Seva Samiti, a frontal organization for his ISI activities, Raghuvaran has his hand in every nefarious activity in the city.

The activist-journalist Soundarya, who is groping for a solution, gets a brilliant idea when Deva's brother dies in a freak accident trying to molest her in the middle of the night. Deciding to sensationalise the incident, she writes a letter under an imaginary name Azad claiming responsibility for the death of Deva's brother. There is commotion in the city as Soundarya dashes off similar letters and strikes terror in the perpetrators of foul deeds.

Meanwhile, Nagarjuna (Azad, like you've guessed by now if you're a religious enough Telugu film-goer, happens to be his name in the film) comes to the city to claim some money from a chit fund company to marry his sister. In a series of hilarious foul-ups, he becomes responsible in getting rid of the bombs planted by Raghuvaran's men. Like the people, Raghuvaran believe that there is indeed an Azad who is out to foil his evil designs. Soundarya, who is rescued by Nagarjuna, convinces him to pour life into her imaginary character. The challenge is taken, and it is gore, gore all the way.

The film starts off on a good note but soon gets caught in the ISI cliché. You get to see the best of Raghuvaran as the destabiliser par excellence. After a long time he has displayed his villianish histrionics to the brim in a Telugu film. Credit should also go to Nagarjuna who has put in a good performance in an action role, his forte. Soundarya is also okay as the activist journalist. Then there is Shilpa Shetty with her sizzling beauty to thrill you in her micro minis.

The songs are okay and the relevant photography serves the purpose of heightening the sometimes murky and often bright atmosphere of the film.
Share. Save. Connect.
Tweet
AAZAD SNAPSHOT

ADVERTISEMENT
This page was tagged for
Aazad move Telugu
Aazad telugu movie
Aazad reviews
release date
Nagarjuna, Raghuvaran
Follow @fullhyderabad
Follow fullhyd.com on
About Hyderabad
The Hyderabad Community
Improve fullhyd.com
More
Our Other Local Guides
Our other sites
© Copyright 1999-2009 LRR Technologies (Hyderabad), Pvt Ltd. All rights reserved. fullhyd, fullhyderabad, Welcome To The Neighbourhood are trademarks of LRR Technologies (Hyderabad) Pvt Ltd. The textual, graphic, audio and audiovisual material in this site is protected by copyright law. You may not copy, distribute, or use this material except as necessary for your personal, non-commercial use. Any trademarks are the properties of their respective owners. More on Hyderabad, India. Jobs in Hyderabad.