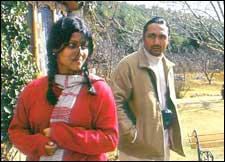 Priyanka Pulla / fullhyd.com
EDITOR RATING
7.5
Performances
Script
Music/Soundtrack
Visuals
NA
NA
NA
NA
Suggestions
Can watch again
NA
Good for kids
NA
Good for dates
NA
Wait to rent it
NA
For all its prosaic sounding dialogue, and sometimes exaggerated acting by most of the cast during the introductory scenes, 15 Park Avenue makes bleeding cuts in your sensibility when the intensity sets in. The script so brilliantly broaches every aspect of schizophrenia, that the all-consuming nature of the scenes depicted yanks up the performance of the entire cast, by default. It is a clear case of script winning over all else, and the actors seem like they cannot help but rise to the challenge.

Aparna Sen has been clever. With an audience widely ignorant about schizophrenia, she hasn’t bored as much into the depth of the subjects as she has covered the breadth, stroking her brush wide, using a large canvas. And so Mithali (Konkona Sen), a patient of schizophrenia, is really a poster schizophrenic – showing rather typical symptoms, but exhaustively so.

Whereas A Beautiful Mind is an unbroken journey into the schizophrenic’s mind, 15 Park Avenue is the diseased mind in relief. In and out of the indisposed mind the script goes, with outsiders observing it, discussing it, commenting on it and formulating their responses to it. The movie is like a primer for those who are seeing schizophrenia the first time. In that respect, 15 Park Avenue is a brilliantly accessible movie.

The story begins with Mithali and her constant needs and demands, and her elder half-sister Anjali’s unselfish caring for her. Waheeda Rehman plays the harried mother with ease – all it requires is a permanent furrow on the forehead. This initial part of the movie does not have brilliant performances from anyone except Shabana Azmi, Waheeda Rehman and Kanwaljeet Singh who come across as seasoned actors.

Konkona Sen somehow looks more like she is imitating a schizophrenic rather than being one. She does not slip completely into the role. However, it is easy to imagine the frail, vulnerable girl she plays, constantly looking for support and reassurance. While skipping jobs whimsically, she only seeks to be married and settled down with Joydeep (Rahul Bose), and that is the only thing that motivates her.

In her quest for that, she lands up at a remote village to interview people about post-election violence and gets brutally gang-raped. Her slide from a dormant, genetic propensity for a disease, to a manifest one is attributed to the rape. The scene itself is not gory and graphic as much as it is evocative. Through screams, and implied actions, it manages to make one nauseously discomfited.

When Jojo or Joydeep finds his beloved Meethi/Mitali in the hospital bed, ripped and bruised all over, he recoils instinctively. The man who till now was confident of being by her side no matter what, despite warnings of her condition, slips away with barely a letter of explanation.

Many years later, Jojo and Meethi meet again. In Bhutan on a holiday. Jojo is married now, with two adorable kids and a ‘healthy’ wife, while Meethi has disintegrated into someone who lives in a completely delusional world where Jojo is her husband, where she has five children, and where she lives on an imaginary 15 Park Avenue.

She does not recognize Jojo, and as is his fate, Jojo follows her, racked with guilt. He establishes his own agenda of helping her find the address she never can. Meanwhile Anjali’s life is far from settling-down because she spends every waking hour caring for Mithali and keeping her job as a professor of Physics. Her love life with Kanwaljeet Singh is in shambles, as a new one is blossoming with Mithali’s considerate new psychiatrist Kunal.

It is the wayward progression of 15 Park Avenue that gives it the wistful, twilight feel: the way the story is not leading to a conclusion, the way neither Jojo, nor Anjali, nor, more than anyone, Mithali will ever find utopia. Mithali will never find 15 Park Avenue, and Anjali cannot let her live with her delusions. Jojo is torn between his family and the completely unexpected course another life has taken while he wasn’t looking. Only Kunal, the psychiatrist seems to walk firm ground. His answers cut through like a harsh and bright sunray piercing thick clouds.

15 Park Avenue ends uncomfortably, leaving feelings of abrupt loss, and you are staring at the screen with glazed eyes and the half curl of a smile on the corner of your lips. The Meethi you have grown to love is last seen blithe and jubilant, but the rest of the people have lost her. You share her ecstasy through your tears but you wonder who won. You want her back but you know she is in the only place where she truly belongs – in the world of her own making.

ADVERTISEMENT
This page was tagged for
15 park avenue movie
15 Park Avenue psychological report
15 Park Avenue english movie
15 Park Avenue reviews
release date
Follow @fullhyderabad
Follow fullhyd.com on
About Hyderabad
The Hyderabad Community
Improve fullhyd.com
More
Our Other Local Guides
Our other sites
© Copyright 1999-2009 LRR Technologies (Hyderabad), Pvt Ltd. All rights reserved. fullhyd, fullhyderabad, Welcome To The Neighbourhood are trademarks of LRR Technologies (Hyderabad) Pvt Ltd. The textual, graphic, audio and audiovisual material in this site is protected by copyright law. You may not copy, distribute, or use this material except as necessary for your personal, non-commercial use. Any trademarks are the properties of their respective owners. More on Hyderabad, India. Jobs in Hyderabad.