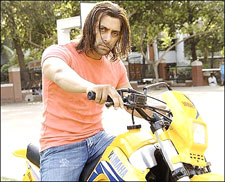 Neha Mathur / fullhyd.com
EDITOR RATING
3.0
Performances
Script
Music/Soundtrack
Visuals
NA
NA
NA
NA
Suggestions
Can watch again
NA
Good for kids
NA
Good for dates
NA
Wait for OTT
NA
A man who talks to God. A God who narrates the blighted futures of other people to this man. A man who has several questions and a God who doesn't give any answers, just death sentences. Saawan Kumar's Saawan attempts to portray a debate between destiny and coincidence, the supernatural and the practical. Which of these runs the universe? Do humans have a choice or are their lives pre-destined?

Saawan is about a man (Salman Khan) who talks to God. And he isn't pompous about this whole routine of being the "chosen one". If anything, he's kinda pissed off with the Creator. Chafing under the loss of his beloved, he is pretty dismissive of the Almighty, to the extent of trying to intimidate God with his threats.

And this is perhaps the only tolerable part of Saawan - Salman's intimate tete-a-tetes with God are rather entertaining. Take those out, and you're wondering how a film like this came out of the stable of the same man that created Sanam Bewafaa and Saajan Bina Suhagan. It lacks any of the deft handling of emotions that he's famous for, it lacks the music, and worse, it lacks Salman Khan too - he enters a few minutes before the second half.

Let's tackle the story first. The film kicks off with a young, pretty Kaajal (Saloni Aswani) in itty-bitty skirts, dancing to the tunes of love. This advertising of her coming of age has the desired effect, and in a jiffy Raj (Kapil Jhaveri) follows her around with his tail wagging vigorously. The inevitable follows - Kaajal starts off by snubbing the hapless Raj, and the courtship is a string of ludicrous bets and demands made by the juvenile heroine before she gives in.

In all this, Saawan Kumar forgets whose movie this is. Yes, Salman Khan enters a long way into this romance between 2 Bollywood unknowns, about an hour into the film. The hall reveberates with happy claps and thrilled hoots as he enters, for Hyderabad is Salman territory. In the movie, though, Salman, has run out of steam - he looks positively weather-beaten - and can only wave his clenched fist at the sky in frustration. To put it simply, he wants out, and the film revolves around his death wish.

Salman and Kaajal bump into each other after he rescues the girl from becoming squish under an automobile. Then Salman, who can see the future thanks to his special powers, tells Kaajal that her father is going to die that very night. And when it actually happens, Kaajal believes him completely, and asks about her own future. When he ventures to find out, his relation with God hits rock bottom - for she is to die in just two days.

While Salman is cursing Jehovah for always serving up bad news, Kaajal quickly reconciles herself to the fact, and has just one wish - she wants to die "a complete woman". If you are unfamiliar with such demure phraseology, she basically does not want to die a virgin. What ensues is a long song and a lot of play before her death.

On D-day, Kaajal is shot and critically injured. Raj, being the maddened lover, rushes to beat up Salman - twisted as fate is, Salman's death wish arrives in the form of Raj.

Kaajal dies, and so does Salman. But wait up - Sallu's death is inextricably linked to Kaajal's life, and there's a twist. Kaajal has a near-death experience but survives.

There's a lot of Sun City and Dubai you get to see in the film, but then that should be no reason to go watch a movie. For Salman fans, his cavalier attitude as if he couldn't care less, even though aware that he is a puppet in God's hands, is the reason to watch this one, even if it isn't amongst his best performances. What's fascinating is that sometimes you get the vague feeling that Salman's callousness is almost real, larger than the film itself.

Saloni laughs a lot, but is tolerable, while Kapil Jhaveri is really just another guy. The Johnny Lever - Bobby Darling pairing is meant to be quirky, but fails miserably.

The music by Aadesh Shrivastava is mundane, though you might want to catch the belly dancers jiggling away. Apart from the title track 'Saawan', the rest are nondescript numbers.

Saawan attempts to figure out why things happen the way they do, and if God's word is final. The intention is genuine, but the film fails because firstly, the romancing goes on for too long. More importantly, the issue of predestination and free choice is merely portrayed, not delved into. The nuances possible with such esoteric things as the linkages between God, man and fate are ignored entirely.

On the whole, Saawan is a movie for the die-hard Salman fan, and unfortunately, the number of those might get affected with this.
Share. Save. Connect.
Tweet
SAAWAN - THE LOVE... SNAPSHOT
SAAWAN - THE LOVE SEASON SNAPSHOT

ADVERTISEMENT
This page was tagged for
Still From The Film Saawan - The Love Season
sawan the love season movie wath
Sawan Salman Khan ki movie
Saawan - The Love Season hindi movie
Saawan - The Love Season reviews
Follow @fullhyderabad
Follow fullhyd.com on
About Hyderabad
The Hyderabad Community
Improve fullhyd.com
More
Our Other Local Guides
Our other sites
© Copyright 1999-2009 LRR Technologies (Hyderabad), Pvt Ltd. All rights reserved. fullhyd, fullhyderabad, Welcome To The Neighbourhood are trademarks of LRR Technologies (Hyderabad) Pvt Ltd. The textual, graphic, audio and audiovisual material in this site is protected by copyright law. You may not copy, distribute, or use this material except as necessary for your personal, non-commercial use. Any trademarks are the properties of their respective owners. More on Hyderabad, India. Jobs in Hyderabad.