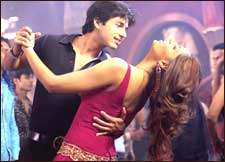 Ghazala Rizvi / fullhyd.com
EDITOR RATING
5.0
Performances
Script
Music/Soundtrack
Visuals
NA
NA
NA
NA
Suggestions
Can watch again
NA
Good for kids
NA
Good for dates
NA
Wait for OTT
NA
In spite of Einstein's insistence that there are only atoms and empty spaces while everything else is just an opinion, director John Mathew has produced a flick that threatens to have only empty spaces - in the audience seats. But then, Einstein never reckoned with Ajay Devgan. If a man ever defies any law of physics, it'll be Devgan.

In Shikhar, he plays an anti-hero, Gaurav Gupta - a construction tycoon who builds castles over other people's skeletons. Mammon is his God and Natasha (Bipasha Basu), his slave. Gaurav hobnobs with politicians to acquire the tribal land of Sonegarh, and Hrishi Van, an orphanage and ashram run by Hrishi Vardhan (Jawed Sheikh).

When money and power fail, Gaurav seduces Vardhan's son Jaydev (Shahid Kapoor) into friendship and compliance. Jay's initiation into the city-life's blitzkrieg leaves him enervated and corruptible, much to the chagrin of his father. Madhavi (Amrita Rao), while playing peekaboo with Jay and singing precisely 3 sweet songs, does little to diffuse the situation.

Soon realization dawns on Jay, and Gaurav's plan starts backfiring. But what could have been the highlight of the flick just goes fizz - Shahid's retrospection and revenge that ensue are meek and fallow. The movie meanders to and fro between the conundrums of the city-living and the rural calm. In the absence of any story after this point, Shikhar simply drags on, not realizing that, like an overly stretched rubberband, it is post its utility as well as past retrieval by now.

In an attempt to crossbreed the glam with the drab, and the naked ramp scene with the naked poverty, director John Mathew ends up with a stillborn. Shikhar fails in its most elementary requirement, as an entertainer. It's not guilty of recycling the clichéd story of unscrupulous business exploiting poor tribals - its crime is, not packaging it well enough. Unlike Swades, Shikhar lacks pathos, and it doesn't stir anything within you, not even momentarily.

The rustic bliss depicted is utopic, and the politics-biz-crime nexus boring. From eco-friendliness to corporate ethics, and from business strategy to man-management, Shikhar touches upon everything, like a butterfly flitting across diverse flowers and never settling down on any. You get to see a lot of redundant work, and flax outcome.

The first half (which, by the way, runs the whole length of Neal 'N' Nikki) is, for want of a better word, quite interesting. It has a religiously dieted and exercised Bips with her long legs and husky voice, and it has Ajay sporting the latest out-of-bed hairdo, smoking Havana cigars and oozing in loads of attitude. While Shahid is there throughout, the second part, being low on both Ajay and Bips, simply splutters, hiccups and goes flat.

Shikhar takes too long to climax, and in the process, tires even the most ardent of Devgan's fans. Devgan, and probably not Shahid, will be the reason that you might end up in the theater. Shahid will rightfully join the league of men soon, but not yet. Not with Shikhar.

With all the super-savvy tech, and a swelte Bipasha Basu to boot, it must've taken quite an effort to convert this one into a dud.
Share. Save. Connect.
Tweet
SHIKHAR SNAPSHOT

ADVERTISEMENT
This page was tagged for
Shikhar full movie
shikhar movie hindi
Shikhar full move
shikhar ajay devgan full movie
shikhar full movie
Follow @fullhyderabad
Follow fullhyd.com on
About Hyderabad
The Hyderabad Community
Improve fullhyd.com
More
Our Other Local Guides
Our other sites
© Copyright 1999-2009 LRR Technologies (Hyderabad), Pvt Ltd. All rights reserved. fullhyd, fullhyderabad, Welcome To The Neighbourhood are trademarks of LRR Technologies (Hyderabad) Pvt Ltd. The textual, graphic, audio and audiovisual material in this site is protected by copyright law. You may not copy, distribute, or use this material except as necessary for your personal, non-commercial use. Any trademarks are the properties of their respective owners. More on Hyderabad, India. Jobs in Hyderabad.