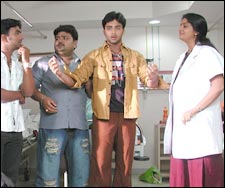 Priyanka Pulla / fullhyd.com
EDITOR RATING
6.0
Performances
Script
Music/Soundtrack
Visuals
NA
NA
NA
NA
Suggestions
Can watch again
NA
Good for kids
NA
Good for dates
NA
Wait to rent it
NA
The first half of Gautam SSC is a burst of buntings, streamers, tinsel and foam - a swirling riot of color, a bubblegummy ball. Every impetus qualifies as an excuse to break into another fancy-free song-and-dance number with novel choreography and dreamy sets. The Disneyland ride feel goes on for so long, you start worrying ‘cause there seems no way to take the story forward.

Then, of course, director Arun Prasad just goes ahead and joins the bandwagon, and you realize he was just waiting… prolonging the pleasure. Coitus – darned – reservatus. In the end, the natural cycle, the clichéd story, the pull of the crowd will always win.

Well, anyway, pleasure dilation techniques apart, here is the story: Gautam (Navdeep), the dark horse of the illustrious family of Collector Shambhu Prasad, is barely SSC passed, and quite proud of this distinction. Between his pranks and the disproportionate humiliation he suffers at the hands of his reprimanding father, is all the shimmy and boogie-woogie we mentioned, that makes the movie so much fun. He has a bunch of friends with whom he tumbles along between performing daredevil stunts for kicks and bucks, and his neighbor’s (Bhanupriya) house for dosas and kind words that are sorely wanting from his own family.

When a cousin Bhramara (Madhu Sharma) visits from the US, he pursues her with all but a hanging tongue, and dances a steamy number with her erogenous zones. Janaki (Sindhu Tolani) is a private tutor for his cousins, and another one of his dance partners. The blessed state of affairs goes on till the interval, when Gautam plays one prank too many. He forges his dad’s signature leading to a near arrest of the revered IAS officer.

Here is when Gautam SSC officially joins the growing platoon of movies that pull off a flying start and then patter down to a crawl. Chariots turn into pumpkins and horses into mice, both for you and the hero, as he is thrown out of his house and the hamming begins. He pushes off to stay with Janaki and turns mechanic. And sets about winning back the members of his family, move by maudlin move. It doesn’t help your patience that his family could qualify for a part in Mahabharata for its sheer size.

Our scruffy schoolboy then designs a motorbike carburetor, which gives a mileage of 120km per litre. And he beats up so many goons that that is the dominant image of him that leaves the theater with you. The last pin to knock is his hard-baked father, but this he manages with a master stroke, and this one does comes as a well-kept surprise that gives you a warm, fizzy, sparkling feeling.

But between the time Gautam is ejected from his house to when he is welcomed back, is the risky zone where audiences might just walk out, unable to take the stacked up minutes of enforced tears. As if their life depends on it, the makers of this one try to squeeze out every last ounce of possible grief from that point in the movie. Until the sadness reaches a plateau, and you are whiny and irritated like a pre-schooler who’s walked 3/4ths of the numaish and wants to be carried now. And then, suddenly, the water runs clear, and we reach the rousing end.

Navdeep does an excellent job, carrying the film on his shoulders. The histrionics seem to come easy to him, and he does them full justice. Sindhu Tolani, as his patient friend and lover, is adequate, as she carries out her act of pressing her eyelids shut, time and again, to reassure Gautam. Bhanupriya as the plump, maternal next-door neighbor is sweet.

En fin, a good popcorn flick, but your bag may get a little extra salty with all the tears in the second half. The beginning and end, though, make it worthwhile of at least one good dekko. But don’t wonder if it will give King Kong a run for its money.

ADVERTISEMENT
This page was tagged for
Gautam SSC telugu movie
Gautam SSC reviews
release date
Navdeep, Sindhu Tolani
theatres list
Follow @fullhyderabad
Follow fullhyd.com on
About Hyderabad
The Hyderabad Community
Improve fullhyd.com
More
Our Other Local Guides
Our other sites
© Copyright 1999-2009 LRR Technologies (Hyderabad), Pvt Ltd. All rights reserved. fullhyd, fullhyderabad, Welcome To The Neighbourhood are trademarks of LRR Technologies (Hyderabad) Pvt Ltd. The textual, graphic, audio and audiovisual material in this site is protected by copyright law. You may not copy, distribute, or use this material except as necessary for your personal, non-commercial use. Any trademarks are the properties of their respective owners. More on Hyderabad, India. Jobs in Hyderabad.