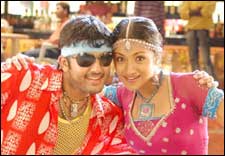 Priyanka Pulla / fullhyd.com
EDITOR RATING
5.0
Performances
Script
Music/Soundtrack
Visuals
NA
NA
NA
NA
Suggestions
Can watch again
NA
Good for kids
NA
Good for dates
NA
Wait to rent it
NA
They tell you that K Raghavendra Rao means guaranteed navel show (NS). They tell you that even if he managed to rope in Meg Ryan, he would force her to do some NS. The sets would be full of fruits and flowers, and some of them would be flung across strategically at the passionately quivering Ns.

And boy, are you impressed! ½ hour into the movie, and the NS begins exactly as described. You nearly double over with happy laughter. Now here is a director who knows how to deliver exactly what is expected of him, movie after movie. From Trisha’s enviable washboard, to Rathi’s, more South-Indian and with the homely beginnings of a paunch, all the navels quiver uniformly in Allari Bullodu, in synchronized, flower-embellished ecstasy. And the crowds cry out in glee to the background of the reduplicative song lyrics: "Neppi Neppi Neppi Neppi...", "Taaka Taaka Taaka Taaka...", "Wah Wah Wah Wah..." etc.

Allari Bullodu is a 3-hour comic caper, which can win an award for the most nonsensical storyline ever, and reminds you of that ball of yarn that the kitty got left loose with. But like Draupadi’s divine vastra, this yarn keeps coming and coming, and the said kitty goes absolutely mad with glee.

This yarn is about Raj (Nitin), who fabricates the story of an evil twin Balu (Nitin) to explain away an unfortunate episode that would otherwise show him in poor light to his girlfriend Trisha (Trisha). Usha (Rathi) falls in love with the non-existent Balu, and to create further confusion, an actual lookalike of Raj, called Munna, lands up from Mumbai.

Everyone is chasing a construction contract and trying to beat Kareem Lala (Saurabh Shukla) to the tender submission deadline. Trisha is the MD of Laxmi Constructions, and Nitin is her sidekick, general manager and boyfriend.

Thus are laid the foundations of this latest KRR roller coaster of madness. Trisha and Rathi look gorgeous as sisters, and Nitin is full of energy as the multi-roled Allari Bullodu. All of Tollywood’s comic superheroes predictably hang around, blessing the movie like a pantheon of Indian gods.

This flick bears a look of something put together within an inspired half an hour by the directorial team. How it manages to run for three hours is, therefore, an interesting question. The plot zips fast haphazardly, with the actors almost panting visibly trying to hang on to it. You close your eyes for two seconds and you will have missed a lot, and at the same time missed absolutely nothing. There is plenty of humor, yes, and what it lacks in quality, it makes up in quantity.

You could run a timer and clock the average number of jokes per minute and watch the movie according to how much featherweight, second-grade tickles you feel you have the appetite for. If you are looking for anything mildly intellectual, it's odd you are even reading this review.

At its best, Allari Bullodu is a flick most people can tolerate. And probably find entertaining, if they are not feeling too judgmental that day. Else, it's better to avoid this one. Unless you distinctly share KRR’s fetish for navels, fruits and flowers, you might prefer to catch some of the slightly less raucous movies running in town.
Share. Save. Connect.
Tweet
ALLARI BULLODU SNAPSHOT

ADVERTISEMENT
This page was tagged for
Allari Bullodu
Allari Bullodu telugu movie
Allari Bullodu reviews
release date
Nitin, Trisha
Follow @fullhyderabad
Follow fullhyd.com on
About Hyderabad
The Hyderabad Community
Improve fullhyd.com
More
Our Other Local Guides
Our other sites
© Copyright 1999-2009 LRR Technologies (Hyderabad), Pvt Ltd. All rights reserved. fullhyd, fullhyderabad, Welcome To The Neighbourhood are trademarks of LRR Technologies (Hyderabad) Pvt Ltd. The textual, graphic, audio and audiovisual material in this site is protected by copyright law. You may not copy, distribute, or use this material except as necessary for your personal, non-commercial use. Any trademarks are the properties of their respective owners. More on Hyderabad, India. Jobs in Hyderabad.