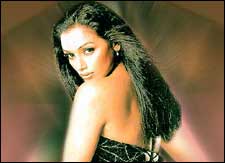 Rohit Murari / fullhyd.com
EDITOR RATING
1.0
Performances
Script
Music/Soundtrack
Visuals
NA
NA
NA
NA
Suggestions
Can watch again
NA
Good for kids
NA
Good for dates
NA
Wait for OTT
NA
Fewer things are more disconcerting than being the lone person in the balcony of a cinema hall. Okay, making a grammatical error like the one in the previous sentence (fat chance that we will tell you what the blooper is) far outweighs anything else but that is not the point of this review.

As a policy, fullhyd.com has never made a point in any of its editorial content, for there is a certain charm in being absolutely pointless. There is no reason why we should deviate from tradition. Also, I have managed to get that much closer to my word limit. To the review then.

Dhamkee tells the tale of the underworld-police liaison the way none of the 21,932 movies before it did. By taking it to a whole new level of suckiness. After an excruciatingly painful (or should that be painfully excruciating?) narrative, it starts to find its feet. Suddenly there is a plethora of skimpily dressed women gyrating to item numbers.

Vijay Saxena (Rajat Bedi) is a cop par super. He is omnipresent, which is to say that he is anywhere that has a damsel in undress... oops distress! His skills, not with the women (stop your dirty minds from loitering, I tell you), get him transferred to Mumbai to take up a challenging assignment - knock down the network of don Guru Sawant (Milind Gunaji).

Guru is a peculiar kind of a don. When he is not in the throes of the orgasmic lures of Chandni (Shweta Menon), a bar dancer, he is looking for ways to do just that. Sometimes, he also makes extortion calls. This time, though, he calls the wrong man, JD, who promptly reports it to the police.

Vijay is not one to take his job half-heartedly. He goes all out guarding JD’s family. It must be said here that he spends an inordinately long time guarding the body of JD’s nubile daughter, Preeti (Kashish). We know she is nubile because she has most of her err... nubility ummm... strategically displayed.

Loads of fistfights, gunshots and skin-show later, Guru thinks it is time to give the police a slip for good. He runs away to Dubai. What? The villain runs away and our hero does nothing to stop him? Plainly put, no. Hero does nothing. He abets Guru in his escape, but since that is not related to how he could have done something to stop Guru’s run, we are not going to digress and discuss that. Big deal.

So, the hero turned out to be the villain? At least the movie ended. Sometimes one just has to see the silver lining, and leave it at that.

As far as B-grade movies go, this one comes the closest to perfection that I have seen. The editing has more jerks than a ride in a dune buggy, the naked women have as much sex appeal as a road accident, and the screenplay is as taut as a beer-belly. The only thing going for it is its duration of about 105 minutes.

The question that needs to be asked is whether that is reason enough to add to the population of that balcony.
Share. Save. Connect.
Tweet
DHAMKEE SNAPSHOT

ADVERTISEMENT
This page was tagged for
Dhamkee hindi movie
Dhamkee reviews
release date
Rajat Bedi, Milind Gunaji
theatres list
Follow @fullhyderabad
Follow fullhyd.com on
About Hyderabad
The Hyderabad Community
Improve fullhyd.com
More
Our Other Local Guides
Our other sites
© Copyright 1999-2009 LRR Technologies (Hyderabad), Pvt Ltd. All rights reserved. fullhyd, fullhyderabad, Welcome To The Neighbourhood are trademarks of LRR Technologies (Hyderabad) Pvt Ltd. The textual, graphic, audio and audiovisual material in this site is protected by copyright law. You may not copy, distribute, or use this material except as necessary for your personal, non-commercial use. Any trademarks are the properties of their respective owners. More on Hyderabad, India. Jobs in Hyderabad.