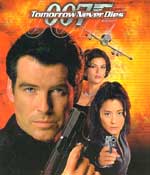 The evil genius of this one is Eliot Carver, a media mogul who wants to rule the world. We all want to, but Carver takes the thought seriously and begins some hi-tech wizardry, which brings Britain and China to the brink of war. You see, Carver doesn't want to restrict himself to making money from reporting news, he actually wants to make it happen.

In exchange for an exclusive media contract in China for 100 years, The Carver Entertainment Group, one of the world's leading entertainment companies, conspires to create an event to propel a new Chinese leader into power. Carver, the head of the Carver Group, actually designs his own situation and takes his own pictures to create his own war. The Global Positioning Satellite System is hacked allowing a US warship to be sent off course into Chinese waters. The plan is for it to appear that Chinese planes shot up the crew. Ultimately, the plan is thwarted.

This is where Bond comes in, all dressed to the nines, falling off buildings, slamming into driveways, zooming on a bike with a petite Chinese. The movie moves from Germany to the back alleys of Bangkok. Bond's love interest in this movie is Carver's wife, played by Terri Thatcher. She is as insipid as it gets. The other femme fatale in this flick is Michelle Yeoh, Bond's brother-in-arms till about the end. She kicks ass with Bond with an Oriental fury, which makes you beam with happiness.

The whole movie of course takes a free fall once Bond gets to know of the plan and sets out to save the world from the Satanic Carver. And a new meaning is accorded here to the term 'back seat driver' as Bond gets his gizmo gadgetry for his BMW. Not one to stir anybody else's martinis, this flick has a whole load of gravity defying action.

A typical Bond movie per se, Tomorrow Never Dies has all the prerequisites that were listed by its predecessors. But I must say that Pierce Brosnan, while extremely easy on the eyes, lacks the Big Bad Wolf charisma that Sean Connery had made the trademark of the superspy. Michelle Yeoh breaks away from the glam Bond girl mould and shows that she has a mind of her own. She kicks, grunts and kung-fus her way out of situations. Armed to her teeth with martial arts, she gives a whole new dimension to the term sidekick.

A surprise in the movie is the casting of Judi Dench as M. She is absolutely fab and is great fun to watch. But best of all is Desmond Llywwen, who has been playing Bond's gadget master in every film since 'From Russia With Love' in 1963. His grouchy approach to Bond as he reluctantly hands his gadget masterpieces makes you believe that Bond is an adolescent with a penchant for destruction.

Well, is it worth your money? The director seems to have reduced Bond from the suave agent he was to a mindless stuntman. There are action scenes and there are action scenes. The gadgets and the jumping-off-from-every-available-place get on your nerves a bit, and you crave for those punchy one-liners. What the hell, we aren't working on a Ph.D. here. So if you are looking for something full on escapism and want to indulge in some Bondage, go out and watch this new man who calls himself Bond, James Bond.
Share. Save. Connect.
Tweet
TOMORROW NEVER DIES SNAPSHOT

ADVERTISEMENT
This page was tagged for
Tomorrow Never Dies english movie
Tomorrow Never Dies reviews
release date
Pierce Brosnan, Michelle Yeoh
theatres list
Follow @fullhyderabad
Follow fullhyd.com on
About Hyderabad
The Hyderabad Community
Improve fullhyd.com
More
Our Other Local Guides
Our other sites
© Copyright 1999-2009 LRR Technologies (Hyderabad), Pvt Ltd. All rights reserved. fullhyd, fullhyderabad, Welcome To The Neighbourhood are trademarks of LRR Technologies (Hyderabad) Pvt Ltd. The textual, graphic, audio and audiovisual material in this site is protected by copyright law. You may not copy, distribute, or use this material except as necessary for your personal, non-commercial use. Any trademarks are the properties of their respective owners. More on Hyderabad, India. Jobs in Hyderabad.