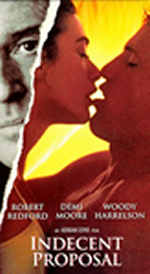 Ajay Bhashyam / fullhyd.com
EDITOR RATING
7.0
Performances
Script
Music/Soundtrack
Visuals
NA
NA
NA
NA
Suggestions
Can watch again
NA
Good for kids
NA
Good for dates
NA
Wait to rent it
NA
The name makes this look like one of the millions of those other movies, doesn't it? But if you cast your mind back, you just might remember that this was the film that shot Demi Moore to fame and set tongues wagging like only Basic Instinct managed to do before. Yet, the film is not about graphic scenes of adultery execution - it is a tale of trust and love, and a well-narrated one at that.

David Murphy (Woody Harrelson) and Diana (Demi Moore) are a married couple very much in love. But they've fallen on hard times and need 50,000 smackers pronto for a dream house that they've set their eyes on. David has a brainwave, they take whatever they've got and go to Vegas. He earns about 25,000, lays it all on the roulette table and (as if you didn't know!), loses it all.

Billionaire John Gage (Robert Redford) takes a liking to the beautiful Diana, and asks her to play for him in the casino because he thinks she's lucky. After some hesitation, she does, they win and Gage gets close to the couple. In an extremely well directed sequence (among some brilliant dialogues in the film, Gage's "Everything is for sale" stands out for simplicity), Gage pops the question - will David be willing to lend his wife for one night, for 1 million dollars?

After a lot of drama, the arrangement obviously takes place. The night finishes much faster than it need have, and everything is back to normal. Except David. He's just dying to know what happened and Diana won't tell him because she doesn't want to think it anything worth talking about. But David can't forget about it. And the couple falls apart and Diana leaves.

Soon, we learn that Gage has done everything he could to keep tabs on Diana - and he's now even bought their dream house from the agent. And now he even comes to her workplace as a client... anything to stay in contact with her. She soon falls for his irresistible charm (Redford is indeed a charmer) and David is left hanging and a wreck who's drinking himself to drunkenness continuously.

But he decides to pick himself up and get his life on track, and goes and meets Diana. But he can't get her now, and as a last gesture of love, buys her a hippopotamus in an auction that she and Gage are bidding at - for 1 million dollars.

Redford is unbelievably handsome (it's hard not to fall for him!). He lives up his billionaire role to the hilt. Harrelson just has to look dumped and dejected, and he does that well, too. What can I say about Moore - she looks like she really, really loves Woody, and that, I must say, is good acting! Moore looks amazingly cute and desirable, and Redford and her make a really good-looking couple, however that sounds in this context.

Some of the dialogues are quite good - the subtlety that makes Hollywood so different from our own melodramas is in bloom some places in the film, like when a drunken David likens Redford to a cuckoo that lays its eggs in the nests of other birds, in the sequences when David and Diana are drifting apart, and towards the end at the auction and when Gage lets Diana go in a maneuver that is handled well.

Like I said, a story about trust and love more than the indecent proposal, and this stands out for some good performances (especially Redford's) and dialogues, with the sentimental stuff handled quite well. Of course, there are some intimate scenes, so be careful whom you're watching it with.
Share. Save. Connect.
Tweet
INDECENT PROPOSAL SNAPSHOT

ADVERTISEMENT
This page was tagged for
Indecent Proposal english movie
Indecent Proposal reviews
release date
Demi Moore, Woody Harrelson
theatres list
Follow @fullhyderabad
Follow fullhyd.com on
About Hyderabad
The Hyderabad Community
Improve fullhyd.com
More
Our Other Local Guides
Our other sites
© Copyright 1999-2009 LRR Technologies (Hyderabad), Pvt Ltd. All rights reserved. fullhyd, fullhyderabad, Welcome To The Neighbourhood are trademarks of LRR Technologies (Hyderabad) Pvt Ltd. The textual, graphic, audio and audiovisual material in this site is protected by copyright law. You may not copy, distribute, or use this material except as necessary for your personal, non-commercial use. Any trademarks are the properties of their respective owners. More on Hyderabad, India. Jobs in Hyderabad.