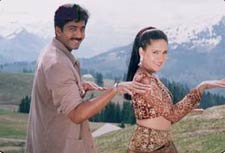 Firstly, this film is a good learning experience for a lot of people - Tollywood now knows one more way that a film can flop.

Then, with Naveen Vadde we can only look forward to better things in life. He's starred in 4 films in one year now (Chaala Baagundi, Maa Aavidameedottu..., Subhakaryam and now this) with ratings of 2, 1, 1 and 1.5, so things can only move up - for him (with better films, which, given his histrionic capabilities, appears unlikely), or for all of us (if this ends it all).

Then, the film has done the Canadian economy a whole lot of good - a whole lot of the budget was spent there (the temptation to use alternate words for "spent" is overwhelming, but I'm being optimistic, remember?). Combined with a similarly expensive release last week, that's a whole lot of gratitude Tollywood has earned from the Canadians.

See, I knew I could do it! Three whole points!

Now to earn back my credibility, here's the true story. Cheppalani Undi is an expensive mistake that a lot of people will pay for, and hopefully you won't be among them. The tale starts by showing Vinay (Naveen) winning the 800m track event at the world championships held at Toronto, and setting a world record in the process. It's difficult to say why. The whole thing appears conjured up to show some Canadian landscape in the ensuing song and dance (can you beat that - Tollywood is trying to be logical about them?), and I rest my case in calling the movie an expensive mistake.

Anyway, Vinay returns home and is longing to meet his ladylove Priyanka, who happens to be his uncle's daughter. Enter Priyanka - only to shock him by expressing her love for her classmate and asking his help in getting married. Vinay, being the hero, has a large heart, and agrees.

To dissuade his family from forcing Priyanka to get married to him, Vinay gets the photograph of a dead woman (which he cuts out of a newspaper) and convinces everybody that he is deeply in love with that woman. To Vinay's surprise, the presumed dead woman turns up at his home as Vani (Raasi), and is immediately accepted by Vinay's family as his would-be wife.

Vinay is justifiably piqued, and tries all tricks in the book to find out who she is (and in the process leaves you wondering how stupid one can get). Vani finally reveals her story in a flashback - about her brother-in-law (Prakash Raj) murdering her twin sister Rani (Raasi again) so that he can get married to Vani, and her (Vani) escaping from his clutches.

After hearing to the story, it's the hero's turn to fall in love with her. After a bit of running about around the Canadian flora, they decide to get married, with the blessings of Vinay's family. At the marriage there is a twist with Prakash Raj making a convoluted attempt at getting Vani back with the help of other assorted villains, but the attempt is thwarted by Vinay who displays his martial art skills and saves the day.

And thus all is well that ends well - only, you come out with a feeling of being had.

The thought uppermost in your mind as you walk out is that after so much money went into this, the final product is so shoddy. The camerawork is bad, the screenplay is nonexistent and the performances none too remarkable. Naveen can seriously consider an alternative career in athletics (and spare us the histrionics, in case you missed the point). Raasi does a decent job considering the limited scope of the character that she essays. It's about time Prakash Raj did some justice to his talents, and I guess he can start with dropping the staccato style of rendering dialogues - it's beginning to grate. The other performances are best forgotten.

The comedy line is quite predictable, and other then an occasional chuckle, does not provide any much-needed relief. The music by Mani Sharma is all right, with a quiet a few tunes you would love to hum in the bathroom - but it is clearly not on par with his best work. The film boasts of quite a few prominent choreographers including Raju Sundaram, Chinni Prakash and Lawrence, and one has to admit that they do manage to put the artists through their steps. That and Canada are the saving graces of what is an eminently forgettable movie.
Share. Save. Connect.
Tweet
CHEPPALANI VUNDI SNAPSHOT

ADVERTISEMENT
This page was tagged for
chepaalaniundi movie
cheppalani vundi telugu movie
cheppalani vundi wiki
cheppalani vundi wikipedia
cheppalabi undi telugu movie remake
Follow @fullhyderabad
Follow fullhyd.com on
About Hyderabad
The Hyderabad Community
Improve fullhyd.com
More
Our Other Local Guides
Our other sites
© Copyright 1999-2009 LRR Technologies (Hyderabad), Pvt Ltd. All rights reserved. fullhyd, fullhyderabad, Welcome To The Neighbourhood are trademarks of LRR Technologies (Hyderabad) Pvt Ltd. The textual, graphic, audio and audiovisual material in this site is protected by copyright law. You may not copy, distribute, or use this material except as necessary for your personal, non-commercial use. Any trademarks are the properties of their respective owners. More on Hyderabad, India. Jobs in Hyderabad.