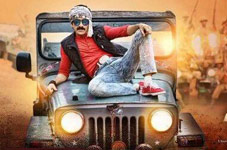 Ravi Kandala / fullhyd.com
EDITOR RATING
4.0
Performances
Script
Music/Soundtrack
Visuals
6.0
3.0
3.0
6.0
Suggestions
Can watch again
No
Good for kids
No
Good for dates
No
Wait for OTT
No
You perhaps remember Dhoom 2 - the one with Hrithik Roshan and Aishwarya Rai. It was joked that if all the slo-mo scenes were removed from that, the movie would've been done in half an hour. The film had an enervating number of scenes where characters in designer wear walked in a near-nauseating slow motion towards the camera while the Dhoom theme played in the background in varying tempos.

Bengal Tiger, in its runtime of 151 minutes, has around 50 minutes of such slo-mo sequences. These fifty minutes are enough to cause hearing loss, but just to pile on the agony, there's another 25 minutes of song sequences with equally loud music. That ensures you're certainly deaf. And by the time the climax with some chanting in the background ends, your ears will be bleeding.

And it's not just your ears - brain damage is certain, too. The manner in which director Sampath Nandi recycles scenes from his previous hit Rachcha will leave you wondering if he himself had memory loss. The climax is so stunningly similar, you'd wonder if he'd shot both the climaxes at once and then shot two different movies to precede them. And the rain song in this one too is so close to the one in Rachcha, you will begin to wonder if he used Tamannah's leftover montages from that shoot here.

It is perhaps not necessary any more to talk about Bengal Tiger's plot, but here goes anyway. Bengal Tiger is about Akash Narayan (Ravi Teja), a happy-go-lucky guy living in a village. Akash once goes to see a girl, a prospective alliance fixed by his relatives, and is rejected by her. The girl says she wants to marry someone famous, someone who is a celebrity.

Akash decides to get famous, and begins by throwing a stone at a minister (Sayaji Shinde) who visits his village. The minister finds out that he did it only to become famous, and likes his spirit and employs him. A few days later Akash shifts into the offices of the Home Minister Rayappa (Rao Ramesh). Rayappa's daughter Shruti (Rashi Khanna) falls in love with Akash. Rayappa agrees to the match, too, but when he announces the wedding, Akash announces that he loves Meera (Tamannah), who's the daughter of the Chief Minister Ashok Gajapathi (Boman Irani).

The remaining part of Bengal Tiger revolves around the reasons why Akash plays this game and how he upholds his father's honour (totally unrelated, we know, but it happens).

Bengal Tiger has one thing going for it - "30 years" Prithvi's comedy. Prithvi yet again does a hilarious character that goes slightly overboard at times, but manages to make you laugh for a good bit in the first half. However, he's sidelined in the second half, and with him also go any hopes of the movie providing you any more entertainment. Sampath Nandi recycles too many scenes from his solitary hit. He also attempts to woo the masses by providing them with liberal doses of skinshow from both the leading ladies, but we're assuming the masses have gone past that stage. Then, the fights are one too many, the clichés flow like there's no tomorrow, and the punch lines keep coming at a furious pace and even in scenes that do not merit them.

Ravi Teja looks photoshopped - there is an unnatural glow and smoothness to his face that just makes you look away. His acting is as solid as ever, and the Mass Maharaja retains his comic timing. Tamannah and Rashi Khanna show skin, and that's pretty much their raison d'etre. The remaining cast is wasted - bringing in Boman Irani for a teeth-gnashing role was especially unnecessary. The music is loud and noisy - it almost looks like Bheems Ceciroleo worships Thaman.

The scariest thing about Bengal Tiger is that it might end up becoming a hit due to Ravi Teja's following in the masses. If that does happen, God save us from a spate of similar movies. And if it doesn't, there's still hope for Tollywood.
Share. Save. Connect.
Tweet
BENGAL TIGER SNAPSHOT 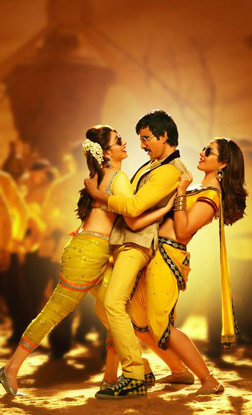 ADVERTISEMENT
This page was tagged for
Bengal Tiger telugu movie
Bengal Tiger reviews
release date
Ravi Teja, Tamannah
theatres list
Follow @fullhyderabad
Follow fullhyd.com on
About Hyderabad
The Hyderabad Community
Improve fullhyd.com
More
Our Other Local Guides
Our other sites
© Copyright 1999-2009 LRR Technologies (Hyderabad), Pvt Ltd. All rights reserved. fullhyd, fullhyderabad, Welcome To The Neighbourhood are trademarks of LRR Technologies (Hyderabad) Pvt Ltd. The textual, graphic, audio and audiovisual material in this site is protected by copyright law. You may not copy, distribute, or use this material except as necessary for your personal, non-commercial use. Any trademarks are the properties of their respective owners. More on Hyderabad, India. Jobs in Hyderabad.