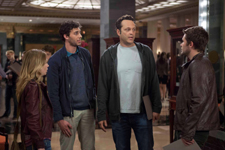 Nupur Barua / fullhyd.com
EDITOR RATING
5.0
Performances
Script
Music/Soundtrack
Visuals
6.0
5.0
6.0
6.0
Suggestions
Can watch again
No
Good for kids
No
Good for dates
Yes
Wait to rent it
Yes
Vince Vaughn's nasal voice may sound really hot to some people, but with his latest movie, his appeal may reduce. It has nothing to do with his acting - he just speaks too much in his latest movie, Delivery Man, and not in his usual fast-speak wisecracking manner. For those who have watched Vicky Donor, the premise of the movie may seem familiar, but know that this Vince Vaughn release is a remake of Starbuck, a French-Canadian film directed by Ken Scott.

When he was a younger man, David Wozniak (Vince Vaughn) donated his sperm at a Quebec sperm bank. He has spent the 23 years since that fateful day, just existing. His father (Andrzej Blumenfeld) is a butcher, and David becomes his delivery man.

His mundane life is coloured by two aspects - his pregnant girlfriend Emma (Cobie Smulders), and the thugs he owes money to. Emma is tired of David's lack of responsibility, and the thugs are tired of chasing him.

And then he gets a call. The sperm he donated fathered 533 children. And some of them have joined hands to slap a case against the sperm bank and clinic, to force them to reveal the identity of this anonymous donor. Not quite sure how to handle this information, David turns to Brett (Chris Pratt), his best friend who is also a lawyer.

Will he reveal his identity to his children? And will he be able to repay the men he owes money to? Only time will tell.

And at almost two hours, time is a luxury the movie possesses in abundance. In an effort to make a tearjerker, the makers of the film go slightly overboard with the emotions and the dialogues. Of course it is predictable - that is a given. One presumes that the idea was to present a feel-good tale of an underdog rising to the occasion, and to stress that life does not always have to be all that bad.

What works for the movie is that all these intentions are clear - there is no ambiguity there. The problem basically lies with the structure and the narration, bringing to mind the word "confusion". The screenplay jumps from one plot to another, leading to a climax that should leave you feeling a lump in your throat. It is not Ken Scott's fault that movie audiences have become more cynical, but he could have updated his take on what makes a moment moving.

The humour, another given with the presence of Vince Vaughn, is slightly jaded. There are plenty of giggle-worthy moments, though. The conversations that David has either with his father or with Brett are funny in parts.

Also, the romance between Emma and David does not come across as passionate enough to warrant a change of heart as far as the latter is concerned. The presence of 533 children is a metaphor for parenting, or something like that, but the exaggerated situations that the protagonist finds himself in take away from the poignancy of the topic.

Vince Vaughn does his bit, but he seems slightly uncomfortable in a movie that does not have OTT comedy. Besides, he has to be more introspective than goofy, and he seems to struggle with that a little.

Cobie Smulders is too serious, given her penchant for comic timing, as proved in How I Met Your Mother. Chris Pratt and Andrzej Blumenfeld provide the much-needed relief whenever the movie threatens to become too sombre.

Technically, the movie is slightly above average. However, there is not a single sequence or scene that stands out as being original - the entire movie relies heavily on tried and tested visuals, and that makes the production and costume designs unexciting. The editing could have been crisper, too.

If you have watched Vicky Donor, and want to watch something along similar lines, this may be the movie for you. It would not be fair to compare the two, but this movie speaks more frankly on the merits and demerits of sperm donation, with more adult humour thrown in. Delivery Man is not a ground-breaking film (like Vicky Donor was in India), nor is it Vince Vaughn's best, but it may be a much-needed break from your daily schedule.
Share. Save. Connect.
Tweet
DELIVERY MAN SNAPSHOT 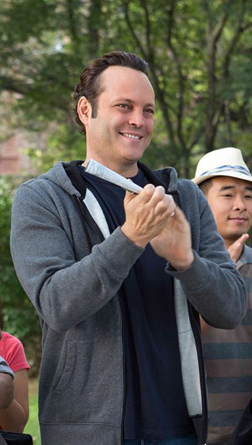 ADVERTISEMENT
This page was tagged for
Delivery Man english movie
Delivery Man reviews
release date
Vince Vaughn, Chris Pratt
theatres list
Follow @fullhyderabad
Follow fullhyd.com on
About Hyderabad
The Hyderabad Community
Improve fullhyd.com
More
Our Other Local Guides
Our other sites
© Copyright 1999-2009 LRR Technologies (Hyderabad), Pvt Ltd. All rights reserved. fullhyd, fullhyderabad, Welcome To The Neighbourhood are trademarks of LRR Technologies (Hyderabad) Pvt Ltd. The textual, graphic, audio and audiovisual material in this site is protected by copyright law. You may not copy, distribute, or use this material except as necessary for your personal, non-commercial use. Any trademarks are the properties of their respective owners. More on Hyderabad, India. Jobs in Hyderabad.