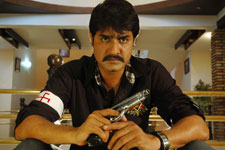 Kritika Deval / fullhyd.com
EDITOR RATING
5.0
Performances
Script
Music/Soundtrack
Visuals
5.0
5.0
4.0
3.0
Suggestions
Can watch again
No
Good for kids
No
Good for dates
No
Wait to rent it
Yes
Like many a Telugu movie out there, Sevakudu has an engaging enough, if not quite unheard-of, story that gets almost completely hidden behind the Tollywood-typical preening and posturing, and the unnecessary "romance" tracks.

So, what's it all about? Surya (Srikanth) is the son of Ramachandrayya (Nasser), a head constable who loves his uniform the way he would his own skin. Ramachandrayya's only dream is to make his son see the police in the same light he does, and to have Surya become an IPS officer who will change the system. Surya, on the other hand, knows enough of the existing "system" to not want to get anywhere near it.

However, he believes in justice, and goes about getting it in his own ingenuous ways. For instance, when a friend's sister is sent a letter from a stalker, Surya takes a copy of the letter and sends it to the homes of all the girls in the city with his friend's sister's name, all of whom gang up to go beat the living crap out of the stalker. Justice is served.

Meanwhile, Krishna Prasad (Krishna) is a well-meaning, if rather garrulous, NRI billionaire, who wants to come to Vijayawada and turn it into a "Golden City" by installing schools and hospitals that provide free education and health-care to the people. But, of course, in India, not to mention Andhra Pradesh, do-gooders are more likely to be killed off than lauded.

And, sure enough, Balram Jadoo (Pradeep Rawat), a local don with political aspirations, decides that Krishna's do-goodery will come in the way of said aspirations, and conspires with the police plan to assassinate Krishna. However, Ramachandrayya, who seems to be the only honest one of the lot, gets caught in the crossfire, and dies, as does Krishna.

Following much drama, way too much talking and punch-line-ing (the sheer number of baddies who could've been killed off if the good guys had just shot instead of yakked is astounding), and way, way too many fight sequences that'll leave you laughing until your sides hurt, the culprits are caught and put into prison. The END! You think. But no such relief.

It is here that this cross-breed of Leader, Oke Okkadu, and just about every other socio-political thriller, goes from being mildly amusing to utterly asinine. The cacophony of ideas, the bombardment of issues, the "outing" of corrupt entities, the struggle to squeeze a heroine into it all for the sake of what Tollywood calls glamour for reasons best known to itself - this is one very crowded film that simply doesn't do enough to keep you interested in the noise.

And, what is Charmme doing in all of that? We have no frickin' clue whatsoever. Starting the movie by beating up Surya for having stolen her statue of Lord Ganesha, as usual, she is chastened and turns into a devout follower of our hero, and pretty soon, fades into the background, only to smile occasionally and to heap praises on Surya once every while.

Srikanth does a decent enough job, but this writer dares anyone to not look ridiculous while mouthing most of his lines. Also, he could use a dancing lesson, or a hundred, if he insists on shaking his booty once every ten minutes. Nasser puts up a truly good show. Bramhanandam appears for about fifteen minutes throughout the movie as Ramachandrayya's son-in-law, and amuses not a whit.

As for Krishna, he could've done much better for what seems to be his last film, than to mouth a dialogue or two from his son's repertoire of punch-dialogues, even during the ten or so minutes he is on the screen.

The music, although having rather asinine lyrics (guddu, guddu - goes one supposedly empowering track), is actually pretty hummable. The background score is well executed. However, it is the screenplay and the special effects that'll have you laughing till you cry, as the most ridiculous things keep happening in front of you, like Srikanth turning 360 degrees in mid-air as if he were a picture!

Watch Sevakudu only if you wish to bid adieu to an earlier era of superstars. For any other reason, wait until you can watch it on TV.
Share. Save. Connect.
Tweet
SEVAKUDU SNAPSHOT 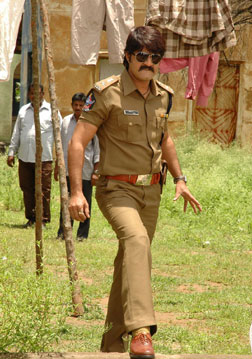 ADVERTISEMENT
This page was tagged for
sevakudu review fullhyd
Sevakudu telugu movie
Sevakudu reviews
release date
Srikanth, Charmi Kaur
Follow @fullhyderabad
Follow fullhyd.com on
About Hyderabad
The Hyderabad Community
Improve fullhyd.com
More
Our Other Local Guides
Our other sites
© Copyright 1999-2009 LRR Technologies (Hyderabad), Pvt Ltd. All rights reserved. fullhyd, fullhyderabad, Welcome To The Neighbourhood are trademarks of LRR Technologies (Hyderabad) Pvt Ltd. The textual, graphic, audio and audiovisual material in this site is protected by copyright law. You may not copy, distribute, or use this material except as necessary for your personal, non-commercial use. Any trademarks are the properties of their respective owners. More on Hyderabad, India. Jobs in Hyderabad.