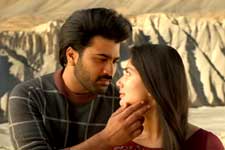 T J Reddy / fullhyd.com
EDITOR RATING
4.0
Performances
Script
Music/Soundtrack
Visuals
6.0
3.0
6.0
4.0
Suggestions
Can watch again
No
Good for kids
Yes
Good for dates
Yes
Wait to rent it
Yes
I watch all my movies in one very specific multiplex. It is about 3 kilometres away from my home and it plays everything from arthouse darlings to big budget blockbusters. There are two specific routes I take to make it to this 10-screen hallowed building of cinephiles. One of the routes sees me cutting through a park and getting there on foot, and the other one sees me driving on asphalt-laden roads. Unless I'm bestowed with the powers of flight a la Superman, these two routes will remain the only ones I'll be taking for the foreseeable future. I know every single shop lined across both sides of the street and every single crack on the sidewalk scattered across both these routes because I've traversed them oh so many times. Any changes I notice once every few months are merely cosmetic as the routes themselves remain the same.

The experience of watching Padi Padi Leche Manasu is somewhat similar. We use the word "somewhat" because the cosmetic changes made to this well-worn story aren't so novel either.

We begin our cinematic journey by being introduced to Surya (Sharwanand). A man riding (his manly motorcycle made for men) from Kolkata to Kathmandu pining to meet the love of his life who has been separated from him for a full year. A few clichéd shenanigans later, Surya finds himself in a police station explaining the hows and whys of his clichéd predicament to a clichéd police officer played by Ravi Kale (we wonder if we should use the C-word for this casting choice, too).

Surya was a carefree young man. A youth without a care in the world. A boy whose life didn't come packaged with the need for a job or a career or caring for anyone else but himself. Did we mention he was carefree? Just thought we would get that across again.

But then he saw a street play orchestrated by Vaishali (Sai Pallavi) and he soon realised that he cared about having this advocate for women's rights and soon-to-be doctor as his girlfriend. How does he go ahead approaching this seemingly intelligent girl, you may ask. The answer to the question would be stalking. Lots and lots of stalking. Didn't that courtship technique go out of fashion in the early 2000s? Apparently not.

But Vaishali, being the advocate for women's rights she is, rebukes his efforts, right? No, she does not. She has an inherent liking for men who beat other men up because they looked at her funny. She is more than content chasing shadows rather than having him talk to her like a well-adjusted person would. Maybe she isn't so smart after all. Her father (Murali Sharma) is a magistrate and might have had something to do with her getting into medical school.

These characters from a time gone by are slapped with plot devices older than the pyramids of Giza. Surya's aversion to commitment sees our lead duo separating for a year. They intend to use this time apart as a litmus test of their love for each other. One year, some bad CGI and some blatant exposition about a certain mental disorder later, we watched in awe as the movie reheated its first half and served it up all over again under new pretences. Why the filmmakers thought the same tired gimmickry would work the second time around in the same movie baffles us to this very moment.

Padi Padi Leche Manasu would work if it were the first romantic comedy you ever saw. Jangling a set of keys in front of a baby works because babies do not have fully developed tastes or an understanding of what keys actually are. Over time, babies too graduate to more interesting and intricate toys that challenge them physically and mentally. A bicycle requires them to learn physical balance, building blocks challenge them to imagine a world of their own, and soon enough the key bunch fades into the background as a slender set of rods that rotate a few cylinders to crack open a door or a padlock. Learning the inner machinations of the locking system might be interesting but the interest generated is finite as it doesn't ask for the learner's input or imagination.

However, the duo of actors tasked with making this age-old plot imaginative is in fine form. Sharwanand and Sai Pallavi are charismatic performers with a ton of screen presence to spare. Be it in the meditative Prasthanam, the engaging Journey or the disappointing Mahanubhavudu, Sharwanand has always offered himself up to his roles with no hesitation, and Sai Pallavi is right there matching his conviction beat for beat. Their dedication to their craft might create a case of an audience falling in love with the actors rather than the characters they are portraying.

The score enveloping their acting performances elevates their characters' budding romance more than the scatted writing ever does. There is a warmth to the extremely appropriate music underlining their every clichéd action. However, the songs and their tried and tested lyrics still smack of flawed penmanship, and the music is hit by the haphazard editing (both audio and visual). It's similar with the visuals - shots of cramped Kolkata streets and the iconic Howrah Bridge fail to impress simply because the scenes around these elements lack the appeal required to aid the audience in connecting to the movie.

And for that reason, we do not envy filmmakers who dare to dip their toe into romances. While the characters need only fall in love with each other, the audience needs to like, if not love, both the leading characters and the world they inhabit. A wise man once said, "The opposite of love is not to hate. The opposite of love is to be indifferent." Loving or hating a person or art requires a strong outpour of emotion. Being indifferent does not. Like those keys one played with as a kid or those routes one traverses on a daily basis, this film too will dwindle away demanding nothing more than indifference soon after the final frame fades away from your retina. It existed once. Nothing more, nothing less.
Share. Save. Connect.
Tweet
PADI PADI LECHE MANASU SNAPSHOT 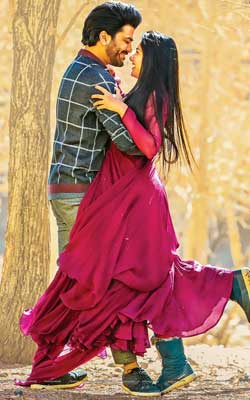