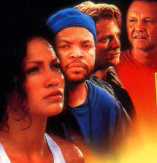 Feroz Hassan / fullhyd.com
EDITOR RATING
5.0
Performances
Script
Music/Soundtrack
Visuals
NA
NA
NA
NA
Suggestions
Can watch again
NA
Good for kids
NA
Good for dates
NA
Wait to rent it
NA
Ever wondered how much effort goes into making those exotic documentaries that you watch on NGC and Discovery Channel? Well if you are looking for the answers in a movie, then Anaconda is not the right one. If you are comfortable with that, which I am sure most of you would be, then just grab some popcorn but don't expect to be scared to death by this one. That way, you will be a touch surprised.

Terri Flores (Jennifer Lopez) is a documentary director, who is out in the Amazon basin trying to shoot an obscure - Shirishama - tribe. Everything appears to be going allright until the team rescues a guy whose boat is stranded in the river. The guy, Paul Serone (Jon Voight), starts flaunting his knowledge of the jungle, and even demonstrates his dexterity when it comes to dealing with the niggling worries that it throws up. But the problem is the way he does it. A smug brag is the last thing that the team wants, but they have to put up with him.

One thing that the team is not prepared for - but which Serone knows pretty well - is the giant snake, Anaconda. The snake not only crushes you in its embrace, it likes to gobble you, throw you out and eat you again. Serone's insistence on catching the snake alive leads to the death of two members. Finally, it all turns out to be a set up by Serone and the boat's driver. But the challenge before the survivors remains - how do they tackle the giant snake?

The thing that makes the movie tolerable is the fact that the dialogues aren't replete with those smart one-liners that will have you gasp in disbelief. The noise level does not force you to reach for the earplugs often, either. The settings of the movie are genuine. The wild setting is not as claustrophobic as those of some other monster movies.

The actual sight of the snake, onscreen, may or may not have you in thrall. If you are expecting too much, then you may be a touch disappointed. But there are a couple of scenes where it catches its prey in mid air. That should have you on the edge of your seat.

The performances are credible for the sole reason that not many shout their lungs out. Other than that, they are pretty average. Jennifer Lopez's presence, and not her histrionics, is an asset to the movie.
Share. Save. Connect.
Tweet
ANACONDA SNAPSHOT

ADVERTISEMENT
This page was tagged for
Anaconda Telugu movies
Anaconda telugu movie
Anaconda reviews
release date
Jennifer Lopez, Ice Cube
Follow @fullhyderabad
Follow fullhyd.com on
About Hyderabad
The Hyderabad Community
Improve fullhyd.com
More
Our Other Local Guides
Our other sites
© Copyright 1999-2009 LRR Technologies (Hyderabad), Pvt Ltd. All rights reserved. fullhyd, fullhyderabad, Welcome To The Neighbourhood are trademarks of LRR Technologies (Hyderabad) Pvt Ltd. The textual, graphic, audio and audiovisual material in this site is protected by copyright law. You may not copy, distribute, or use this material except as necessary for your personal, non-commercial use. Any trademarks are the properties of their respective owners. More on Hyderabad, India. Jobs in Hyderabad.